Flipkart is far from a household name in the U.S. Here's everything you need to know about Walmart's new prize.

It's official. After months of rumors, Walmart (WMT -0.93%) said Wednesday that it is making its biggest acquisition ever. For $16 billion, the world's biggest retailer will take a controlling 77% stake in Flipkart, the leading e-commerce business in India.

The price tag seemed to give some investors sticker shock as Walmart shares traded down as much as 4.4% on the news, even though the deal had long been anticipated. It may seem like a steep price for an unprofitable e-commerce company, but Walmart has repeatedly signaled its strategy of redirecting investments to growth markets with moves like its 2016 pick up of Jet.com and the recent sale of its U.K. subsidiary, Asda, to rival Sainsbury's.

Flipkart is now a key component of that growth strategy, but the Indian company is far from a household name in the United States. Here's everything you need to know about Walmart's new prize, and why the retailer was willing to cough up $16 billion to take control of it. 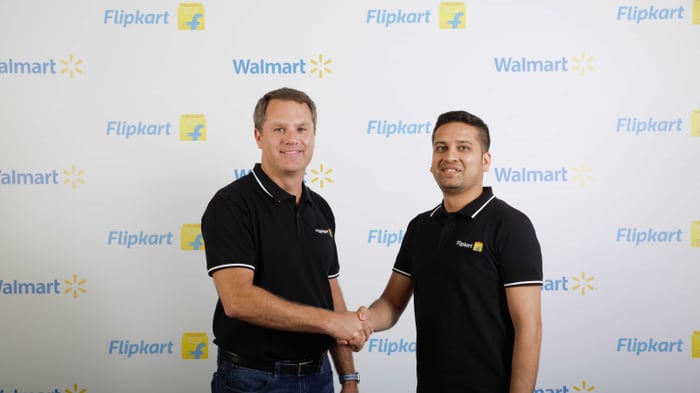 Flipkart was founded in 2007 by Sachin Bansal and Binny Bansal (no relation), who met as computer science students at the Indian Institute of Technology in Delhi. Sachin started working at Amazon.com (AMZN -0.54%) as a software engineer in 2006 and brought Binny on, but the two soon left, recognizing the opportunity in e-commerce, which was in its infancy at the time, in India.

Starting the company in 2007 gave the pair a five-year head start against Amazon, which didn't begin its e-commerce operations in India until 2012.  Like Amazon, Flipkart began by selling books online, and the co-founders even made deliveries themselves in the early days, taking on all aspects of the business, much like JD.com founder and CEO Richard Liu.

The company grew organically and by making acquisitions. Over the course of a decade, Flipkart took over the following companies:

It's easy to see that Flipkart has followed in Amazon's footsteps in more ways than one. Not only did the company have similar beginnings as a book seller, but it has grown by swallowing up smaller online retailers and tapped into the power of movies. While e-commerce is Flipkart's main business, it also generates revenue through payments, shipping and logistics services, and advertising, much like Amazon.

Over time, Flipkart became one of the most sought-after investments by private equity firms and other big investors, attracting funding from the likes of Softbank, Tiger Global, and Tencent, which pumped up the company's value to more than $20 billion following the Walmart deal.

Since January 2017, the company has been run by Kalyan Krishnamurthy, who came in at a time when Flipkart's valuation was dropping. He reenergized the valuation by firing senior managers, spending on more promotions in order to deliver faster growth, and focusing on holiday-season shopping.  Walmart's purchase of the company would indicate that those efforts clearly paid off.

It's no secret why Walmart bought Flipkart: growth, growth, and growth. Walmart said that Flipkart, which operates both as a marketplace and as a direct seller, generated $7.5 billion in gross merchandise volume (i.e. the total value of products sold on its platform), and $4.6 billion in revenue over the past year. It also said its growth rate in both categories was more than 50%.  For the fiscal year that ended in March 2017, Flipkart reported a 29% increase in revenue to $3.09 billion, but its bottom-line loss widened 68% to $1.3 billion.

Meanwhile with a GDP growth rate around 7%, the Indian economy is expected to grow rapidly over the coming years. India is projected to replace China as the world's most populous country by 2024, and India will be the second-biggest economy, ahead of the U.S. but behind China, by 2040, according to PriceWaterhouseCoopers.

Walmart highlighted these growth prospects in its conference call and noted that the Indian retail market is expected to reach $1.3 trillion at some point over the next five years, compared to $5.08 trillion last year in the U.S., and it predicts India will be a top-five e-commerce market in the same span of time. From 2004 to 2012, the Indian middle class doubled in population from 300 million to 600 million.

Walmart, which plans to inject $2 billion into Flipkart to help expand operations and speed up growth, isn't the only one eyeing the opportunity in the Indian market, of course. Amazon has already pledged to invest $5 billion into India and also made an offer to buy Flipkart.

Walmart may have paid a steep price for Flipkart -- at a price-to-sales multiple of 4.5, it's similarly priced to Amazon at 4.4, but lacks the billions in profits of its rival. What Walmart gains from the move, however, is a unique asset in the world: the leader of e-commerce, the fastest-growing segment in retail, in one of the world's biggest growth economies.

The company has learned from experience that it's often better off partnering with native companies abroad. After struggling to grow in China, it sold its Yihaodian website to JD.com for a 5% stake in China's No. 2 e-commerce company. In Japan, Walmart made a strategic alliance with Rakuten to partner on grocery delivery, e-books, and audiobooks. The decision to sell Asda to Sainsbury's seemed to be motivated by similar logic.

Prior to the day's announcement, Walmart's presence in India was almost non-existent, as it owned just 21 wholesale stores in a partnership with local telecom Bharti. That deal was supposed to help open the Indian market to Walmart, but it's been repeatedly confronted by red tape because India blocks foreign-owned retailers from operating in the country without a Indian partner. Those regulations don't apply to e-commerce, however, which gives the company an opening with Flipkart, and with co-investors including Microsoft, Tencent, Tiger Global and potentially Alphabet, Walmart seems to be putting together a corporate dream team to penetrate a market expected to be worth $200 billion by 2026.

As Walmart CEO Doug McMillon said, "India is one of the most attractive retail markets in the world, given its size and growth rate, and our investment is an opportunity to partner with the company that is leading transformation of eCommerce in the market."  Buying Flipkart may not help Walmart's bottom line anytime soon, but it was a smart move to take advantage of the unique opportunity. If the company can stay ahead of Amazon in the Indian e-commerce market, the deal will surely pay off down the road.