Please ensure Javascript is enabled for purposes of website accessibility
Log In Help Join The Motley Fool
Free Article Join Over 1 Million Premium Members And Get More In-Depth Stock Guidance and Research
By Jeremy Bowman - May 11, 2018 at 7:16AM

Shares of the DIY soda maker slipped after the recent earnings report, but the company is looking stronger than ever.

There's a stock that's returned more than 500% over the last two years, yet it's only covered by four Wall Street analysts. Its dramatic comeback has also been widely ignored by the financial media, despite its stunning growth.

I'm talking about SodaStream International (SODA), of course, the Israeli do-it-yourself sparkling water specialist. Shares of SodaStream sold off following the earnings report on Wednesday even though the company once again beat earnings and revenue estimates. Below were the key figures from the first-quarter report.

Other positive signs included a 250-basis-point improvement in gross margin from 52.7% to 55.2%; revenue growth of 22% or better in its three biggest regions, which make up 95% of total revenue; and growth in all three of its product segments (starter kits, flavor, and CO2 cartridges). Growth in flavors after several quarters of declines in the category was particularly promising as it shows that new products like fruit drops and essences are resonating.

Guidance was also strong as the company boosted its full-year revenue growth forecast from 12% to 15%, and it sees operating income up 15% from a previous range of 10%. It also expects EPS to grow 8% compared to a previous projection of 5%.

Beyond those numbers, there are several other reasons to believe SodaStream has more room to grow. 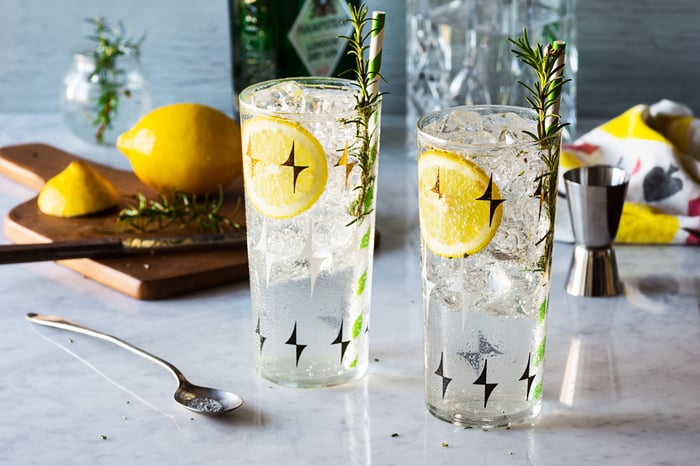 The chart below shows how the company's quarter earnings compared to the analyst consensus.

As you can see from the chart above, SodaStream has regularly soared past analyst expectations. While the extent of its earnings beats has narrowed in recent quarters as its earnings have grown, the company is still consistently beating expectations. Whether that's because management gives conservative guidance or the results are exceeding them is unclear, but that pattern should continue as the company is executing on all of its strategic objectives. Notably, the first quarter of the year is historically its weakest so investors should anticipate EPS to ramp up over the rest of the year.

SodaStream's model of selling starter kits close to cost and then making profits off its consumables like CO2 refills and flavors is one of the strongest models in business. Often known as the razor/blade or the printer/ink model, this kind of business strategy works well because it locks in consumers to the brand, as long as they like the product, as they are unlikely to switch to a competitor once they've made the initial investment in the starter kit. The biggest advantage of the razor/blade model is that profit margin should expand as a company grows and more of its revenue will come from higher-margin consumables. Since 2015, its operating margin has increased from low single digits to 15%, and it should keep expanding.

SodaStream's initial attempt at this strategy fell flat when the company was predominantly a soda brand since soda consumption is declining in the U.S. and much of the world, and its product was not competitive on a pricing basis with that of beverage giants like Coca-Cola and PepsiCo.

The company appears to have solved that problem by remaking itself as a sparkling water brand. Not only does that make the product more attractive from a pricing perspective as it's competing with more expensive bottled waters, but the company is now benefiting from tailwinds in consumer trends as more consumers are drinking bottled and sparkling water in part because of its perceived health benefits compared to soda. Shares of National Beverage (FIZZ 4.33%) have soared recently on the strength of LaCroix, the flavored sparkling water brand that has developed a following among millennials. In the U.S., sparkling water sales were expected to grow by more than a third last year and from 2011 to 2017 sales of the fizzy water.

With that trend behind SodaStream, it's not surprising to see the stock soaring -- it's still up 23% year to date even with the post-earnings sell-off, and at a P/E of 24.7, the stock still looks cheap based on its momentum and the strength of the company's model.

Perhaps the soda maker's shares were due for a breather, but Wall Street's mistaken if it thinks SodaStream's gone flat.