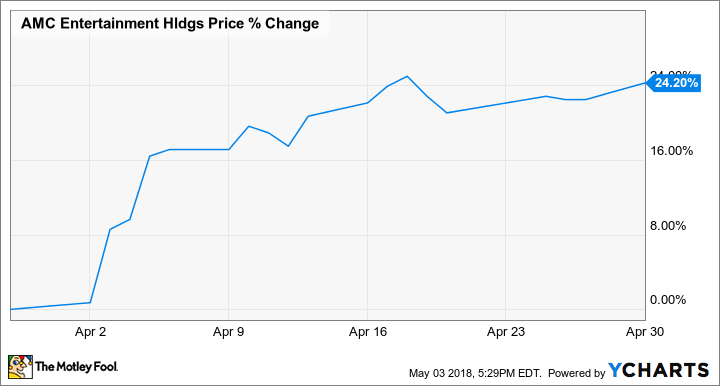 The theater chain saw its share price climb following the announcement that it would be opening its first theater chains in Saudi Arabia. Indications of progress on a potential spinoff of AMC's United-Kingdom-based subsidiary Odeon also factored into last month's gains. 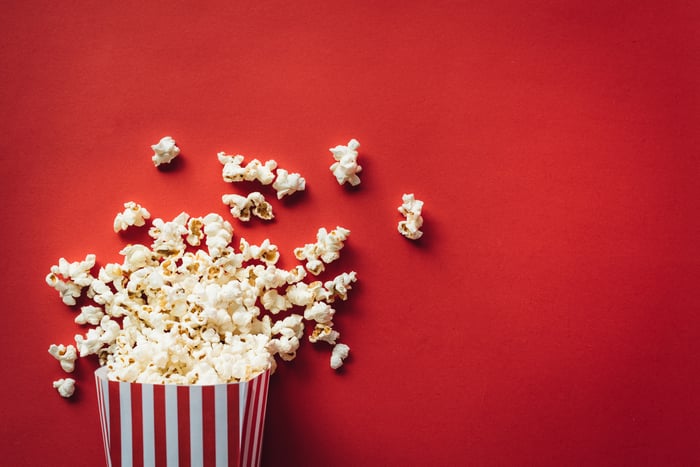 April 4 was a big news day for AMC. Rumblings increased about the company's potential deal to partner with Citigroup to spin off the Odeon theater chain. Reports suggest that AMC would look to value Odeon at roughly $2 billion in a potential initial public offering -- that's a favorable valuation given that AMC purchased Odeon in 2016 at a $1.2 billion price.

April 4 also saw developments on the international-expansion and ticket-bundling-service fronts. AMC announced its official entry into the Saudi Arabian market after the country announced it would lift its 35-year ban on public cinemas. A group of AMC theater listings were also added back to the MoviePass app on the day. MoviePass's parent company, Helios and Matheson, had opted to remove the listings on the app for AMC's 10 most-trafficked locations while the two companies were negotiating.

AMC shares have given up some of their April gains, trading down roughly 6% in May so far. The company reported first-quarter earnings on May 7, recording $0.14 earnings per share on sales of $1.38 billion. That was significantly better than the average analyst estimate, which had called for earnings per share of $0.09 on $1.35 billion. However, shares have actually lost ground following the release.

Looking further out, the company's CEO, Adam Aron, has given a rosy forecast for box-office performance across the remainder of the year -- stating that he expects to see a pronounced rebound for the theater business and a big earnings jump for the year. With Avengers off to a huge start, and new entries in the Jurassic World and Star Wars yet to debut, 2018 does have the potential to be a big sales year. The long-term viability of the theater model is currently under scrutiny, and looking at box-office performance in a strong release year could provide signs of how the industry will fair over the next several years.