But in practice, small-cap investing can be fraught with risks, too. Smaller companies don't have the resources that bigger ones do, and they can be crushed if they go head to head. Smaller-cap companies that are considered "hot stocks" often have pricey valuations as well.

The stock I'm introducing this month -- and buying for my own portfolio -- is no exception: It trades for over 100 times earnings and 100 times free cash flow. 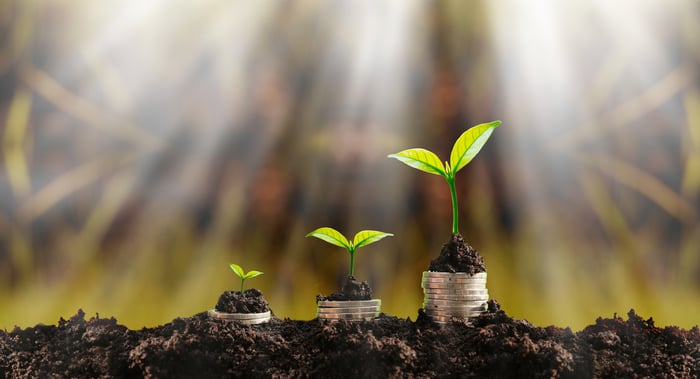 And yet, I think investors looking to allocate money to smaller companies should consider putting their own cash behind AppFolio (NASDAQ:APPF). When Motley Fool trading rules allow, I'll be doing just that. Here's why.

The mission is crucial

Klaus Schauser and Jonathan Walker had been running in the same Santa Barabara technology circles for years when they sat down to talk in 2007. When they did, they discovered they shared a belief: Consumers were making the switch to the cloud faster than businesses.

GMail, Hotmail, and the like were early versions of the cloud: You could send yourself an email with an attachment from one computer and download it to another without the need for a storage device. It was only a matter of time, these two thought, before businesses would start catching on. And when they did, smaller companies would be at a disadvantage: They wouldn't have resources that were even nearly sufficient to build their own cloud systems in-house.

Thus AppFolio was born, with a mission "to revolutionize vertical industry businesses by providing great software and service."  In plain English, this means that AppFolio will make cloud solutions for small and medium sized businesses in whatever industries need them, and where the company can reasonably expect to profitably meet those needs.

That type of optionality -- or the ability to expand the business' future over time -- is the linchpin of my investment. While the company started by offering solutions for the property management industry in 2008, it expanded to include small law firms with the 2012 acquisition of MyCase. Ten years from now, I expect the list to be even longer.

Of course, such an approach would mean very little if management hadn't been able to prove that it could execute on this mission. But since 2013, results have been very impressive for this software-as-a-service (SaaS) company. 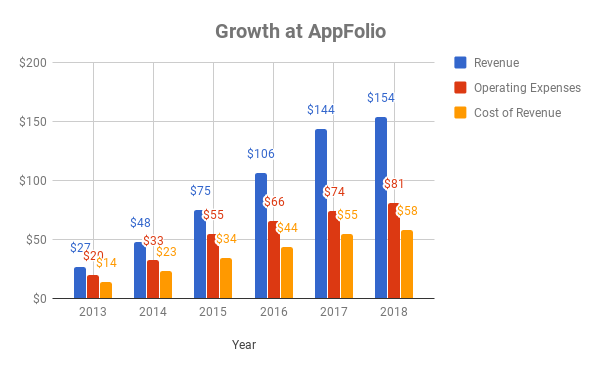 Data source: SEC filings. Cost of revenue and operating expenses do not include stock-based compensation. All figures in millions, rounded to nearest million. 2018 figures are for trailing twelve months as of March 31, 2018.

It's important to note that those 2018 figures are just for one quarter thus far. And if the three bars seem confusing, there are two powerful trends worth noting:

AppFolio has been able to accomplish this impressive growth by growing its client list and expanding relationships with those clients over time.

On the client roster front, this growth is easily demonstrated.

As before, the 2018 figures only include the first quarter of the year. Clearly, clients are signing on in droves.

But that's not all: They are also using more services as time goes on. AppFolio starts clients off with "Core Solutions," and then expands that relationship to include "Value+" services. Here's what that looks like for property management companies, to use one example:

Over time, the Value+ services have contributed more and more to the company's top line. 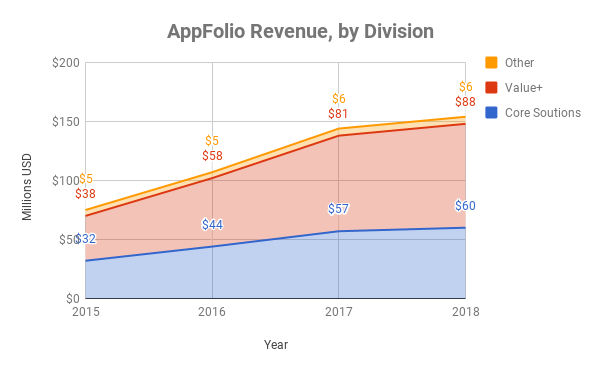 Image source: SEC filings. All figures in millions, rounded to the nearest million. 2018 figures are for trailing twelve months as of March 31, 2018.

This is crucial: as more and more companies use more and more of AppFolio's services, the software becomes embedded deeper and deeper within their DNA. That makes switching costs very high. Think about it: Who would want to manage the cost or headaches involved with migrating all of the data on AppFolio's platform to a different one, retrain all of their employees, and risk losing mission-critical data?

That's why the company's dollar-based net expansion (DBNE) rate -- a measure that takes into account both churn rates out of AppFolio's solutions and existing customers adding more services over time -- have been very high.

Customers are clearly sticking with AppFolio, and using them more over time.

What I plan to do

When Motley Fool trading rules allow, I will be purchasing a starter position in the company. While revenue growth and profitability are important, the two key factors I'll be watching are the company's DBNE and its moves to expand into ever more verticals -- or industries.

Both Schauser and Walker are still on board as the Chief Strategiest and Cheif Technology Officer, respectively. Combined, they control over 30% of the company's voting rights. They have also shown, with their careful forays into property management and law, an ability to prudently evaluate the cloud needs of different industries. With $68 million in cash on hand, no debt, and trailing free cash flows of nearly $16 million, I believe AppFolio has what it takes to be a long-term compounding machine in my portfolio.