Please ensure Javascript is enabled for purposes of website accessibility
Log In Help Join The Motley Fool
Free Article Join Over 1 Million Premium Members And Get More In-Depth Stock Guidance and Research
By Sean Williams - May 12, 2018 at 8:41AM

The marijuana industry is growing by leaps and bounds in North America. Cannabis research firm ArcView, in partnership with BDS Analytics, found that legal pot sales soared 33% in 2017 to $9.7 billion. A decade from now, ArcView sees North American sales topping an estimated $47 billion.

This impressive growth is due to a combination of state- and country-level expansion, as well as a general shift in the way people perceive cannabis.

Regarding the former, Mexico legalized medical marijuana in June 2017, 29 U.S. states have legalized cannabis in some capacity since 1996, and Canada appears to be on the verge of passing the Cannabis Act, which would make it the first developed country in the world to have legalized adult-use marijuana. As expansion continues, sales for growers and ancillary pot industry businesses are expected to soar. 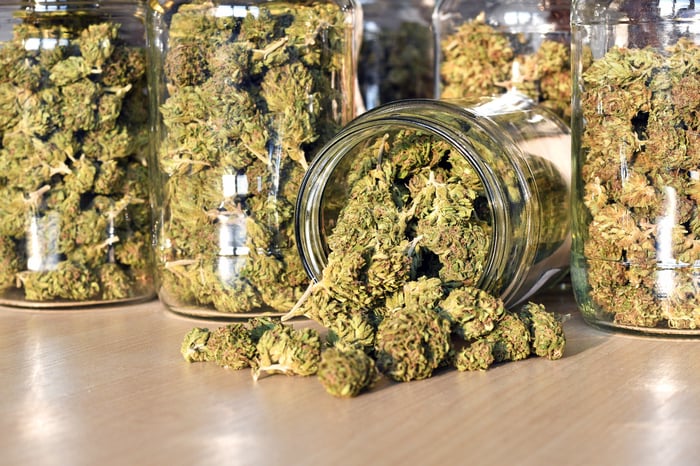 Meanwhile, national pollster Gallup found that nearly two-thirds of the American public favored the idea of legalizing marijuana in its October 2017 survey. That's up from just 25% in 1995, the year before California became the first state to legalize medical cannabis for compassionate-use patients.

Cannabis is stuck in the mud in the U.S.

But despite this growth and the apparent shift in the public's opinion, marijuana remains a Schedule I drug at the federal level in the United States. As a Schedule I substance, cannabis is wholly illegal, considered to be highly prone to abuse, and has no recognized medical benefits.

This classification also comes with some pretty serious disadvantages for marijuana businesses operating in one of the 29 states that have legalized the drug in some capacity. For instance, pot-based businesses usually have little or no access to basic banking services. This is because financial institutions fear the monetary or legal repercussions of aiding a business that sells a federally illegal substance.

Also, should marijuana companies be profitable, U.S. tax code 280E disallows them the ability to take normal corporate income-tax deductions. This can lead to an effective tax rate of as high as 90%!

Make no mistake about it, the U.S. Drug Enforcement Agency (DEA) had its opportunity to reschedule or deschedule cannabis in the summer of 2016 after two petitions worked their way up the ranks, but the drug-regulatory agency chose to stand pat on its policy. The DEA wound up citing insufficient benefit data from clinical trials, and the fear of abuse, as reasons to keep marijuana listed next to heroin and LSD. 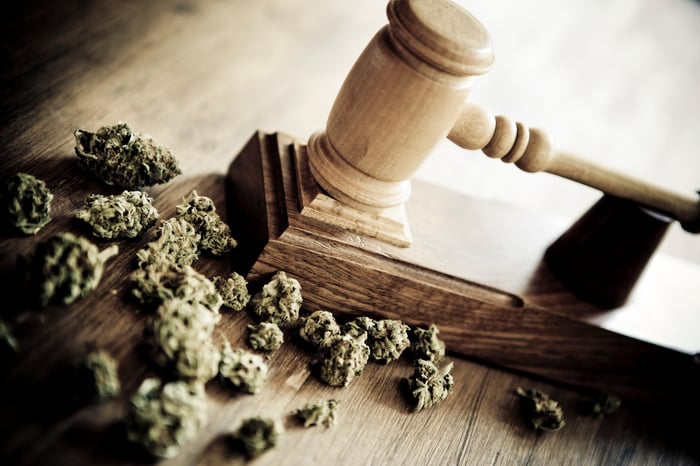 Here's what the head of the DEA just said about marijuana

If marijuana is still be decriminalized at the federal level, change is going to have to come either from lawmakers or the DEA.

This past week, DEA Acting Administrator Robert Patterson answered a barrage of questions regarding the opioid epidemic in America from the House Judiciary Committee. For those unaware, opioids are claiming approximately 115 lives a day in the U.S. as a result of overdose-related deaths. In numerous instances, these questions were pivoted to discussions about marijuana, which is viewed by some folks as a solution to lessen the severity of the opioid crisis. Here are the four most notable things Patterson had to say about cannabis when questioned by lawmakers, courtesy of Marijuana Moment.

"The reason why it remains in Schedule I is the science."

This comment from Patterson, in response to a line of questioning from Rep. Steve Cohen (D-Tenn.), reinforces the agency's stance that it took nearly two years ago in keeping cannabis wholly illegal. Though the DEA head did suggest that he and the agency are all for additional clinical trials and research being run with regard to medical marijuana, efforts to do so have been bogged down by the U.S. Justice Department.

Despite pledging to increase the number of federally approved grow facilities, the Justice Department, headed by staunch cannabis opponent Jeff Sessions, hasn't approved any of the more than two dozen proposals for new grow sites. Given that there's only one approved federal grow facility in the country -- the University of Mississippi -- it makes gaining access to cannabis to run clinical trials exceptionally challenging. And, without this clinical data, the DEA is unwilling to budge on its Schedule I classification. 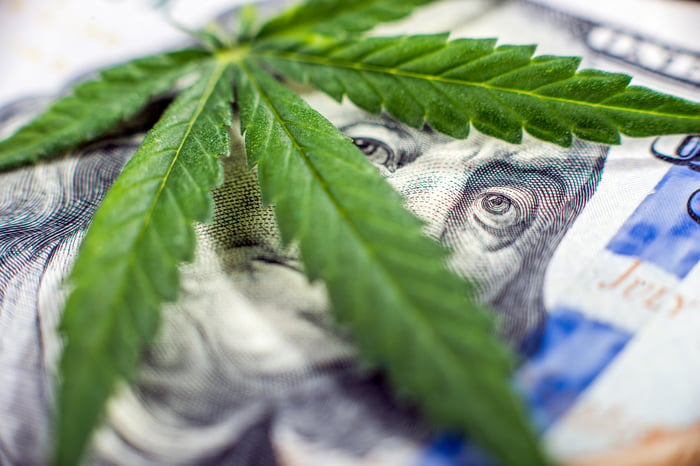 "At what point did we determine that revenue was more important than our kids?"

Also while speaking with Rep. Cohen, Patterson uttered the phrase above. Among skeptics and opponents of expansion, it's a somewhat common belief that dollar signs are driving progressivism in the industry. Considering that a number of states have budgets that are running in the red, and most cannabis tax revenue is being used to fund school and law enforcement budgets, these skeptics would seem to have a point.

Then again, a modest majority of the American public believes that legalizing marijuana in order to boost tax revenue would be a good idea, according to an April 2018 poll from the independent Quinnipiac University. When questioned, 54% of respondents suggested that legalizing marijuana with the purpose of increasing tax revenue in their state would be a good idea, compared to just 42% who disagreed.

Marijuana and opioids are "not comparable."

Interestingly enough, when questioned by Rep. Hank Johnson (D-Ga.), Patterson made quite the important admission. Johnson, in an attempt to elicit a response from the DEA head on the number of deaths brought about annually by cannabis-related overdoses, was able to get Patterson to admit that marijuana and opioids aren't comparable drugs.

According to published data over the past couple of years, there hasn't been a recorded overdose-related death tied to cannabis. Meanwhile, as noted above, roughly 115 Americans are dying daily due to opioid-related overdose deaths. Though the DEA chief isn't exactly saying that cannabis should be used in place of opioids -- in fact, Patterson denied having read a number of recent reports suggesting that cannabis may be an opioid substitute -- he does recognize that the end result of abuse for opioids appears to be much worse relative to cannabis misuse. 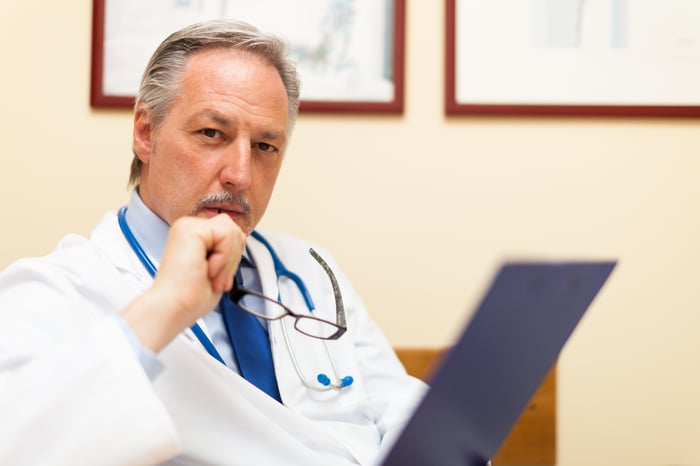 He wouldn't "say [marijuana is] a gateway [drug]."

Finally, for those of you who would prefer to see cannabis legalized nationally, when questioned by Rep. Eric Swalwell (D-Calif.), Patterson did comment that he doesn't view marijuana as a gateway drug. This admission would appear to leave open the possibility for a rescheduling or descheduling at some point in the future.

Furthermore, when Quinnipiac's April 2018 poll asked respondents whether they felt marijuana was a gateway drug, 61% said no. This shows that the DEA head and the American public do actually align on one core cannabis topic.

Of course, the key takeaway remains that change at the federal level is probably a long ways off. The decision to keep cannabis as a Schedule I drug will likely stymie growth in the U.S. market and make U.S.-focused pot stocks dangerous investments.

5 Growth Stocks That Can Deliver Transformational Wealth (With Patience)