Walmart's (NYSE:WMT) tossing its hat into the ring in one of the world's biggest growth markets. The retail giant made its biggest bet ever, taking a 77% stake in Flipkart, the leading e-commerce retailer in India, for a whopping $16 billion.

It was the biggest acquisition in the company's history, and it gives Walmart a promising foothold in an economy that's expected to be the world's second biggest by 2040.

Walmart explained the move, saying, "India is one of the most attractive retail markets in the world, given its size and growth rate, and our investment is an opportunity to partner with the company that is leading transformation of e-commerce in the market."

It's not the only one with its eyes on the Indian prize. Amazon (NASDAQ:AMZN) has already pledged to invest $5 billion into the subcontinent, and by offering rock-bottom prices for Prime at around $15 for an annual membership and stacking Prime Video with ample local content, it's shown that India is a priority.

Beyond Amazon, Chinese e-commerce giant Alibaba (NYSE:BABA) has also built a position in India as the majority owner of Paytm, and local providers like Snapdeal are still in the fight as well. 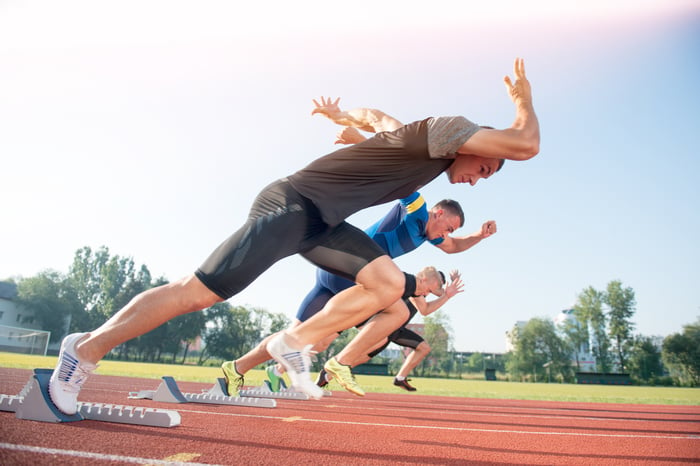 It's no secret why foreign companies are rushing into the Indian e-commerce market. With its billion-plus population and exploding middle class, the Indian online retail market has tremendous growth ahead of it. Only China offers similar potential and brands like Alibaba and JD.com are already dominant there, making it difficult for new entrants. Walmart found it so difficult in China that it sold its e-commerce brand to JD.com in exchange for a 5% stake in the online retailer.

While the e-commerce winners and losers in China and the U.S. have mostly been decided, the playing field in India is much more open. Walmart believes the Indian retail market will be worth $1.3 trillion within five years and touted Flipkart's revenue growth of better than 50% over the last year. It also said India will be a top-five e-commerce market within five years as total e-commerce sales in the country are expected to reach $200 billion by 2026, growing by an annual rate of 29%. Only 14% of India's internet users shop online today, showing that the total addressable market is much larger than what's already been reached.

Most online shopping in India is currently devoted to electronics and apparel with the former claiming 47% share and 31% going to clothing. While Amazon and Flipkart, which also owns popular online fashion shopping sites Myntra and Jabong, are the clear leaders in India, nearly 40% of online shoppers said they had used Snapdeal in the past three months in a recent survey.

Meanwhile, Alibaba has been stepping up its focus on the key growth market, too. In addition to its investments in Paytm, a digital payments network and the operator of the online marketplace Paytm Mall, Alibaba recently took a $146 million stake in BigBasket, an Indian online grocer, becoming its biggest shareholder.

Alibaba seems to be following a similar strategy to the one that's worked so well in China as it ties separate brands into a marketplace like TMall in China or Paytm Mall in India. In this case, Alibaba controls the payment systems and takes a commission on sales. It has also invested in logistics provider XpressBees and food delivery platform Zomato, further enhancing its local ecosystem.

However, Amazon still looks like Walmart and Flipkart's biggest competition. The company is fast expanding as it now has dozens of fulfillment centers in the country and is planning to increase its warehouse space by 50%.  There are now more than 25 million products available on Prime from local third-party sellers and several local TV series available on Prime Video. Amazon doesn't disclose country-level sales results, but a survey from Forrester found that more than 80% of Indian online shoppers had bought something on Amazon in the past three months, more than Flipkart, which has registered just above 60% in that survey for the past three years.

This isn't Walmart's first foray into India. In 2007, it formed a partnership with Bharti, a local telecom provider that has its own retail stores, to open hundreds of stores across the country. For Walmart, the decision was a way around an Indian regulation that blocks foreign companies from opening wholly-owned retail businesses. However, the partnership never fulfilled Walmart's ambitions, and in the midst of bribery allegations, Walmart eventually severed ties with Bharti. Today, it has just 21 wholesale stores in India.

There is no such regulation blocking foreign companies in e-commerce, giving Walmart an entry into the market by taking a majority stake in Flipkart. That acquisition presents Walmart with an opportunity for growth but not a guarantee. After all, the company's results abroad have been checkered. While it's been highly successful in Mexico; further away from home, it's struggled. It exited Germany in 2006, finding its superstore model didn't fit Europe's biggest economy, and it's had difficulty taking on local competitors in Japan and South Korea It essentially backed out of the U.K. by selling its Asda subsidiary to Sainsbury, though it will retain a stake in the combined company, and China has proved a harder market to penetrate than it expected.

Flipkart has a 30% share of the e-commerce market today with strength in apparel and mobile phones, giving Walmart a strong position, but the American giant should also expect years of losses ahead. It's already pledged to invest $2 billion in Flipkart and will have to fend off Amazon which is famous for scorched-earth price wars.

Based on the small sell-off in Walmart stock that followed the announcement, investors are skeptical of the deal and its $16 billion price tag. But if Walmart can make the right moves with Flipkart, this opportunity has the potential to tip the scales for even the world's largest retailer.