So far, 2018 has been a topsy-turvy year for the stock market. A rise early in the year to record highs was followed by a healthy correction from which most major market benchmarks still haven't recovered.

Even with volatility returning to the market, some investors have been fortunate to find the companies that have been able to enjoy success early in the year. In particular, Fossil Group (NASDAQ:FOSL), Axon Enterprise (NASDAQ:AXON), and Enphase Energy (NASDAQ:ENPH) have gained more than 100% so far in 2018, and some investors think they have further to climb. 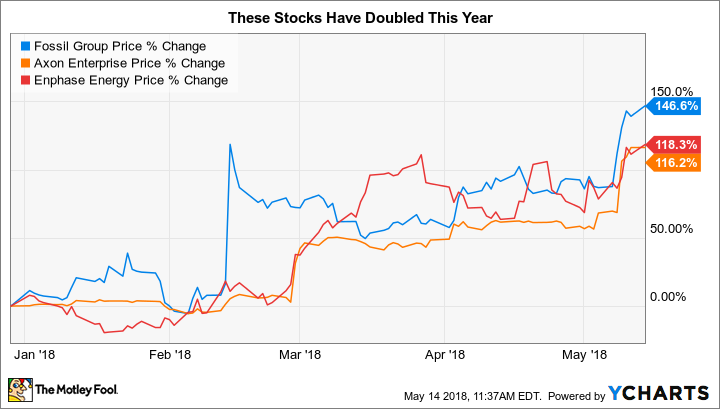 Fossil Group has been the strongest performer of these three stocks, posting gains of almost 150% in the first four and a half months of the year. To be fair, that bounce comes after a long decline that lopped more than 90% of the watchmaker's value off its share price between 2013 and 2017. A long slump in luxury retail and the evolution of the watch industry away from classic timepieces toward technologically advanced machinery threatened to serve Fossil with a double hit from which it could never emerge.

Rather than give up, Fossil decided it would double down on its foray into the wearable segment, with innovations of its own designed to help it preserve and build market share. The company is still seeing sales declines and is losing money, but results are getting incrementally better, and Fossil is starting to generate more positive buzz among those who follow fashion and style. For a brand that's dependent on its reputation, Fossil is getting the good news it needs, and it could mount a longer-term recovery if it can successfully tap into consumer trends by choosing the right product lines to develop in the remainder of the year and beyond. 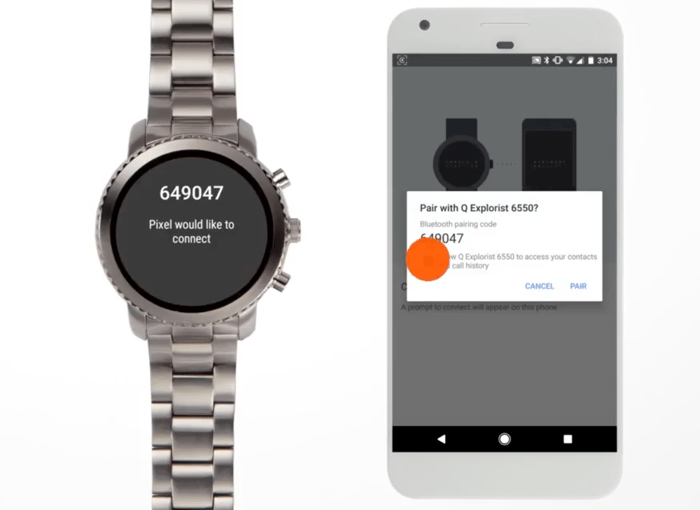 On the other side of the long-term stock-performance spectrum, Axon has been doing well for itself for a long time. Initially, Axon rode the success of its Taser stun guns as a nonlethal alternative to more-deadly weaponry for law enforcement and similar applications. But it has suffered occasional volatility in its share price when various incidents have raised questions about the continued viability of its weaponry as good growth prospects.

How Axon evolved is especially noteworthy. By developing body cameras for police officers and other law enforcement personnel, Axon managed to create a brand-new market that has since become instrumental in providing evidence to respond to allegations of misuse of discretion. Police departments are insisting on having body camera technology available in order to assuage public concerns about institutional practices, and that's sent Axon sales climbing. Combined with moves into cloud storage of imagery and other evidence, and dispatch facilitation software, Axon has a number of avenues for future growth.

Enphase comes out of the shade

Finally, Enphase Energy is up more than 115% since Jan. 1. The maker of micro-inverters for the solar industry is looking to climb back to its former glory, but it still has a long way to go. Shares of Enphase fell from above $15 during 2014 to less than $1 at times last year before bouncing back. Even after the year-to-date gains, Enphase is still two-thirds below where it was just a few short years ago.

Having survived a temporary rough patch for solar, Enphase has worked toward coming out with new products to boost sales. Revenue has climbed higher, and Enphase is getting close to break-even results; profitability could be right around the corner. If prices for crude oil continue to climb, they could provide the incentive to get more people to use solar energy. And the micro-inverter technology, which ensures that individual panels can still generate power even when others nearby are temporarily shaded, looks to be in greater demand than ever.

All three of these stocks are only just entering growth phases that could potentially last a lot longer than just the beginning of 2018. Setbacks are likely along the way, but with favorable long-term prospects, Fossil, Axon, and Enphase all have the ability to post further gains from here if things go well.