Please ensure Javascript is enabled for purposes of website accessibility
Log In Help Join The Motley Fool
Free Article Join Over 1 Million Premium Members And Get More In-Depth Stock Guidance and Research
By Adam Levine-Weinberg - May 14, 2018 at 4:25PM

Following a successful test during the 2016 holiday season, J.C. Penney (JCPN.Q) rolled out toy shops in all of its stores in mid-2017. It launched the shops with products from major brands including Hasbro (HAS 3.23%) and Mattel (MAT 4.40%), and later partnered with Lego to expand its assortment.

This bet on the toy business came at just the right time. The ongoing liquidation of Toys R Us -- and to a lesser extent, the demise of regional department-store operator Bon-Ton Stores -- has created a significant revenue growth opportunity in the toy business for J.C. Penney.

A big business with a gaping hole

Toys generate more than $20 billion in sales in the U.S., and in recent years, Toys R Us has held a substantial share of that business. The company didn't report full-year results for fiscal 2017 due to its bankruptcy filing, but for fiscal 2016, it reported domestic revenue of $7.1 billion, of which about $4.5 billion was toy-related.

Whereas Toys R Us has been able to sell its operations in many international markets, its U.S. stores are liquidating. That's creating a huge opportunity for other retailers (including J.C. Penney) to step in and take its market share. 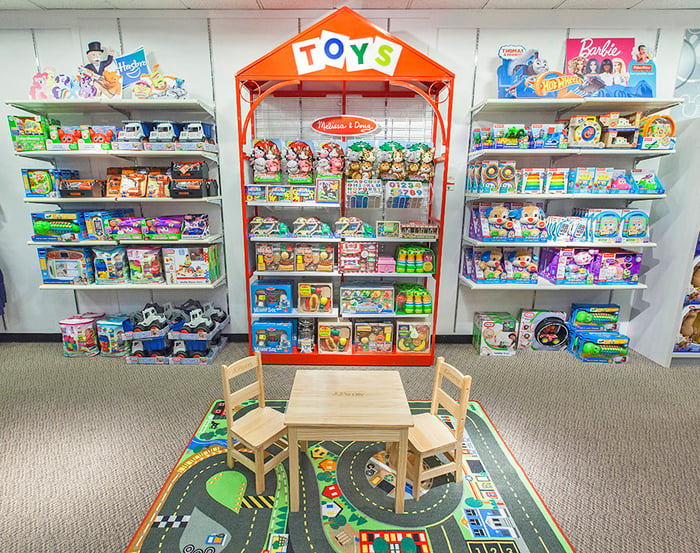 The liquidation of Bon-Ton will also create a modest sales opportunity in toys for J.C. Penney. Last fall, Bon-Ton added FAO Schwarz-branded toy shops in nearly 200 stores as part of a short-lived collaboration with the iconic toy merchant. There is substantial overlap between the Bon-Ton and J.C. Penney store bases, which could help the latter company in its efforts to gain market share.

J.C. Penney will never rival the major discount chains in terms of toy sales. However, with $12 billion of companywide revenue, J.C. Penney doesn't need to win a sizable percentage of the $20 billion toy market to make a meaningful impact on its sales. Capturing just $100 million to $200 million of incremental sales in 2018 would be a nice win, boosting the top line by 1% or more.

A small improvement in sales like this could have a disproportionate impact on J.C. Penney's earnings. In recent years, the company has been running around breakeven, but the margin on incremental sales (particularly in stores) could be 10% or more, because many of the costs of running a store are more or less fixed.

As I have pointed out previously, J.C. Penney already sells more than $1 billion of children's apparel each year. Thus, the company has plenty of active customers with children. It just needs to convince some of them to buy toys at J.C. Penney as well.

One of the biggest challenges in setting up a successful toy retailing business is striking supply deals with the likes of Hasbro, Mattel, Lego, and their smaller rivals. However, the Toys R Us liquidation has removed toy makers' leverage over retailers. For example, Hasbro reported dreadful results last quarter due to the loss of Toys R Us as a customer. Furthermore, while Mattel beat expectations in the first quarter, it has been in a sales slump for years.

Sure enough, toy makers are now eager to find new retail outlets for their products. During J.C. Penney's fourth-quarter earnings call, CEO Marvin Ellison noted that an increasing number of toy suppliers were looking to put their products in JCPenney stores -- and that was even before Toys R Us and Bon-Ton had decided to liquidate.

In each of the JCPenney stores I have visited this month, there have been signs highlighting some of these new products in the toy shops. Furthermore, one of the stores appeared to have an expanded toy department, with more floor space and a broader selection of items. J.C. Penney launched the toy shops in its stores around the middle of 2017. Thus, during the first half of 2018, any sales the retailer gets in its toy sections will be pure upside relative to the prior-year period.

Nevertheless, toys are likely to become a bigger growth driver during the second half of 2018. The liquidation of Toys R Us -- and to a lesser extent, store closures by other retailers with toy sections, including Bon-Ton and Kmart -- means that there are a lot of discounted toys available right now.

But this competition will be gone by the second half of the year. That will give J.C. Penney a fabulous opportunity to drive sales growth in its toy departments, particularly during the holiday season.

J.C. Penney Reveals Which 138 Stores Will Be Closing Soon

3 Stocks I Would Avoid at All Costs