Williams Companies (NYSE:WMB) was off to a great start in 2018 thanks to the growth of its majority-owned master limited partnership, Williams Partners (NYSE: WPZ). There's plenty more where that came from, which was clear from the comments of CEO Alan Armstrong on the accompanying quarterly conference call. While he didn't fill in every detail about what lies ahead, he made sure investors knew that the company's future looks bright.

1. Our growth engine is just getting revved up

Armstrong started off the call by saying that "the quarter was right on plan." Because of that, Williams "continue[s] to remain on course and anticipate[s] significant growth as we look toward the second half of this year and into 2019." One of the drivers of that view is the upcoming completion of its Atlantic Sunrise expansion project. The CEO noted that it would provide "about $105 million per quarter of incremental revenue" for its key Transco Pipeline and would be a "significant contributor to the growth we anticipate in the latter half of this year." 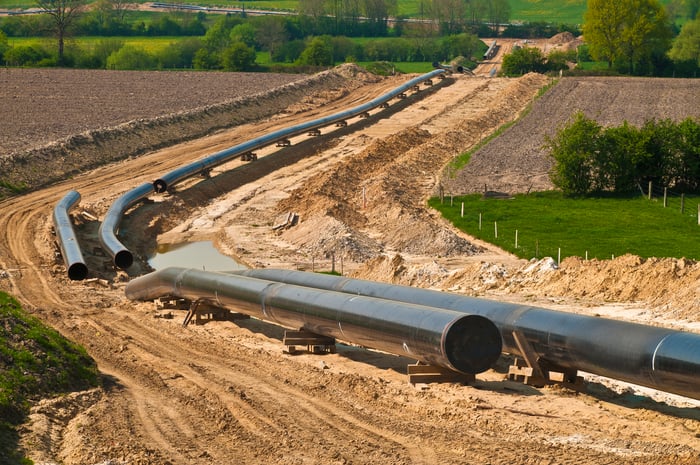 One thing Armstrong made clear is that Williams isn't growing to build an energy infrastructure empire. Instead, the company has put together a "strategy of focusing on connecting low-cost natural gas supplies to the fastest-growing demand centers," which has "allowed the organization to leverage our solid foundation of advantaged positions." According to the CEO, "We are most excited about what our intense focus on strategy will produce for us in the long term. This focus has allowed us to continue to identify, develop, and contract for new opportunities at higher than industry average returns, and this is going to drive improvement in ROCE (return on capital employed) and shareholder value for many years to come."

In other words, by focusing on what it does best, William's growth strategy is earning it higher returns on new projects, which is on pace to create significant value for investors going forward.

3. Stay tuned; we have a lot more projects coming down the pipeline

Williams Partners is putting the final touches on its current expansion phase, which should drive healthy earnings growth through 2019. In fact, it believes these high-return projects will provide it with the cash flow to increase its distribution to investors at a 5% to 7% annual rate through at least the next year, fueling 10% to 15% dividend growth at Williams.

Armstrong hinted on the call that the company has plenty of growth still up ahead. However, he wanted to wait until the upcoming Analyst Day in mid-May to unveil those projects. The CEO did say that the company has an "extensive list of attractive projects spanning our operating areas that are currently in execution or under development." Because of that, Williams will have "great transparency toward predictable growth not just in the short term, but very much in the long term" and is "really excited to see the way our pipeline for growth is continuing to fill in."

4. We're leaving all our options on the table

Another thing Williams Companies' CEO isn't yet ready to reveal is what the company plans to do with its majority-owned MLP. Several analysts on the call asked if the company planned to join a growing number of its peers by rolling up the MLP back into Williams. That's something Williams attempted to do a few years ago, but it abandoned the pursuit after agreeing to an ill-fated merger with Energy Transfer Equity.

While acquiring the rest of the units of Williams Partners it doesn't already own is still an option going forward, Armstrong stated on the call that "there certainly are many other structures to look at." He emphasized that the company isn't in any hurry to decide what it might do, saying, "We're not going to pin ourselves down as to when exactly we're going to answer this question at this point." While this uncertainty could weigh on the company's valuation in the near term, Williams wants to make sure it has evaluated every option so that it can choose the best one, even if that means keeping the status quo.

An income stock for the long term

The overarching theme of Armstrong's comments on the call is that Williams Companies has significant growth ahead of it. While he was a bit light on some details, he did hint that the company has a boatload of new projects in development and could eventually make a structural change with Williams Partners. As the company provides those details, they should further cement the fact that Williams Companies can increase its 5%-yielding dividend at a healthy pace for years to come, which is what makes it a solid stock for income seekers to hold.