Please ensure Javascript is enabled for purposes of website accessibility
Log In Help Join The Motley Fool
Free Article Join Over 1 Million Premium Members And Get More In-Depth Stock Guidance and Research
By Rich Smith – Updated May 16, 2018 at 12:24PM

Macquarie vs. Guggenheim: Which banker should you believe?

Particularly strong in hotel and destination reviews, TripAdvisor remains the most popular travel-related website in the United States by search traffic, scoring an average of 35 million site visits per month last year. But you wouldn't know it from the stock price.

From a high north of $110 four years ago, TripAdvisor shares have taken a trip off a cliff, losing more than half their value over the last four years, and recently falling as low as $38 (before last week's bounce). This morning, they may fall more -- or rise -- depending on how investors react to two new ratings from Wall Street.

First, online travel agencies (OTAs) in general have begun focusing on beefing up their profit margins at the expense of maximizing sales of hotel rooms, period. This is depressing the cost per click (CPC) that TripAdvisor can charge for ads placed on its website, could hurt its revenue, and thus threatens to hurt the company's growth rate. 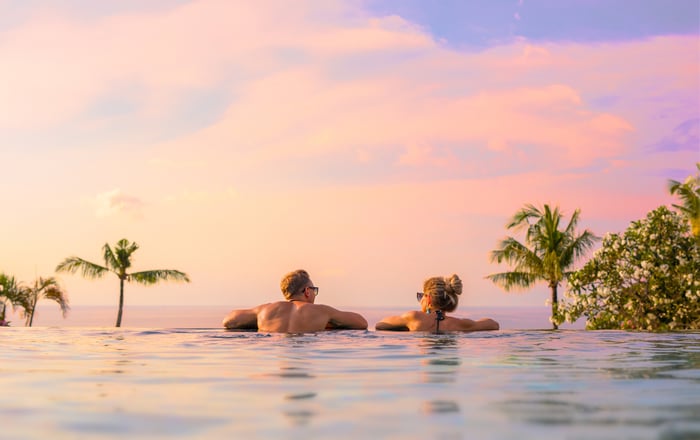 Second, TripAdvisor in particular is trying to improve its profit margins by cutting spending on its own advertising -- but at the same time as its rivals are spending more. Meanwhile, Google (the Alphabet subsidiary) is angling to capture more of the travel review business, further pressuring TripAdvisor in the process.

Third, TripAdvisor stock that suffered in reaction to the above trends has already rallied 25% over the past week, with the result being that the shares now look expensive to Guggenheim. The analyst calls TripAdvisor's valuation (now 4.2 times trailing sales) "aggressive," especially in light of the company's lack of profits and "no history of growth."

Now here's the counterpoint: At the same time as Guggenheim was downgrading TripAdvisor, Australian banker Macquarie was upgrading the stock -- to outperform.

Admitting that competition from Google and spending cuts by OTAs will challenge TripAdvisor, Macquarie nonetheless likes TripAdvisor's decision to lower advertising spending to maintain its profit margins, and believes we could see costs cut "materially," boosting profits over the next two quarters. In fact, Macquarie predicts 2018 will see TripAdvisor grow its profit margins for the first time since 2011, according to a write-up on TheFly.com.

Based on this, Macquarie is predicting that TripAdvisor will report earnings before interest, taxes, depreciation, and amortization of $408 million this year -- up more than 20% from last year -- and $466 million in 2019 (or 14% growth).

The analyst has therefore reversed its earlier underperform rating to outperform, and nearly doubled its price target on TripAdvisor stock to $60 a share.

So who's right in this debate -- Guggenheim the bear, or Macquarie the bull? Let's take a quick look at what TripAdvisor itself had to say in its earnings report last week.

Reporting Q1 earnings last Tuesday, TripAdvisor noted that its quarterly sales grew 2%, hurt largely by a decline in hotel ad revenue. Its profits declined 56%, to $0.04 per share. While objectively unimpressive, TripAdvisor Chief Financial Officer Ernst Teunissen said these results were still "tracking well" with what the company had planned to accomplish, and TripAdvisor is actually feeling "more positive about our 2018 profitability outlook."

Management did not, however, say what that "profitability outlook" is exactly. Rather, it expressed only a vague hope that TripAdvisor will "deliver year-over-year consolidated adjusted [earnings] growth in 2018," and said it's feeling "incrementally positive about our revenue prospects."

While vague, that guidance doesn't seem to tally particularly well with what most of Wall Street is hoping TripAdvisor will produce this year, though: GAAP profits (not mere pro forma) of $0.52 per share and revenue growth of 5%, according to data from S&P Global Market Intelligence.

Meanwhile, TripAdvisor stock is selling for the aforementioned 4.2 times trailing sales and more than 30 times trailing free cash flow. With analysts on average predicting the company will grow profits at only about 12% annually over the next five years, I'd be very leery of following Macquarie's advice and buying TripAdvisor stock after last week's run-up. Guggenheim's advice to sell the stock seems the safer call to me.