Let's take a closer look at the earnings, and at what the company anticipates for the rest of the year. 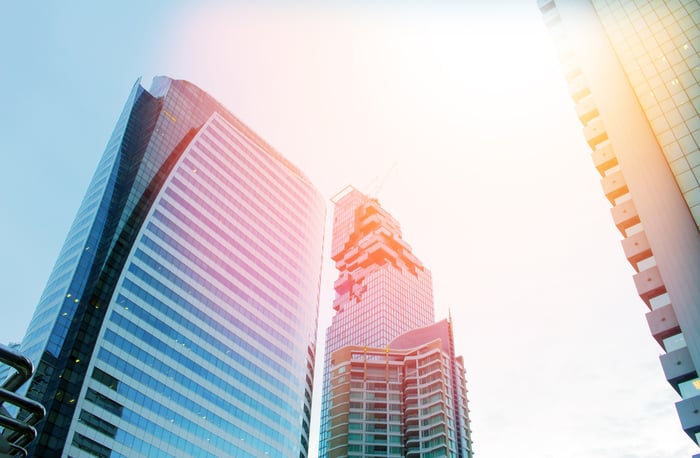 To see just how the company achieved the increase in earnings, it's a good idea to break out EBITDA by business segment. The company has two broad revenue streams: The first is real estate services (RES), which provides commercial property services including leasing, capital-market services, and property management; the second is LaSalle Investment Management, which does real estate investment. As you can see below, the big contributors in the quarter were Americas RES and LaSalle.

Details of the quarter

Americas RES growth was driven by property and facility management, mainly due to a contract win in late 2017 and a "large client contract expansion," according to CFO Christie Kelly on the earnings call. Adjusted EBITDA margin expanded 110 basis points (100 basis points equals 1%) to 10.9% on a fee-revenue basis.

It's worth noting two points about the margin performance:

The company has been investing heavily in technology and digital initiatives, in order to provide differentiated offerings and grow more than the market, and this has been holding back margin growth. On the other hand, Americas RES margin is likely to be negatively impacted by expenses which did not occur in the first quarter. In other words, it's not clear that the segment's margin expansion will continue in the same fashion.

Turning to the EMEA RES region: Don't worry too much about the EBITDA loss, which is down because of "quarterly seasonality," according to Kelly. In fact, it was a relatively good quarter, with margin expansion partly a result of more than 30% growth in capital markets and in property and development services.

While the Asia Pacific RES region isn't hugely important to Jones Lang LaSalle, it was still slightly disappointing to hear management talking about a slow start to the year.

On the other hand, LaSalle Investment Management had a strong quarter, largely due to higher incentive fees and valuation increases in equity earnings. Meanwhile, LaSalle's assets under management increased 2% to $59 billion, compared to $58.1 billion at the end of 2017.

Discussing the outlook for the rest of 2018, CEO Christian Ulbrich talked about "incredibly strong" capital markets in Europe while Asia is "also very healthy," but he was less certain about the U.S.: "[I]n the U.S., we have to see how now the second quarter and the third quarter are playing out. I wouldn't say we see softening yet, but we see small signs of slight hesitation."

Whether this turns into a slowdown in capital market transactions is important, given the company's exposure to the U.S. But it's worth noting that Ulbrich's tone is less positive than it was three months ago.

As Ulbrich noted, global growth in GDP (gross domestic product) will likely rise to 3.9% in 2018, compared to 3.7% in 2017, so growth conditions remain favorable for commercial real estate. Meanwhile, Jones Lang LaSalle will look to take advantage of its investments in digital technology to ensure new contract wins. Talk of "hesitation" in U.S. capital markets is obviously a concern, but otherwise, the company looks well set for 2018.