Digital advertising company The Trade Desk (NASDAQ:TTD) was the darling of the recent earnings season -- the stock jumped some 40% immediately after the company provided its quarterly update. What caused such an impressive surge? In the first quarter, "nearly everything went right," according to CEO Jeff Green, and I would agree.

Revenue increased an impressive 61% to $85.7 million, beating analyst expectations by a huge $12.5 million, and non-GAAP earnings per share almost doubled to $0.34 per share, beating expectations by a whopping $0.24. The company also raised 2018 revenue and EBITDA guidance to $433 million and $133 million, respectively, up from previous guidance of $403 million and $117 million.

So, what exactly is the company doing right, and is it sustainable? 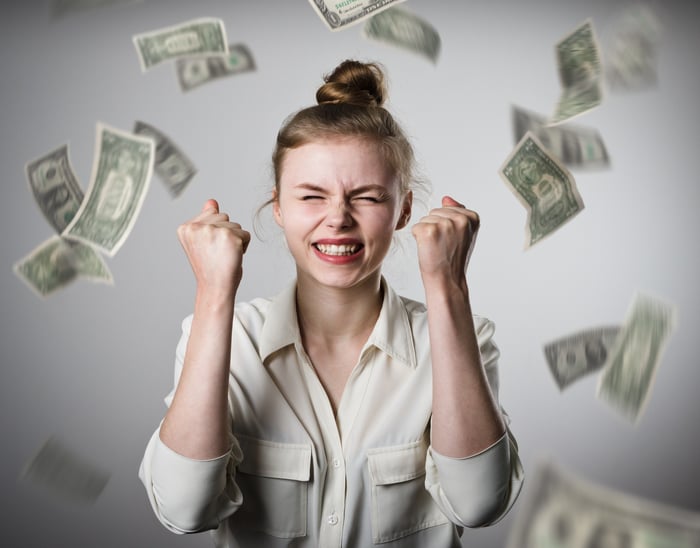 The Trade Desk is benefiting from the big ongoing shift to digital and programmatic advertising. Digital advertising is estimated to grow 18.7% in 2018, according to eMarketer, and programmatic (automated, auction-based buying), where the Trade Desk resides, should grow even faster than that. Trade Desk's mobile channel, one of the company's biggest segments, posted nearly 100% year-over-year growth in customer spend.

Digging deeper, there were several emerging advertising categories where The Trade Desk took advantage of past investments:

Connected television growth was certainly eye-opening, growing over 20-fold from the company's results last year. Obviously, the starting base for the category was small, but the magnitude of the growth was definitely noteworthy.

Connected TV is the term for the app-based over-the-top television platforms such as Roku (NASDAQ:ROKU) and OTT stations like Hulu. That inventory is typically not marketed to advertisers in the same way traditional TV is, with antiquated "Mad Men"-style routines of, "martini lunches or huge parties," as Green puts it. Connected TV thus lends itself to programmatic buying, not unlike other web-based inventory.

That has made the connected TV a hot area recently, as evidenced by The Trade Desk's explosive growth in this segment.

The company noted two huge connected TV customers in Asia, one being Youku Tudou, the video streaming service owned by Alibaba (NYSE:BABA). Another was TVB, a Hong-Kong OTT service, which Green described as, "ABC, NBC, CBS and Roku, all rolled into one network and delivered digitally." In the quarter, international sales grew over 100%, more than double domestic sales.

The Trade Desk has been investing heavily in international markets over the past few years, especially China, where U.S. companies sometimes encounter difficulties. The international segment makes up a small portion of the company's top line, but the recent results show that those aggressive past investments in overseas markets are beginning to pay off.

With seemingly all things going right for the Trade Desk, are there any hidden dangers? One concern might be around data privacy.  Since The Trade Desk uses data to specifically target ads, investors may wonder what impact the recent Facebook (NASDAQ: FB) scandal might have on the company's prospects. As you can see from the recent numbers, the answer was, not much.

On the conference call with analysts, Green was adamant that while the Trade Desk does track users across devices for the benefit of showing relevant ads, it doesn't collect names, emails, phone numbers, social security numbers, or anything that would make customers vulnerable to the type of targeting Cambridge Analytica did with Facebook user data. The use of free services, in exchange for receiving targeted ads -- or "quid pro quo" of the internet, as Green put it -- isn't going to change, and Green adamantly believes there are ways to tighten up privacy without sacrificing that benefit.

The Trade Desk's terrific quarter shows its products and services are taking hold of the advertising world, as long predicted by CEO Jeff Green. If he continues to be correct, and as long as privacy concerns don't overwhelm the industry, the company's future growth potential is still very large, even after this impressive recent run. Investors, enjoy the ride.