These well-known companies will deliver the dividend income you need.

Many conservative investors gravitate toward blue-chip dividend stocks with healthy yields well above what the overall market pays. Right now, the market average of about 2% isn't all that much for income-hungry investors, especially as bond rates start to rise more sharply.

Fortunately, you can find a number of solid investment choices within the Dow Jones Industrials (^DJI) that yield 3% or more. Among them are Chevron (CVX -0.10%), Procter & Gamble (PG 0.97%), and Merck (MRK 1.24%). Each of them faces challenges that could present difficulties in the short run, but they've demonstrated an ability to overcome adversity and produce long-term growth.

An oil giant for income

Chevron has a good reputation for paying dividends. Not only does the oil giant have a yield of 3.6% right now, it's also made annual dividend increases for more than 30 years. The most recent boost came earlier this year, taking the quarterly payout up by 4% to $1.12 per share. 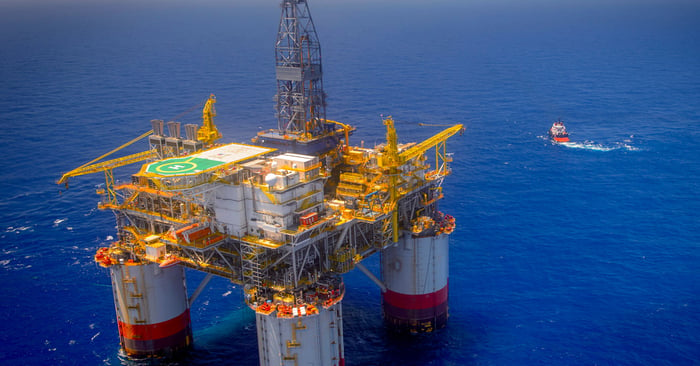 Many oil companies have had to adjust to lower crude prices by finding ways to enhance production rates by adding to their assets. Yet at least so far, Chevron has avoided that strategic direction, instead focusing its efforts on cost reduction and making the most of its current production assets. Chevron isn't giving up on strategic acquisitions and other investments, but anticipated annual spending levels of $18 billion to $20 billion aren't nearly as large as they might seem for a company its size. With the recent rise in oil prices, Chevron's bigger bet on the long-term promise of various shale plays across the U.S. could pay off without nearly as big a shift in its business model. And that could prove to be the best possible outcome for this global oil giant.

One consumer at a time

Dividend investors know that businesses focusing on consumer goods can be cash cows. Procter & Gamble's track record of annual dividend increases is over 60 years long. And its current dividend yield of almost 4% shows that the company behind products like Tide laundry detergent and Pampers diapers isn't skimping on its payouts.

Some investors aren't entirely comfortable with the fact that the pace of P&G's dividend growth has slowed in recent years. After a long period of double-digit-percentage annual increases, boosts since 2015 have been in the 1% to 4% range, culminating with its increase earlier this spring. That reflects some of the difficulties that Procter & Gamble has seen in maintaining the pace of sales growth that it would like, with its fiscal second-quarter results in April having shown only a 1% rise in organic sales. Yet with moves like improved supply-chain logistics, a transformed marketing message, and the search for more promising new products, Procter & Gamble is positioning itself to see its stock do better and reward patient investors for their loyalty.

Finally, Merck is the lowest-yielding stock of this group of three, yet even it manages to post a 3.2% yield from its dividend. The drugmaker has several well-known medications that produce a ton of cash flow. And even though the many clinical trials in its pipeline are expensive, Merck has enough capital to reinvest in its business and still leave plenty behind for dividend payments. Merck hasn't been as reliable as its peers in dividend growth, but for seven straight years now, shareholders have seen rising payouts on an annual basis.

Merck has seen a lot of changes recently in where it gets revenue from its core pharma business. Blockbuster treatments like Januvia and Janumet for diabetes have faced pressure on the pricing front, while cardiovascular drugs Vytorin and Zetia have had to deal with greater competition from generics. Yet Merck has seen some other drugs step up to provide the growth to offset sales declines elsewhere. For example, cancer-fighter Keytruda has been a promising high-growth drug, and Merck hopes to get Food and Drug Administration approval for its use in a wider range of illnesses.

The drugmaker has also made a big boost in research-and-development spending to build out its pipeline of future candidate treatments. All told, Merck isn't shying away from the challenge of reinvesting in its own business, and similar strategies have worked out well in the past.

Get the income you need

Dividend stocks aren't free of risk, but they can provide the income you need as well as opportunities for share-price appreciation. Merck, Procter & Gamble, and Chevron all have the potential to see good total returns for the foreseeable future, and those gains could come sooner rather than later if the companies can execute well on their business opportunities.

3 Industries to Own if the Stock Market Keeps Falling

3 Dividend Stocks You Don't Have to Babysit
395%