Please ensure Javascript is enabled for purposes of website accessibility
Log In Help Join The Motley Fool
Free Article Join Over 1 Million Premium Members And Get More In-Depth Stock Guidance and Research
By Sean Williams - May 18, 2018 at 7:21AM

This is a deal where both sides could actually lose.

In roughly three weeks, the face of the global marijuana industry could change forever. Bill C-45 in Canada, better known as the Cannabis Act, is set for a vote in the Senate on June 7, with the strong likelihood that'll it swiftly be moved along and signed into law not long thereafter. In doing so, Canada will become the first developed country in the world to have legalized recreational marijuana.

Opening the door to adult-use pot is expected to be quite lucrative to the legal cannabis industry. Forecasts are calling for approximately $5 billion in added annual revenue, which comes atop existing medical marijuana sales and export revenue. As a result, marijuana growers have been expanding their capacity as quickly as their balance sheets will allow. 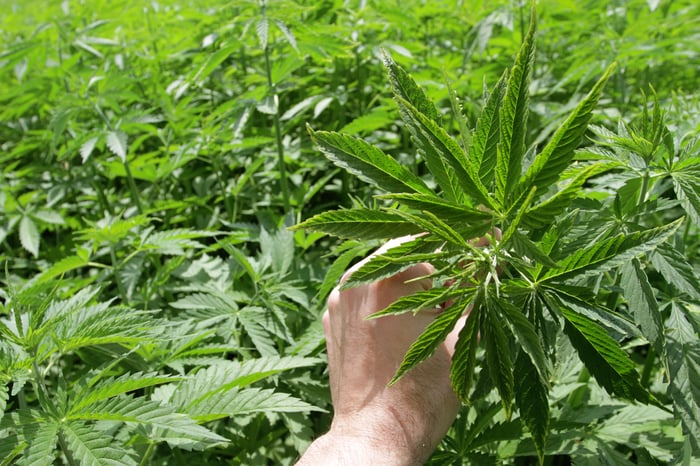 Arguably the most aggressive of these expansion efforts has come from Aurora Cannabis (ACB 7.75%). Toward the end of 2017, Aurora was in the midst of constructing its flagship project, the highly automated, 800,000-square-foot Aurora Sky facility that was to be capable of producing 100,000 kilograms of dried cannabis a year. When added to existing, but considerably smaller facilities, Aurora Cannabis was expected to produce just above 100,000 kilograms a year.

However, 2018 has been a ridiculously active year for the company.

In January, Aurora partnered with tomato producer Alfred Petersen & Son in Denmark to retrofit a 1 million-square-foot facility to produce cannabis. When complete, the Aurora Nordic facility will be capable of 120,000 kilograms of cannabis a year. Aurora Nordic will primarily be responsible for supplying cannabis to Europe's medical-marijuana-legal countries.

Recently, Aurora Cannabis completed its acquisition of Saskatchewan-based CanniMed Therapeutics, which added 20,000 active medical patients and 20,000 kilograms of production a year. When completed, it was the priciest marijuana acquisition in history.

And just last month, the company announced its intent to build a 1.2 million-square-foot facility, to be known as Aurora Sun, in Medicine Hat, Alberta. When complete, this facility will have the potential to produce 150,000 kilograms a year. Add this up, and we're looking at roughly 430,000 kilograms of production per year. 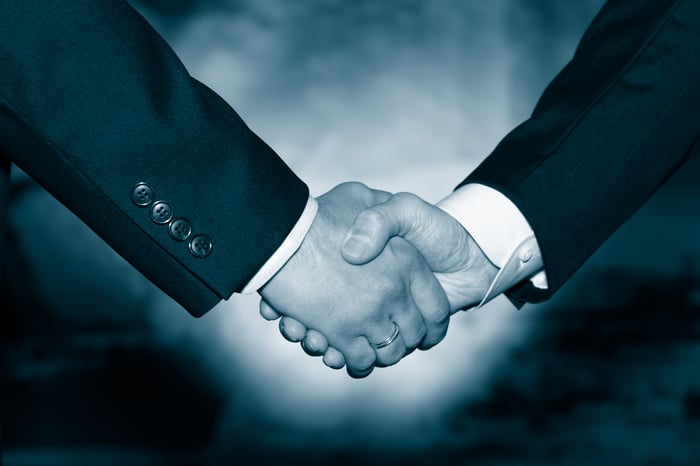 And Aurora isn't close to finished. On Monday, May 14, the company announced what has now become the largest marijuana acquisition in history, assuming it's completed. According to the company, it's acquiring Ontario-based MedReleaf (NASDAQOTH: MEDFF) for $2.5 billion in an all-stock deal. The 3.575 shares of Aurora for each MedReleaf share represent an approximate premium of 34%, based on the 20-day volume-weighted average prices for each company's common stock.

Why is Aurora hell-bent on acquiring MedReleaf? For one, it would allow Aurora to become the world's leading cannabis producer.

MedReleaf has three core facilities. Its Markham facility and ramped-up Bradford facility can combine for about 35,000 kilograms at full capacity. Recently, though, MedReleaf announced the purchase of 164 acres of land in Ontario, which it plans to use to quadruple its production. On 69 of these acres sits the Exeter facility, which MedReleaf will be retrofitting to grow cannabis. Retrofitting an existing facility rather than building a new one from the ground up saves time and money. Exeter, when complete, is expected to yield 105,000 kilograms of cannabis. All told, MedReleaf will allow Aurora's fully funded capacity to rocket to 570,000 kilograms per year.

Let's not forget that MedReleaf also has the 95 acres of land adjacent to Exeter that isn't being used. MedReleaf has suggested that it could construct a facility that's one-and-a-half times the size of Exeter, if demand warranted such an expansion. This would allow Aurora Cannabis to increase its production to beyond 700,000 kilograms a year.

Acquiring MedReleaf also gives Aurora Cannabis access to new product lines. MedReleaf's AltaVie cannabis line goes after users who desire a higher-quality (and pricier) weed strain. Meanwhile, MedReleaf has regularly emphasized the importance of cannabis oils. Based on its most recent quarterly report, MedReleaf generated 21% of total sales from oils, up from just 3% in the year-ago period. 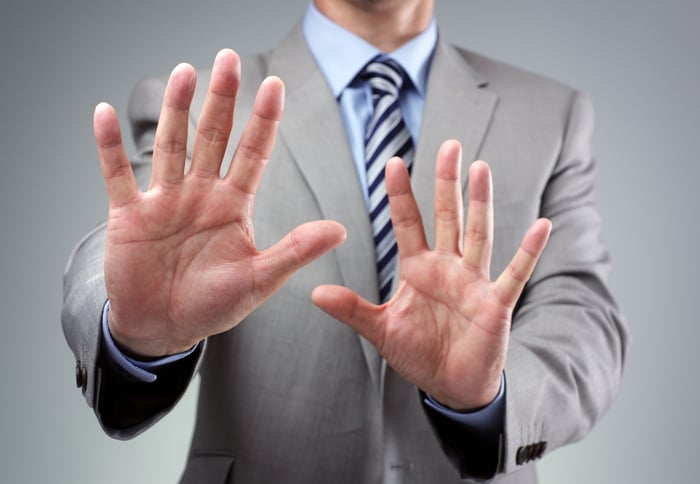 While the "bigger is better" ethos is seemingly engrained into the minds of pot stock investors, that's not always the case. In this instance, I'd dub this a terrible deal for both companies.

The biggest issue I've had with Aurora Cannabis -- and an issue that's only going to be magnified with this deal -- is its ongoing destruction of shareholder value via dilution.

Marijuana stocks usually don't have access to traditional banking services, since the banks themselves fear criminal and/or financial penalties for aiding cannabis companies. Instead, Canadian pot stocks almost always turn to bought-deal offerings to raise capital. With a bought-deal offering, common stock, convertible debentures, stock options, and/or warrants are sold in order to raise money that can be used to expand growing operations. The good news is that companies like Aurora Cannabis have had no trouble whatsoever raising capital. The bad news is that all forms of bought-deal offerings dilute existing shareholders by increasing the number of shares outstanding. It also makes it tougher for companies to turn a meaningful per-share profit, since there are more shares for net income to be divided into.

The deal to acquire MedReleaf is entirely share-based. To cover the 3.2 billion Canadian dollars, according to the exchange ratio implied in the press release, Aurora Cannabis is going to have to issue around 388 million shares in Canada. Of course, the exchange ratio is merely an implied ratio. Since the deal was announced, Aurora's share price has declined a bit more. As of May 14, some 405 million shares would need to be issued to cover the entirety of the deal.

Since the end of fiscal 2014, Aurora's share count has exploded higher from just north of 16 million shares to 564.8 million (based on its Canadian listing) as of the end of the third quarter. Taking into account its more than 26 million outstanding stock options, nearly 18 million convertible debentures, and over 8 million warrants, and adding in this acquisition, it's not out of the question that Aurora has more than 1 billion shares outstanding by this time next year. The impact of dilution on Aurora's shareholders, and that of MedReleaf's shareholders who are now tied to Aurora's share price, will be enormous. 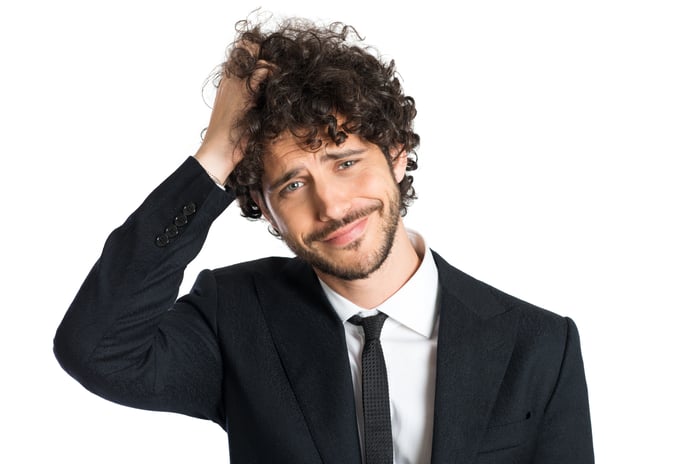 Should that not be enough to keep investors away from this merger, I'm also dumbfounded that Aurora would pay $2.5 billion for MedReleaf when it could get almost 100,000 kilograms more in annual capacity for a presumably similar buyout price by going after Aphria (NASDAQOTH: APHQF). Keep in mind that this is merely hypothetical, and I'm not suggesting that Aurora should be buying any company with its need to finance everything with share issuances, but Aphria would appear to offer far more bang for the buck than MedReleaf.

Like MedReleaf, Aphria has three core facilities. Its organic, four-phase project known as Aphria One is expected to yield around 100,000 kilograms of dried cannabis a year and be completed in January 2019. Similarly, its partnership with Double Diamond Farms, known as Aphria Diamond, should generate as much as 120,000 kilograms when complete. Lastly, the acquisition and expansion of West Coast Cannabis should yield 10,500 kilograms per year. That's roughly 230,000 kilograms of production for a current price tag of just below $2 billion.

It's possible that Aphria simply isn't looking for a buyer, but I'm still scratching my head at Aurora Cannabis's actions all around. If you're a marijuana stock investor, my suggestion would be to stay far away from this merger.