Please ensure Javascript is enabled for purposes of website accessibility
Log In Help Join The Motley Fool
Free Article Join Over 1 Million Premium Members And Get More In-Depth Stock Guidance and Research
By Rich Duprey - May 18, 2018 at 4:10PM

Most of the results look good, but the burger joint can't let customer traffic get away from it.

However, investors would be smart to keep an eye on the ability of the burger joint to continue attracting more customers. Profits rose at a higher rate than even sales, but McDonald's growth seemed to be predicated on charging higher prices in the quarter, not on improved customer traffic. 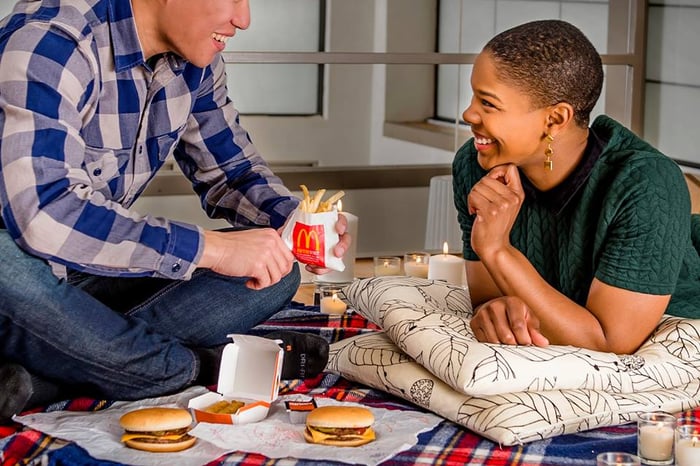 McDonald's is still having a tough time attracting customers to its U.S. stores. Image source: McDonald's.

A two-way street on traffic

Last year, McDonald's finally broke a four-year record of falling guest counts at its restaurants, during which its CEO, Steve Easterbrook, estimated the chain lost a half-million customers. By concentrating once again on the value end of its menu, McDonald's was able to woo a greater number of international customers to its stores, and it wants to keep that momentum.

Globally, comparable restaurant sales rose 5.5% with a 0.8% gain in traffic in the latest quarter, better than the 3.6% rise in comps McDonald's saw last year on a 0.6% increase in guest counts. However, in the U.S. market, customer traffic fell.

That's where investors need to keep close tabs, because while some analysts took McDonald's global comps numbers to indicate price hikes weren't scaring customers away, it seems that in the U.S., that's exactly what's happening.

The "burger wars" remain fully engaged with both Burger King and Wendy's continuing to promote their own value menus, but there are also other chains like Taco Bell, Dunkin' Donuts, and Sonic making the competition especially intense. Even Chipotle Mexican Grill wants to add a breakfast menu.

Consumers simply have a lot of choice when it comes to where to eat, and McDonald's raising prices may have bolstered profits at the expense of the customer base.

In January, the company launched its $1 $2 $3 Dollar Menu, which hasn't driven guest checks lower as some feared, but neither is it attracting more customers. Easterbrook recognized that and says McDonald's has the flexibility to keep finessing the menu to make it even more attractive to customers, which is hopeful for future growth and getting diners back in the door.

Although McDonald's stock has pulled back from the all-time highs it hit earlier in the year, it is not quite a bargain with a forward price-to-earnings of 21x, on par with peers like Wendy's and Restaurant Brands International.

Yet the market may be missing some opportunity with McDonald's stock. Some of the chain's newest marketing pushes are only just starting. For example, it introduced a 2-for-$4 promotion in mid-March, which represents a value deal comparable to the competition, and that's on top of the just-launched fresh beef Quarter Pounder. Although Wendy's PR department has been trying to make a lot of hay over the fact that all of its burgers are fresh beef, while McDonald's is only making the Quarter Pounder from such meat, Easterbrook says it hasn't seen any blowback from the fresh and frozen comparison.

Having already raised prices, McDonald's may have done the hard work early, even if it drove some customers away. The new menu items, particularly at the value end, give the chain a chance to lure those customers back, which could drive sales, profits, and its stock higher.

Investors still need to watch how McDonald's guest counts trend throughout the year, particularly in the U.S. But not only can McDonald's regain those all-time highs, it could eventually break through that ceiling on its way to becoming a $200 stock a year from now.