There's a disruption in the narrative of the theme park war that's been brewing for decades in Central Florida. Comcast's (NASDAQ:CMCSA) Universal Orlando had been gaining ground on Disney (NYSE:DIS) in Florida, closing the attendance gap every year since the game-changing debut of The Wizarding World of Harry Potter in 2010.

Comcast's streak came to an end in 2017. Neither company releases annual attendance data across its parks, but industry watcher Themed Entertainment Association does. Its annual global attendance report was released on Thursday, and it shows that Universal Orlando grew its turnstile clicks by just 2% to 19.747 million last year. Combined attendance at Disney World's four theme parks rose 4% to hit 55.872 million visitors. 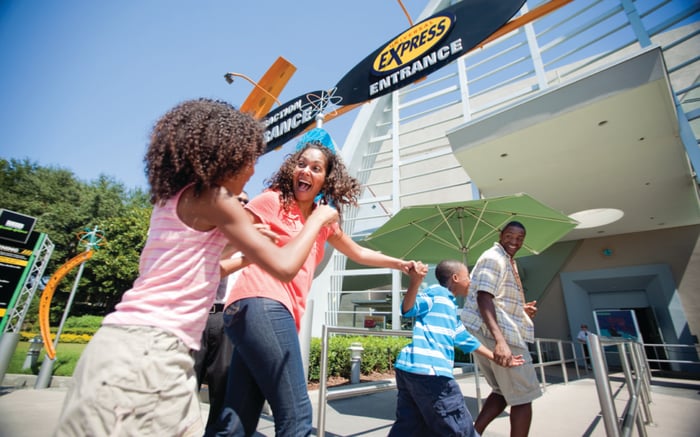 Universal Orlando is losing momentum at the worst possible time. Pandora -- The World of Avatar at Disney's Animal Kingdom raised the bar in terms of what high-tech attractions can do last year, and the animal-themed park accounted for the lion's share of Disney World's attendance gains in 2017. Disney's just getting started. Toy Story Land should keep guests flocking to Disney World when it opens at the end of next month, and then we get to the more highly anticipated attractions that will start arriving in 2019.

Comcast's once booming theme park hotbed hasn't been as hype-blessed as its rodent-helmed neighbor to the south lately. The last three new theme park attractions that Universal Orlando has introduced have received mixed to borderline negative guest reviews.

The slowdown in popularity comes just as Universal Orlando is building up its lodging capacity. It will be opening a new hotel annually through at least 2020. Outside of a Harry Potter-themed family coaster opening next year -- likely a winner for Comcast, but one that replaces a pair of high-capacity adult roller coasters that it closed last year -- there doesn't appear to be anything major coming to Universal Orlando until 2020 at the earliest. By the time Comcast gets to develop the massive tracts of land it has been acquiring, Disney will have added at least a half-dozen more major attractions and experiences to its four parks.

Universal is making big investments in turf and beds at a time when Disney is ramping up its e-ticket attractions. It's easy to see who will win that fight. A few years ago, the roles were reversed, and it helped Comcast close the gap with a complacent Disney.

Harry Potter may come to the rescue next summer. Super Mario may do the trick a few years later. However, momentum has turned in favor of the theme park giant. Comcast saw how complacency led to stagnancy at Disney. It can't afford to follow the same blueprint.