Fans of the original Toy Story movie know that the grand scheme to free Buzz Lightyear and his fellow mistreated playthings starts with the simple command of setting a wind-up frog in motion. This summer, Disney (DIS 2.90%) hopes to "wind the frog" with Toy Story Land, opening at Disney's Hollywood Studios in Florida come June 30. The theme park giant hopes that the Pixar-themed expansion will be enough to woo tourists that may be putting off a trip to the Central Florida until Star Wars: Galaxy's Edge opens a year later.

Beefing up the profile of Disney World's least visited theme park will be a priority in the next two years. Star Wars and the company's first Mickey Mouse-themed ride will open in 2019, but let's not write off the impact that Toy Story Land can have on turnstile clicks. The family-friendly Slinky Dog Dash coaster will anchor the expansion, but there's also a creative flat ride, a lunch-box shaped counter-service restaurant, and character greeting opportunities. 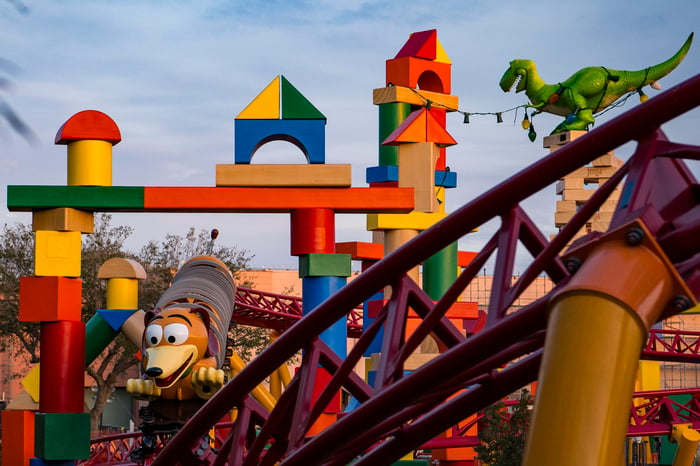 Toy Story Land won't officially open for another two months, but Disney's already getting the Buzz buzz going. This week it announced that guests checking into Disney resort hotels up to 60 days from now can start making FastPass reservations if they will still be there until at least June 30. The news may not seem like much, but it pretty much confirms that Toy Story Land will open on time if not sooner.

Disney also announced that the park will open at 8 a.m. and close at 10:30 p.m. for a limited time starting in July, giving visitors more time in the park than the typical summertime hours. Disney did something similar at Disney's Animal Kingdom last year as summertime masses descended on Pandora-The World of Avatar, a smart move that likely played a significant role in increasing attendance and revenue for Disney's theme park segment.

Earlier this month, Disney put out pictures of some of the unique menu items that will be available at Woody's Lunch Box, including breakfast items given the early opening hours and the realization that most park guests will flock there on arrival in the mornings.

Momentum is in Disney's corner right now. It's coming off a blowout quarter as its biggest attendance increase in years and improving per-guest spending combined to deliver double-digit revenue growth. The theme park leader also revealed in its most recent earnings call that hotel bookings are trending higher than they were a year earlier with guests spending a lot more -- up a whopping 13% -- to square away on-site reservations.

Toy Story Land will be a bigger deal for Disney than last year's well-received Avatar-themed expansion because it owns Pixar. There will be plenty of people who decide to put off a trip to Disney's Hollywood Studios until next year's more ambitious slate of additions, but you have to start somewhere. Wind the frog Disney, and hope that it sets the master plan in action.