Please ensure Javascript is enabled for purposes of website accessibility
Log In Help Join The Motley Fool
Free Article Join Over 1 Million Premium Members And Get More In-Depth Stock Guidance and Research
By Danny Vena - May 19, 2018 at 2:18PM

The ongoing trend towards free-to-play games in the battle royale genre may have stolen this company's momentum.

Going into its fiscal fourth-quarter financial release (which ended March 31, 2018), Take-Two Interactive Software, Inc. (TTWO 1.90%) faced many of the same questions seen in the rest of the video-game industry. A recent trend toward free-to-play battle royale games, led by Epic Games' Fortnite, has captured the public's imagination, leaving fewer players opting for other games.

Take-Two wasn't immune to the trend, with revenue that fell 21% year over year. Net bookings, which takes deferred revenue into account, didn't do much better, increasing a paltry 1%. 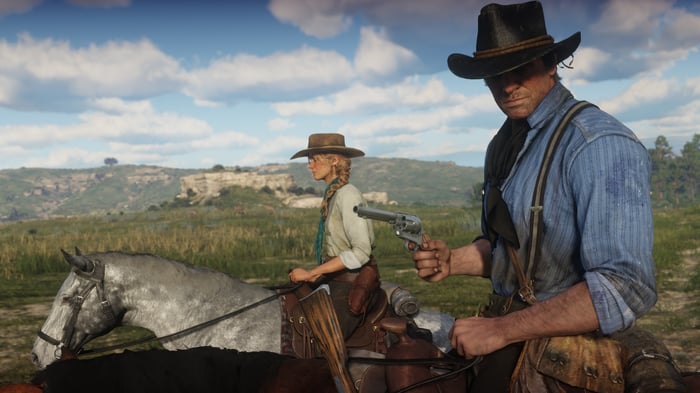 What happened at Take-Two this quarter?

For the just completed quarter, Take-Two produced revenue of $450 million, below the company's forecast for a number in the range of $460 million to $510 million provided at the end of last quarter.

Net bookings grew to $411.4 million, up 1% year over year, but far below analysts' consensus estimates of $444.63 million. The company's earnings per share of $0.77 fell 13% compared to the prior-year quarter, in line with analysts' expectations for $0.77 earnings per share.

The company announced yet another delay in the release of an upcoming game: "The highly anticipated title from one of 2K's biggest franchises, which had been planned for release during the current fiscal year, is now planned for launch during fiscal 2020 to allow for additional development time." This has become a familiar refrain to Take-Two shareholders, as the company has a long documented history of delaying game releases.

For the full year, the company is guiding for GAAP net revenue in a range of $2.5 billion to $2.6 billion, which would represent impressive 42% year-over-year growth at the midpoint of its guidance. Take-Two expects diluted earnings per share in a range of $1.53 to $1.80, which would be more than double the $0.77 per diluted share the company generated in the just-completed fiscal year.

So, what's causing all of that full-year optimism? Take-Two is pinning its hopes on the long-awaited release of Red Dead Redemption 2, which is now due to launch on October 26, after several well-publicized delays. If the company plans on reaching its lofty goals, it can't afford another postponement.