Please ensure Javascript is enabled for purposes of website accessibility
Log In Help Join The Motley Fool
Free Article Join Over 1 Million Premium Members And Get More In-Depth Stock Guidance and Research
By Natalie Walters – May 20, 2018 at 10:11AM

Snap may be half Facebook's age, but its cool factor has quickly worn off.

When Snap (SNAP 3.51%) went public, some investors were giddy about getting the opportunity to invest in a company that was so popular with millennials and teens, the groups that will be the economic driving force for the next few decades.

The general narrative was that Snapchat was cool and used by younger people, while Facebook (META -0.93%) was lame and overrun with older folks. But that narrative hasn't led to Snap unseating Facebook as the best-in-class social media company for investors. 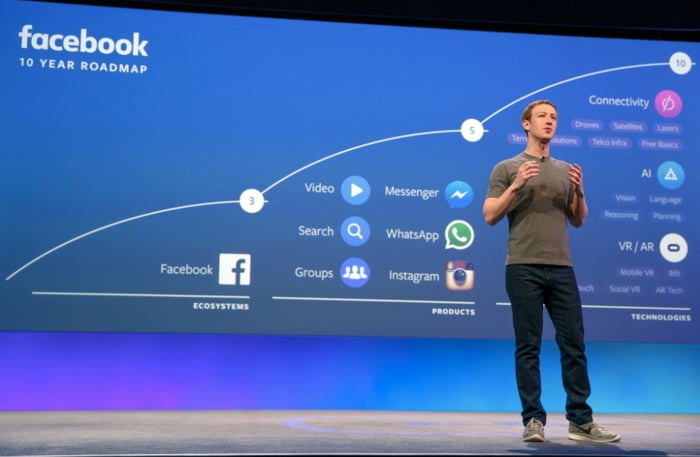 Facebook and Snap may both be a morph of a tech and social media company. But that's really where their similarities end. If you look back at Facebook's performance around its IPO and compare it to Snap's performance in the past year, you will see just how different their stories are.

Facebook went public in 2012 when it was eight years old and valued at just $104 billion. Today, its market cap has grown to $512 billion. Meanwhile, Snap went public last year when it was five years old and valued at $24 billion. Today, its market cap has actually dropped to $13.4 billion. But that's just the beginning of the stark contrast between the two companies around their respective IPOs.

As you can see, when Facebook went public, it had already proven itself the year before by growing its revenue 88% year over year to $3.7 billion. It also reported a net income of $1 billion that year. On the other hand, Snap lost $514.6 million in the year prior to going public. While Snap's revenue did show an impressive year-over-year growth rate of 589.1% to $404.5 million that year, Snap had easier year-over-year comparisons than Facebook. Furthermore, Facebook was profitable and Snap was far from it.

And despite the large revenue base, Facebook continues to pull off impressive top-line growth five years after going public. For 2017, Facebook's revenue increased 47% year over year to $40.7 billion. Based on Snap's performance so far, you'd be hard-pressed to find someone who could envision the company pulling off that type of growth in 2022.

If you zoom out and look at the two companies' overall addressable market, Facebook swamps Snap. In fact, Snap's addressable market is estimated to be 80% smaller than that of Facebook, and Snap has already passed 50% penetration, according to a Needham analyst.

That's because Snapchat is mainly used by millennials, while Facebook is used by both millennials and older generations. Snap tried to address this issue with its recent redesign that was supposed to make its app easier to use for older people. However, in redesigning its app, Snap alienated its core millennial users, who complained that the redesign made the app harder to use. The company even had to walk back on some of the changes to help appease its base audience.

Snapchat's growth has also been limited by its poor Android app, which has been criticized for its lag time, random crashes, and picture and video quality. Snap is attempting to address those issues with an all-new Android app that's expected to debut sometime between July and September.

This all explains why even though Facebook is 14 years old, it still managed to grow its daily active users (DAUs) 13% year over year to 1.45 billion this past quarter, beating expectations. This also represented a 3.5% increase in DAUs just from the previous quarter.

Meanwhile six-year-old Snap's user growth already seems to have peaked. For the past quarter, the company reported a 15% year-over-year growth to 191 million DAUs, missing estimates for 194.2 million. Even worse, Snap's DAUs grew just 2% from the past quarter -- its slowest user growth rate ever, down from 5% growth in the fourth quarter and 3% in the third quarter.

To sum things up, Snap is less than half the age of Facebook, but its user growth rate is already slower than Facebook.

Besides its smallish addressable market, another reason Snap is struggling to grow is because Facebook-owned Instagram tends to copy Snapchat's best features, apply them to its larger installed base, and make them better.

For example, Snapchat was the one who first created the popular Stories feature that allows users to set photos and videos as their status for 24 hours before they disappear. However, Snapchat's app has just 191 million daily active users (DAUs) while Instagram's copycat Stories feature hit 300 million daily users back in November. Instagram was able to beat Snap at its own game.

Knowing that, it might not surprise you that some researchers estimate Instagram to be worth an incredible $100 billion. That means Facebook's side photo-sharing app Instagram is worth about seven times Snap's entire $14 billion market cap. Despite all the comparisons between Snapchat and Instagram, they really aren't as comparable outside of the fact that they allow people to share photos.

As you can see, after a closer look, Facebook and Snap hardly seem comparable.

Snap seems further than ever from profitability after its latest dismal quarter and as it continues to struggle to grow outside of the millennial age group. Things seem particularly hopeless after its much-hyped redesign geared toward non-digital natives fell flat with its core users. And yet, with a price-to-sales ratio of 14.6 for the trailing twelve months, Snap investors are still having to pay a premium for shares of the unprofitable company.

On the other hand, Facebook has been profitable since 2009 and just hit an incredible 1.45 billion daily active users. And that's not even taking into account the over 800 million users that its other social media app Instagram reported last September. Even with all that, shares of Facebook trade at a lower price-to-sales ratio than Snap, making it even more clear which social media company is a better choice for investors.