Please ensure Javascript is enabled for purposes of website accessibility
Log In Help Join The Motley Fool
Free Article Join Over 1 Million Premium Members And Get More In-Depth Stock Guidance and Research
By Jamal Carnette, CFA - May 21, 2018 at 1:32PM

To take on Amazon and Walmart, Kroger had to form a strategic partnership to bolster online operations.

If there's been one company that's borne the brunt of Amazon.com's purchase of Whole Foods, it's been Kroger (KR -0.55%). Since the deal was announced last June, Kroger shares are down 17%, including a 10% decrease the day the deal was announced. The thesis was Whole Foods' name cachet and Amazon's logistical excellence would disrupt the grocery industry.

To date, however, Amazon's purchase of Whole Foods has been less paradigm-changing and more a continuation of status quo. In fact, in the three reported quarters Kroger has exceeded analyst expectations for revenue and beat or matched adjusted earnings per share estimates.

Still, Amazon's entrance into the industry exposed a key weakness with Kroger: online operations. As more grocers like Walmart and Target have invested in online ordering and delivery, Kroger was at risk of falling behind and losing market share. The company's newest announcement addresses its biggest weakness. 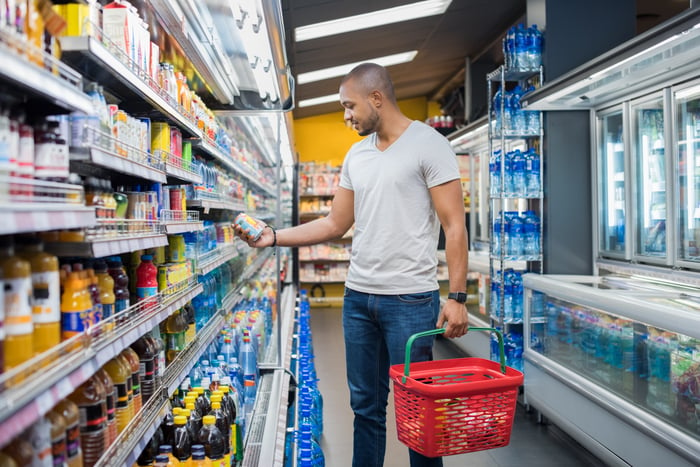 Kroger may have caught up in the digital arms race

According to a recent joint announcement, Kroger is partnering with British grocer Ocado to build out its online ordering and delivery operations. Unlike traditional grocers, Ocado is digital-only, eschewing the storefront channel, making it a perfect partner for Kroger and its near-3,000 supermarket footprint. The partnership is designed to bring Kroger up-to-speed with the digital, logistical, and robotic capabilities needed to quickly ramp up online ordering.

Before the partnership Kroger's technology could be considered lacking at best. Although the company currently has a digital presence dubbed ClickList, it wasn't fully integrated with its digital coupons and rewards program until the fourth quarter of 2017. Online delivery currently relies fully on third-party providers and is only available at one-third of Kroger's total locations, which would make it hard to improve the experience.

Meanwhile, competitors like Walmart are spending billions of dollars on buying online retailers -- Jet.com -- while improving the delivery experience for both grocery and other consumer goods to compete with Amazon. Kroger's partnership quickly brings the grocer into the digital age, versus an internally developed system that would have taken the company years to develop.

Online will not be a game changer, at least not yet

In the long run, it's possible Amazon's purchase of Whole Foods will be a huge blow to Kroger, especially if online grocery shopping becomes massively popular and highly competitive. At its heart, Amazon is a technology company. This obviously gives Amazon an inherent advantage over a grocery store in the race for digital supremacy.

However, it's likely many shoppers will continue to select an in-store experience and remain loyal to their local brands in this highly concentrated industry, at least in the short run. As the largest pure-play grocer by sales, Kroger benefits from its massive customer base alongside the benefit of inertia and an aversion to new grocery experiences.

Still, it was a wise decision by Kroger to build out its online capability to avoid the possible risk associated with a change in consumer behavior. And unlike Amazon and Walmart, Kroger's stock is still priced for a worst-case scenario, trading at 11 times forward earnings, versus 17 times for the greater S&P 500.

A depressed valuation may have been prudent considering Kroger had no cohesive plan to compete in a possibly digitally driven future, but it should be re-evaluated by the market if the Ocado partnership turbocharges its digital operations.