Please ensure Javascript is enabled for purposes of website accessibility
Log In Help Join The Motley Fool
Free Article Join Over 1 Million Premium Members And Get More In-Depth Stock Guidance and Research
By Lee Samaha - May 21, 2018 at 8:17AM

The stock prices of the two companies have diverged significantly since the bid was abandoned. Should Rockwell Automation regret not accepting the offer?

It's not been an easy six months for shareholders in Rockwell Automation. Back in November, Emerson Electric finally abandoned its attempt to buy its smaller peer, and since then Emerson has outperformed Rockwell by nearly 25%. What's more, Rockwell's current stock price of around $177 is a 21% below Emerson's final bid of $225 per share. Did Rockwell's board make a mistake in rejecting the offer? 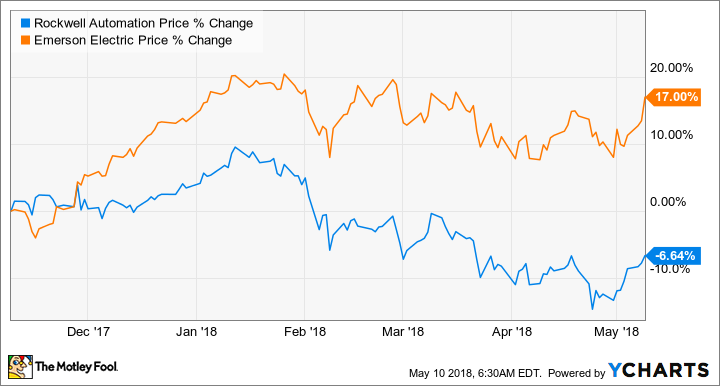 What happened in the last six months

In a nutshell, the end-market outlook in automation industry has shifted more toward Emerson Electric's strengths in process automation (continuous flow of fluid materials in heavy industries such as oil and gas, chemicals, power, etc.). Meanwhile, some of Rockwell's traditional factory automation (automated processes in manufacturing) markets such as automotive and consumer electronics have shown some signs of weakness.

You can see this shift in three ways. First, on the recent second-quarter earnings call, Rockwell CEO Blake Moret claimed heavy industries (including oil and gas, mining and metals) sales grew above the company average.

Second, Emerson raised its full-year sales guidance to the high end of its previous range of 5%-7%, while Rockwell merely maintained guidance of 3.5%-6.5%.

Third, 3M Company reported a sharp drop in growth in its electronics segment in the first quarter and machine vision company Cognex Corporation surprised investors by lowering expectations for capital spending among its consumer electronics customers. In addition, a slowing automotive production market (a traditional strength for Rockwell) means automakers may slow capital spending. Rockwell CFO Patrick Goris already expects "flat to slightly down" sales to the automotive market in 2018.

Whichever way you look at it, Emerson's near-term outlook has improved relative to Rockwell's, and it's the second quarter in a row in which its organic sales are growing faster than Rockwell's. 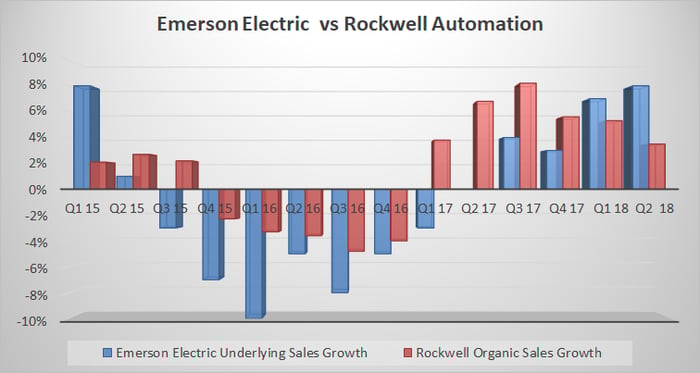 Data source: Company presentations. Year-over-year growth. Chart by author. NOTE: Emerson calls organic sales "underlying sales" which is what is reported in the table below.

No one likes to see their stock underperform a peer, not least one that tried to buy your company at a significant premium to the current price.

Moreover, there is an increasing sense of confidence about Emerson hitting or exceeding its earnings targets in its fiscal 2018. The price of oil (West Texas Intermediate) is above $70 from $55 six months ago and will surely spur capital investment in Emerson's process automation solutions.

Meanwhile, the midpoint of Rockwell Automation's organic sales growth guidance of 5% implies a pickup in growth in the second half to 5.5% compared to 4.4% in the first half. This won't be a walk in the park, because as you can see in the chart above, Rockwell is going up against some pretty strong growth numbers in the third and fourth quarters of 2017. 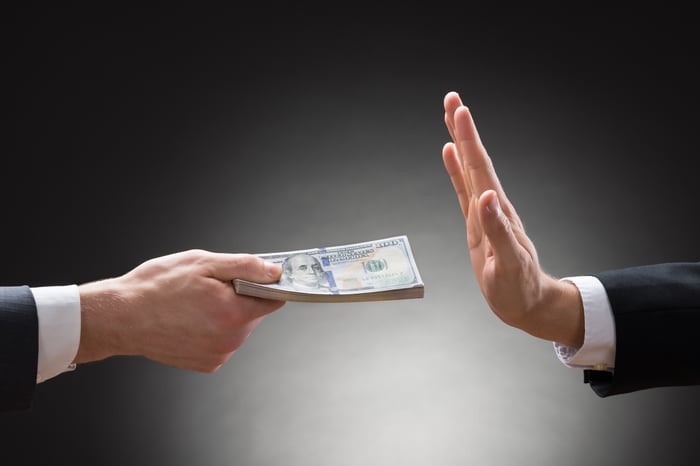 Did it make sense for Rockwell Automation to reject the $225-per-share bid from Emerson Electric? Image source: Getty Images.

If you are an investor focused on the near term, then it obviously does matter. However, for more long-term-focused investors, the events of the last six months are not worth worrying about. There are two key reasons for this.

Long-term investors are focused on the strategic direction of the company rather than a one-year outlook, and keeping Rockwell independent means investors can benefit from Rockwell's multi-industry exposure to the secular trend of the industrial internet of things (IIoT.)  Emerson is also expanding its offerings in this area, but if Rockwell were part of Emerson, it would immediately be a less focused IIoT company. Moreover, Rockwell investors may not want to gain extra exposure to heavy industries, an end market that tends to be lower-margin for Rockwell in any case.

Nor will manufacturing optimists

The second argument is that the end-market environment is actually positive for Rockwell in 2018, it just hasn't shown up yet. The subject came up on the earnings call, with Melius Research analyst Scott Davis noting that 4.4% organic sales growth in the first half "doesn't really feel" like the kind of growth you might expect in "the early stages of the manufacturing cycle."

The gist of Moret's response was "I agree with you Scott about the weirdness of this. I mean capital with our customers has still remained on the sidelines compared to some of the historic ratios". Indeed, a quick look at some industrial indicators confirm strength in U.S. industrial production (above 100 means expansion) and Institute for Supply Management indexes (above 50 means expansion). It's a positive environment and Rockwell may well see a material improvement in some of its non-automotive end markets in 2018. 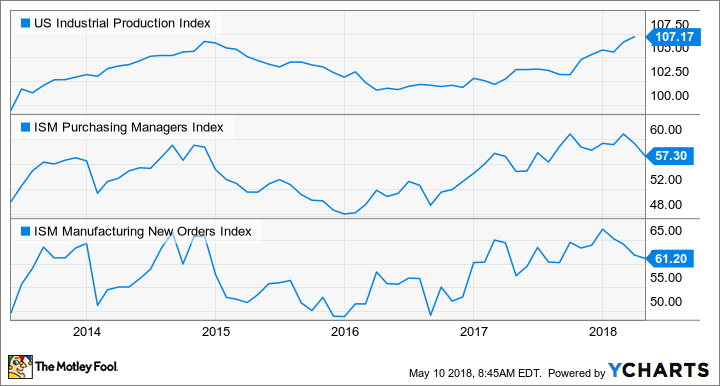 Rockwell's second-quarter results and guidance were underwhelming while Emerson Electric appears to be gathering momentum, but that doesn't mean Rockwell was wrong to reject the bid. The key consideration is whether the industrial internet and multi-industry exposure of Rockwell is a better long-term bet than being part of a larger company with heavy exposure to energy prices.

Rockwell's board decided upon the former, and that means investors can still make a highly focused investment in discrete automation and IIoT through buying Rockwell stock -- that's a good thing, even if it didn't seem that way over the last six months.