Please ensure Javascript is enabled for purposes of website accessibility
Log In Help Join The Motley Fool
Free Article Join Over 1 Million Premium Members And Get More In-Depth Stock Guidance and Research
By Danny Vena - May 22, 2018 at 9:46AM

Heading into the company's earnings report, there was a lot going on with Walmart Inc. (WMT 1.32%), the world's largest retailer The company recently prevailed in its bidding war to acquire India's biggest e-commerce platform Flipkart for a reported $16 billion. Walmart also sold its U.K.-based Asda supermarket chain to competitor Sainsbury in a deal valued at $10 billion, with Walmart owning a 42% stake in the new, larger company.

Last quarter's disappointing results, which marked slowing e-commerce growth and "operational challenges," also weighed on investors. At the time, Walmart said that lapping the Jet.com acquisition and short-term inventory issues were to blame. 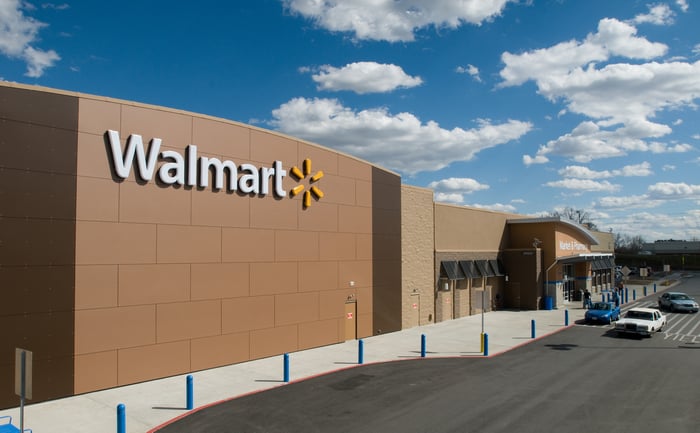 What happened at Walmart this quarter?

Excluding one-time items, adjusted earnings per share of $1.14 declined 14% compared to the prior year, but also came in ahead of expectations of $1.12 per share. Walmart said that profit margins suffered as the result of competitive pricing and higher shipping costs.

Comparable sales at U.S. Walmart stores open at least a year increased 2.1% year over year, in line with analysts' forecasts, while customer traffic increased by 0.8% compared to the prior-year quarter. Comp sales at Sam's Club stores grew by 3.8% over the same period last year, and shopper traffic jumped 5.6%.

Revenue at the company's international locations was helped by exchange rates, growing to $30.3 billion, up 11.7% year over year. On a constant currency basis, sales of $28.3 billion grew 4.5% compared to the prior-year quarter.

All eyes were on e-commerce, and it didn't disappoint. Online sales rebounded from a decline in the prior quarter, up 33% year over year, and Walmart said it expects full-year e-commerce revenue to grow 40% compared to the prior year. Free two-day shipping and a redesign of its Walmart.com website late in the quarter helped boost growth.

Walmart's president and CEO Doug McMillon had this to say about the quarter:

We delivered a solid first quarter, and we're encouraged by the continued momentum across the business. We're transforming to better serve customers. We are changing from within to be faster and more digital, while shaping our portfolio of businesses for the future. Our strong cash flow and balance sheet provide flexibility to do so.

Walmart reported that its investment in Flipkart will negatively impact its fiscal 2019 earnings per share by about $0.25 to $0.30. Similar to previous years, the company also said it will provide full-year guidance at the end of the next quarter.

In spite of challenges, Walmart is making all the right moves to compete in a world that is increasingly turning to e-commerce.