Please ensure Javascript is enabled for purposes of website accessibility
Log In Help Join The Motley Fool
Free Article Join Over 1 Million Premium Members And Get More In-Depth Stock Guidance and Research
By Rich Smith - May 22, 2018 at 10:37AM

The turnaround is upon us.

Macy's (M 6.72%) stock popped more than 10% last week after reporting earnings that "beat analyst estimates on all accounts" -- and that may be only the beginning.

Since scoring its 11% gain after earnings last Wednesday, Macy's stock has marched steadily higher as investors took time to digest the results. This task completed, analysts at Susquehanna Financial announced this morning they're upgrading it to positive and assigning a $43 price target to this $35 stock. 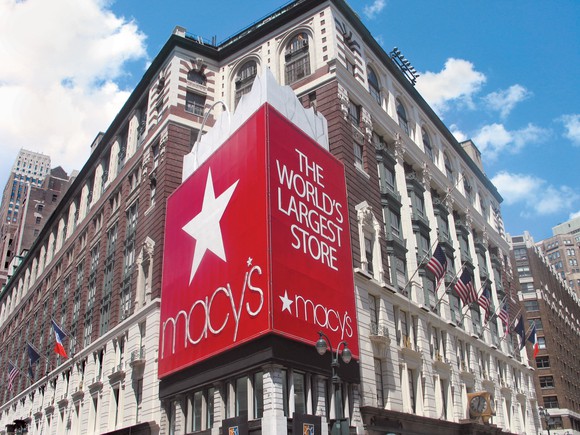 Macy's released earnings on Tuesday evening last week. Sales rose only 3.6%, but that was still much better than what analysts had been expecting Macy's to report, and same-store sales among stores Macy's owns did even better -- up 3.9%.

All told, Macy's moved $5.54 billion worth of merchandise in the first quarter of 2018 and earned $0.45 per share. Gross margin at the retailer expanded by 70 basis points to 39%, while operating profit margin gained 20 basis points, rising to 4.3%. Profits on the bottom line -- $131 million net of all costs -- increased 70% year over year and gave Macy's a 2.4% net profit margin for the quarter. Macy's credited its ability to maintain a "healthy inventory position" for keeping discounts in check and profit margins high.

CEO Jeff Gennette noted that these results "exceeded our expectations," with Macy's showing strength in "all three brands -- Macy's, Bloomingdale's, and Bluemercury -- as well as across all geographic regions and families of business."

And that good performance could get even better. Gennette promised investors "we have more work to do" in quarters to come. Still, based on how well things are progressing so far, the CEO felt confident enough to raise guidance for both sales and earnings for the rest of this year.

Macy's now expects to earn adjusted earnings per diluted share of $3.75 to $3.95 in fiscal 2018. Granted, this number excludes "anticipated settlement charges related to the company's defined benefit plans as well as impairment and other costs." But even so, Macy's adjusted earnings in Q1 weren't that far off from what it was able to report using more stringent GAAP accounting measures (only $0.03 per share less), so the final GAAP figure should still look pretty good.

What Susquehanna had to say about that

All in all, Susquehanna considered Macy's to have turned in a fine report. The banker cited the company's positive same-store sales figures and its "unexpected strong operating" margins as being of particular note, according to a write-up today on StreetInsider.com (subscription required).

What really seems to get this analyst's attention, though, is the valuation of Macy's stock. As Susquehanna argues, Macy shares "trade at 9.0x current-year earnings." (Note: The stock actually sells for even cheaper than that when valued on trailing earnings -- just 6.6 times earnings.) However, says the analyst, "historically even department stores trade higher, around 11x-12x, particularly when company operations are showing better momentum, when we have seen 13x earnings."

As investors begin to key in to this fact, Susquehanna predicts Macy's P/E ratio will grow over time. The analyst bases its prediction of $43 a share on an expectation that investors will pay at least 10.5 times Macy's expected next-year earnings of $4.11 a share. But if the analyst's theory is right, it could theoretically sell for as much as 24% more than that. For example, 13 times $4.11 per share would imply a $53 stock price -- and close to a 50% profit for new investors today.

Is that result likely? I have to say that to me, hoping for 50% profits on Macy's stock seems like a stretch. Still, with shares paying a 4.4% dividend yield, and consensus expectations for the company's earnings growth still very conservative (S&P Global Market Intelligence data suggest Macy's may grow earnings only 1.5% annually over the next five years), the stock offers a respectable 5.9% total return. Worst case, that at least doesn't seem crazy expensive given Macy's 6.9 P/E ratio.

What's more, if Macy's grows anywhere near as fast as Susquehanna seems to think it's capable of -- or even just as fast as it grew last quarter -- the stock really could be a bargain.