Please ensure Javascript is enabled for purposes of website accessibility
Log In Help Join The Motley Fool
Free Article Join Over 1 Million Premium Members And Get More In-Depth Stock Guidance and Research
By Lee Samaha – May 22, 2018 at 9:35AM

Though GE is showing positive signs broadly, the conglomerate's near-term future depends on its ability to stabilize one key part of its operations.

This hasn't been a good year so far for investors in General Electric (GE 2.73%) -- its stock price is down almost 19% at the time of this writing. However, shares are actually up 9% in the last month. While it's not a good idea to focus too much on short-term price movements, that bounce does highlight the chance that GE could be a value stock to watch in 2018.

In light of that possibility, let's examine what's going right for GE today, what's going wrong, and consider the single most important thing investors will want to see from the company before they can feel confident about buying its stock. 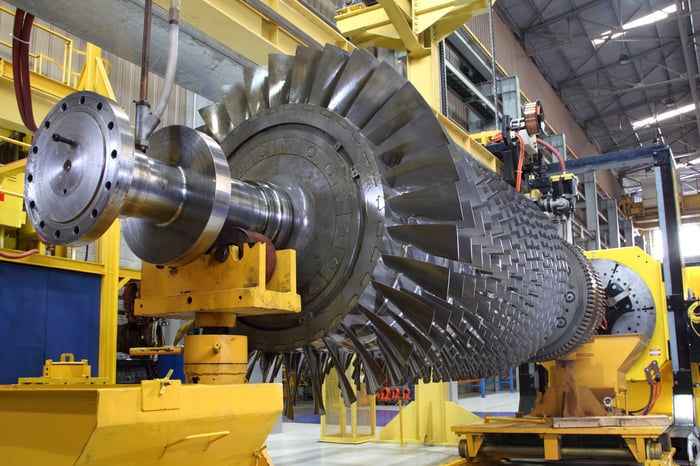 The positives for General Electric

Although GE was tracking toward the low end of its full-year 2018 EPS guidance range of $1 to $1.07 after its first quarter, a deeper look at its Q1 earnings report shows some important positive trends.

In addition, it's likely that the rising price of oil -- above $70 per barrel today -- will boost prospects for Baker Hughes, a GE Company (BKR 6.30%), which is majority owned and controlled by GE. Indeed, the stock price of the oilfield services giant has moved up in anticipation, and its U.S. rig count (the number of its rotary rigs actively exploring and drilling) shows marked improvement -- all of which is good news for GE. 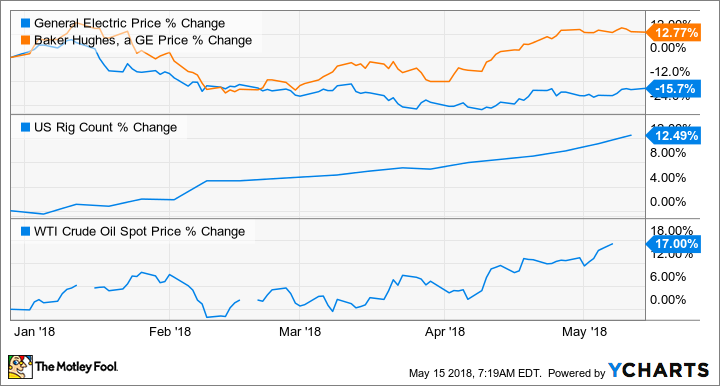 That said, Flannery and CFO Jamie Miller were guiding toward the low-end of the year's forecast range for a reason. In a nutshell, what Miller said about the power segment's outlook on the Q1 earnings call implies its 2018 earnings will be $500 million lower than previously estimated -- which translates to an EPS cut of around $0.05.

Given that the difference between the low and high ends of GE's implied guidance for its aviation and healthcare units is around $310 million by my calculations, that power segment shrinkage suggests that hitting its 2018 EPS guidance range won't be a walk in the park. As discussed above, improving conditions for Baker Hughes are likely to boost GE's results, but the real problem is the ongoing deterioration in the power unit's end markets.

Both GE's current and previous leaders have underestimated the deterioration in demand for gas turbine equipment and servicing. That weakness is being caused by a combination of stagnant electricity demand, rising use of renewable sources for electricity generation, and declining costs for energy storage (which makes renewables a more viable option).

This shrinkage in its end markets is particularly problematic because GE power was structured for a far higher level of demand. The company is making progress on cost-cutting, but as Miller put it on the Q1 earnings call: "...from a market perspective, as we talk about the market, what you really see there is progress burn not being replaced as quickly by progress coming in from new orders. So, Power for this year continues to look like a real second-half profile story."

What this means for GE Power

The effect of all this on GE can be seen in its informal guidance for HDGTs, aeroderivatives (smaller turbines derived from aviation engines) and advanced gas path (AGP) solutions. AGPs are upgrades to existing turbines, and they've been so successful that they may have cut into new turbine demand, according to CEO of GE Power Russell Stokes.

GE started 2017 expecting to ship between 155 and 165 AGP units, and around 96 aeroderivatives -- in the end, it only shipped 80 and 40 respectively. However, HDGT shipments of 102 were in line with the original guidance range of 100 to 105. Turning to this year, the table below summarizes the trends in GE's informal guidance.

The most important thing GE needs to do

GE's management has a lot of things on its plate. From divesting assets to ensuring it has enough liquidity to restructure the company and pay its dividend, its challenges are ongoing. Meanwhile, an SEC investigation into its accounting policies hangs over the company and management needs to regain the trust of the investment community.

However, even if most or all of these issues are successful, the one thing GE must do is stabilize its power segment, and investors will see evidence of that when GE stops reducing its power segment guidance. However, stabilizing sales from that unit won't be easy. Miller says she's expecting it to be a "second-half profile story," but demand trends suggest otherwise. Regardless, any additional cuts to GE Power's revenues would significantly threaten the conglomerate's EPS and its cash flow.