Please ensure Javascript is enabled for purposes of website accessibility
Log In Help Join The Motley Fool
Free Article Join Over 1 Million Premium Members And Get More In-Depth Stock Guidance and Research
By Lee Samaha – Nov 12, 2017 at 8:46AM

The power segment is the source of the most of the industrial giant's problems this year. Here's what investors need to know before buying the stock.

Power is General Electric Company's (GE -1.79%) core strength, and its gas turbines are usually seen as its single most important product. As such, it's concerning that the power segment is the main source of the company's recent troubles. In my view, if you're considering an investment in GE's stock, then you need to know what's going on with its power segment. So here's the lowdown on GE Power.

The segment was front and center among GE's issues during the third quarter, and it was the main cause of management's slashing full-year earnings guidance from an operating EPS range of $1.60-$1.70 down to $1.05-$1.10, Similarly, guidance for full-year cash flow from operating activities (CFOA) dropped from a range of $12 billion-$14 billion to just $7 billion.

CEO John Flannery outlined that power was one of the key drivers of the earnings guidance cut, and regarding CFOA guidance cut of $7 billion he said that "Power alone will be lower than expected by $3 billion on lower earnings and higher inventory."

"We are severely disappointed in the results of Power and are taking action to position the business going forward," CFO Jeff Bornstein said. A quick look at the trends in revenue and profits reveals why. Moreover, power equipment orders declined 32% in the quarter and are now down 9% on a four-quarter rolling average, while power services orders rose a miserly 1%. 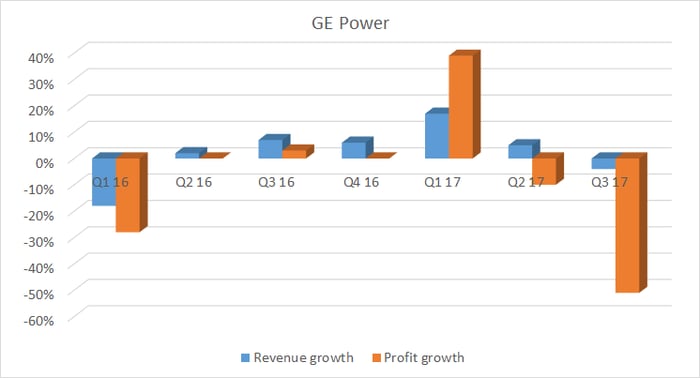 The cracks were beginning to show as far back as GE's fourth quarter of 2016, when the company fell six turbines short of the low end of its target to ship 110-115 turbines in 2016. Furthermore, in the first quarter of 2017, GE missed its CFOA forecast by $1 billion, with the power segment being largely responsible. Fast-forward to the second quarter and GE's power-services problems came to the surface with management first alerting investors that services revenue was trending weaker than expected.

There are two main issues with GE Power. First, end-market demand for turbines isn't strong, resulting in overcapacity in the industry -- something that key rival Siemens AG (SIEGY -0.88%) has been very vocal about in the past.  Indeed, Bornstein expects market demand for heavy-duty gas turbines to drop from 46 gigawatts in 2016 to 40 gigawatts this fiscal year. Throw in the likelihood of more competition from Siemens, and the outlook dims even further.

Second, according to Bornstein, "the structure of the services market has also changed," and GE Power services revenue is significantly lower than expected in 2017, with Bornstein expecting "issues to persist through the fourth quarter and 2018." This matters, because services tend to be higher margin than equipment, and because GE sells its power equipment with long-term service agreements attached, the last thing GE needs to see is a slowing growth in power services.

The result of these two issues was a 51% fall in power-segment profit in the third quarter, caused by a slump in GE Power margin to 7%, from 14% last year.

It's worth noting that GE has done a reasonable job under the circumstances. For example, the development of its market-leading H-class turbine has helped offset falling sales of its older technology E-class and F-class turbines, and the acquisition of Alstom's energy assets is probably the sort of thing a company should do in a weakening end market. In other words, consolidate the market and drive growth through synergy generation.

There's little GE can do about weak end demand, except wait for a cyclical upturn. That could take time. However, if Bornstein is right and there is a kind of structural change taking place in the power-services market, then GE's power problems could be even more far-reaching than currently disclosed.