Please ensure Javascript is enabled for purposes of website accessibility
Log In Help Join The Motley Fool
Free Article Join Over 1 Million Premium Members And Get More In-Depth Stock Guidance and Research
By Lee Samaha - Oct 7, 2017 at 8:09AM

Power matters to General Electric Company (GE 1.10%). The segment generated more than 28% of industrial profit in 2016 and is GE's best-known activity, with gas turbines being its most important product. Indeed, GE's success with its market-leading H-class turbine has broken world records for efficiency and driven order growth at the segment. That said, there are reasons to believe GE might come under pressure in the future, and here's how and why it matters.

Why the HA turbine is important to GE

Power is traditionally GE's most important segment, and its new H-class turbines (known as the 9HA) are important for four reasons. First, GE's management and key rival Siemens AG (SIEGY -0.01%) both acknowledge there is overcapacity in the gas turbine market and the HA turbine has been critical in driving growth. 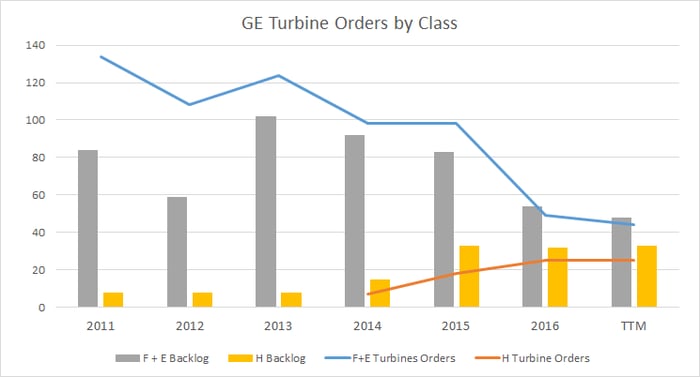 Third, GE equipment's gross margin was just 1% in 2016 -- compared to a historical run rate of around 5% -- and a key part of the plan to increase margin in the future involves cutting unit production costs on the newer programs such as the LEAP aircraft engine and the HA gas turbine. It's part of the reason why Barclay's analyst Scott Davis made GE his top stock pick. However, in order to take full advantage, GE will need to keep up the pace of HA orders.

Fourth, end-market demand isn't strong and GE is relying on HA orders to drive growth. Speaking on Siemens's recent earnings call, CFO Ralf Thomas described a fiercely competitive market and talked of continued pricing pressure. Moreover, GE CFO Jeff Bornstein said the company was "planning for a down market this year. We expect the power market to see demand for about 40 gigawatts of power this year, down about 10%."

It's probably more of a cyclical issue rather than a long-term structural problem, but there is little doubt GE's power segment has come under pressure.

Why it just got worse

Given the importance of the HA turbine to GE, the last thing the company needs to hear is that Siemens is upping its game. Unfortunately, that's exactly what's happening. On the recent third-quarter earnings call, Thomas acknowledged that Siemens needed to "catch up in turbine efficiency" and progress was being made in "developing the HL-class derived from Siemens' proven H-class technology." He went to argue that efficiency levels would improve significantly, saying, "The HL family is paving the way to the next generation of gas turbines entering into new performance levels north of 63%, with a clear roadmap to 65%."

Siemens is already taking action. In June, the company announced it would test and validate its HL-class turbine at a Duke Energy site. In its press release, Siemens noted that  it was expecting its HL-class turbines to start off with efficiency levels of 63% and eventually reach 65 percent. Furthermore, in August, Siemens announced it would be transferring "newly developed key technologies to its entire gas turbine portfolio" so all customers could see efficiency gains. 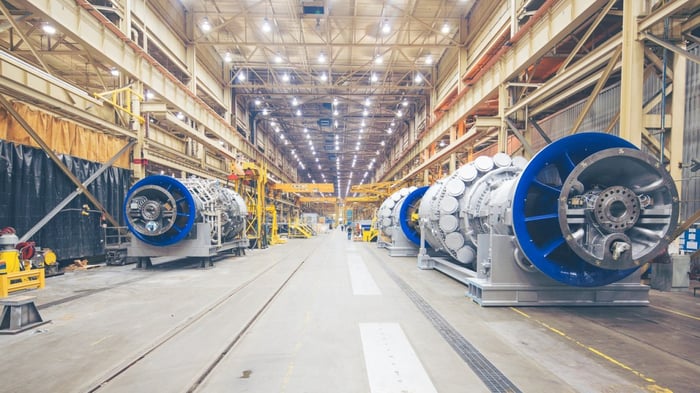 Small differences in turbine efficiency (the rate at which input energy is converted into output energy) matter to electricity generators because of the huge amount of energy produced -- GE claims the 9HA turbine produces enough electricity to power 400,000 homes.

Indeed, there are no prizes for guessing that GE's 9HA turbine broke the world record for efficiency in a combined cycle plant by recording 62.2% at an EDF plant in France in 2016. Moreover, GE's general manager of gas turbine products, Guy DeLeonardo, believes the current number "is closer to 64 percent net efficiency and that it could reach 65 percent by the early 2020s."

Bornstein told investors that management would share its views on the future of the power market sometime in November. Unfortunately, the initial indications are not good. Bornstein has already suggested the market might be down again next year while noting that GE had outperformed the competition.

It's obviously good that GE has outperformed Siemens in power, but if the latter is set to improve its H-class offering, it could spell trouble for GE, particularly if overall end demand is declining. In reality, the H-class has been the only growth area in the gas turbine market and GE has done well to take advantage, but that edge could be set to reduce in the future. Throw in weak end-market demand and life could get a lot tougher for GE's power segment.