It's been a difficult year for General Electric Company (NYSE:GE) investors as they have watched their stock decline 22% year to date while the S&P 500 is up by more than 8%. The decline is largely due to the company lowering expectations to the bottom end of its guidance ranges, amid disappointing performance from its oil and gas and power segments. While the oil and gas issue looks to be a case of expectations being set too high, the power segment's issues could be more troubling in the long term. In order to get more color on what's going on in GE's power segment, let's take a look at what its key rival Siemens AG (OTC:SIEGY) said in its recent results.

GE's second-quarter earnings report makes it clear that there are two issues:

Both issues were specifically addressed on Siemens' earnings call.

There is little doubt that the power market has weakened in the last year or so, as the following chart indicates. GE's gas turbine unit orders and Siemens' overall gas and power orders have both stagnated. 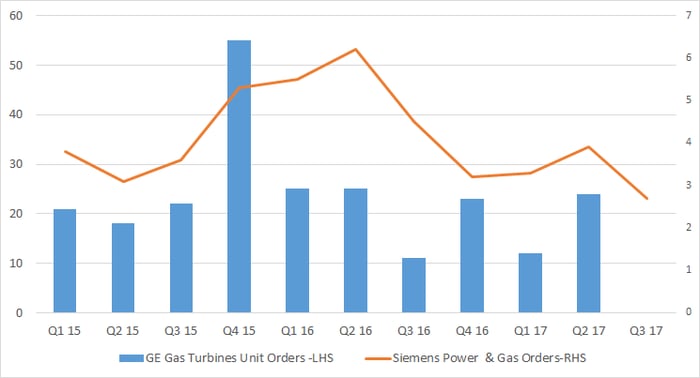 Thomas characterized a marketplace where "the fight for every single order is really fierce, and we see continued price pressure due to overcapacities," and he went on to outline that current "market conditions will not go away anytime soon. And also the overcapacities, that we see our competitor struggling with, is something that we expect to continue for more than 1 or 2 quarters."

This is not good news for GE -- which Thomas was probably referring to when he mentioned a competitor in the quote above. Moreover, GE may face more competition in the future as Thomas highlighted the development of Siemens' HL-class turbines -- derived from the company's existing H-class turbine. The HL-class turbine is intended to fight against GE's highly successful H-class turbine, and is possibly what Bornstein had in mind when he talked about new-product introductions to come in the industry.

With regard to power services -- the area of power that GE's management specifically highlighted as being weaker than expected in 2017 -- Redburn Limited analyst James Moore asked Siemens management how service revenue growth was developing.

In fairness, the response contained positive and negative elements. On the plus side, Siemens CEO Joe Kaeser said power services revenue would be "robust" for the "foreseeable future" -- a time frame he specified as the next 12 to 18 months -- a somewhat more positive outlook than GE's management gave.l 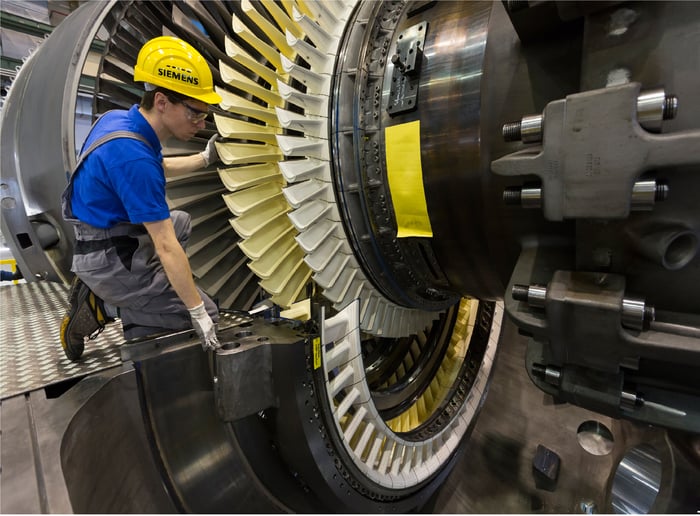 On a more negative note, Kaeser outlined that customers' business models could change in the future, and his "foreseeable future" outlook was based on "customers' demand and how we deal with our customers." In other words, it's more a reflection of current conditions than a call on the future of the industry.

That said, Siemens' commentary on power services is notably more positive than GE's, so perhaps the German conglomerate is guilty of being too optimistic with regard to expectations.

All told, Siemens' earnings and commentary don't provide a positive read across for GE's power segment. The end-market weakness is frustrating for GE investors because the development of its H-class turbine and the industry consolidation inherent in GE's purchase of Alstom's energy assets are good moves in an industry suffering with low end-market growth and overcapacity.

While the long-term picture is far from clear -- things like the rising adoption of electric vehicles are surely a net plus for electricity generation -- the near-term outlook is tough enough to warrant concern for prospects at GE's power segment.