Please ensure Javascript is enabled for purposes of website accessibility
Log In Help Join The Motley Fool
Free Article Join Over 1 Million Premium Members And Get More In-Depth Stock Guidance and Research
By Evan Niu, CFA - May 22, 2018 at 9:00AM

YouTube is known for free music. Can it change that perception with consumers?

Announced earlier this month, Alphabet (GOOG -0.27%) (GOOGL -0.21%) subsidiary Google is launching its new YouTube Music service today. In doing so, YouTube is hoping to capitalize on its position as one of the top destinations for music content, albeit more directly.

There will be a free version of YouTube Music that is supported by ads, as well as a YouTube Music Premium tier at the same $10-per-month price point that's standard for similar services. The company is essentially splitting up its current YouTube Red offering into a premium video service and a premium music service. The video component will simply be YouTube Premium.

Do Spotify Technology (SPOT 3.93%) and Apple (AAPL 1.62%) -- which command about 115 million premium subscribers combined -- have anything to worry about? Probably not.

Stop me if you've heard this one before

Google has a bad reputation of offering numerous overlapping services, confusing consumers in the process. Messaging is easily the worst offender, but the same is true for music.

YouTube Red had included a music-streaming component, and the company currently still offers Google Play Music, although recent rumors suggested it would be killed off this year as Google consolidated under YouTube Music Premium. Google appears to be paving the way for combining the services, with some features shared between them.

Record execs have always hated YouTube because of its payouts

Outgoing Apple Music chief Jimmy Iovine hasn't pulled any punches when discussing YouTube. Free alternatives to paid music streaming are a huge threat to the industry, with YouTube being the most popular by far. But don't just take Iovine's word for it.

The Recording Industry Association of America (RIAA) put out some estimates about a year ago for 2016 payout rates, and it's perfectly clear which service the record labels would prefer thrive. 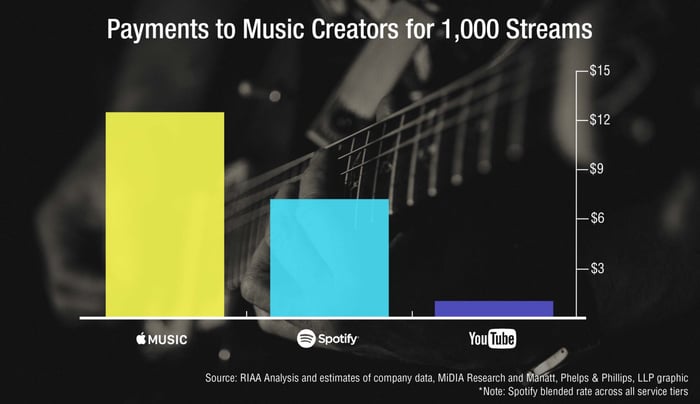 Of course, YouTube's ability to pay royalties hinges on its ability to monetize users. If it can grow a premium subscriber base, it could then pay better royalties to artists. The challenge there is that consumers have historically associated YouTube with free content, and that's an association that's hard to break.

If you can't beat 'em, rebrand in a couple years

Apple and Spotify have both gained critical mass at this point. Spotify leads the streaming revolution, with 75 million premium subscribers, and its content discovery algorithms are unrivaled. Apple Music recently hit 40 million paid subscribers, and the Mac maker has a storied history defending the industry's economics. It's clear that Apple Music is one of the strategic pillars for Apple's big push to grow its services business.

Google's penchant for experimentation doesn't do it any favors here, as the constant shifts are jarring for consumers and only serve to dilute its brand strength. YouTube Music will likely end up being another "me, too" service -- at least until Google rebrands it yet again in a couple years.