Who will lead the No. 2 music-streaming service now?

There was a bit of confusion earlier this year regarding the fate of Apple (AAPL 2.14%) exec Jimmy Iovine, who runs the company's all-important music-streaming service. Rumors surfaced in January that Iovine was planning on leaving the company in August, after the last tranche of the Apple shares he received from the Beats acquisition vests. Within days, Iovine shot back, flatly denying the rumors, almost offended by the idea. "I am in the band," Iovine reassured everyone.

The Wall Street Journal is reporting today that Iovine is indeed planning on leaving the Mac maker, after transitioning to a "consulting role" in August and backing away from daily operations. 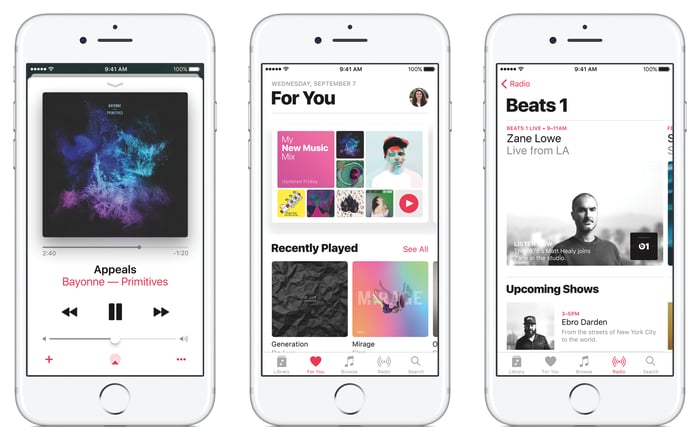 Iovine is on his way out

Iovine is one of the last remaining holdouts from Beats, as most other Beats execs have since left Apple following the 2014 acquisition. It sounds like Iovine wasn't a great cultural fit at Apple, whose corporate culture differs from the "edgy" one that Iovine had helped create at Beats, according to the report.

Apple Music's original video content strategy is largely attributable to Iovine, and that strategy has not only perplexed investors but also failed to impress critics. Furthermore, it's highly unlikely that any customers signed up for Apple Music in order to have access to that video content. However, Iovine has been instrumental with maintaining relationships within the music industry, given his decades of experience and deep ties.

Three other Apple Music executives have taken over daily leadership responsibilities, reporting to services chief Eddy Cue. It's not clear if any of these executives will be promoted to lead the service or if Apple will hire an outsider for the position. Iovine is said to want more time with his family, in line with his prior comments that he is approaching an age where he will be "slowing down." Iovine is nearly 65 years old.

This all comes as larger rival Spotify is preparing to go public on April 3 via a direct listing of its shares. The iPhone maker continues to trail the Swedish music-streaming leader, maintaining about half as many paid subscribers at any given time. Apple confirmed earlier this month that Apple Music now has 38 million paid subscribers, compared to Spotify's 71 million.

Investors are excited to finally get their hands on Spotify shares. Considering Spotify's imminent debut and the industry's ongoing shift to subscription access models, the music-streaming space is about to get an awful lot more public attention. Now more than ever, Apple Music is going to need strong leadership.