Investors looking for exposure to the mining sector and a decent dividend yield will have to look at stocks based overseas. Anglo-Australian mining companies BHP Billiton Limited and Rio Tinto PLC and Brazil's Vale S.A. are listed in the U.S., and they all sport a dividend above 4%, while U.K. listed copper miner Antofagasta PLC isn't far behind, with a yield of around 3.8%.

Here's a look at why the sector is worth investing in, and which stocks are best placed for income seekers. 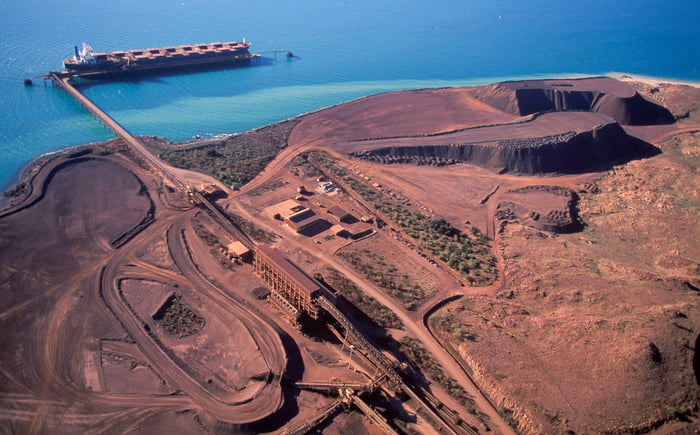 What happened to mining and industrial metals stocks in recent years

Economies tend to move in cycles, and the metals and mining sector is no different. As you can see below, mining and industrial metals prices have tended to move in step with growth in China's gross domestic product during the last couple of decades; the slowdown in China growth in recent years has negatively impacted prices. Throw in the recession in U.S. industrial production in 2015-2016, and 2012-2016 proved to be a very difficult period for mining and heavy industries in general. 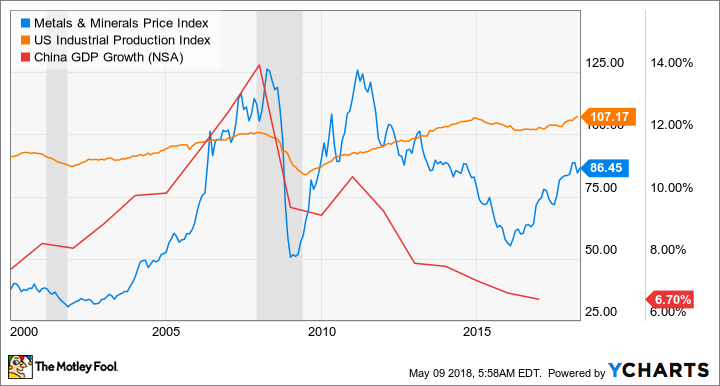 Indeed, the chart below shows how all the companies featured suffered revenue declines between 2012 and 2016 period. However, conditions started improving in 2016, as the rate of the slowdown in China GDP growth started to moderate and U.S. industrial production came out of recession (see first chart above). 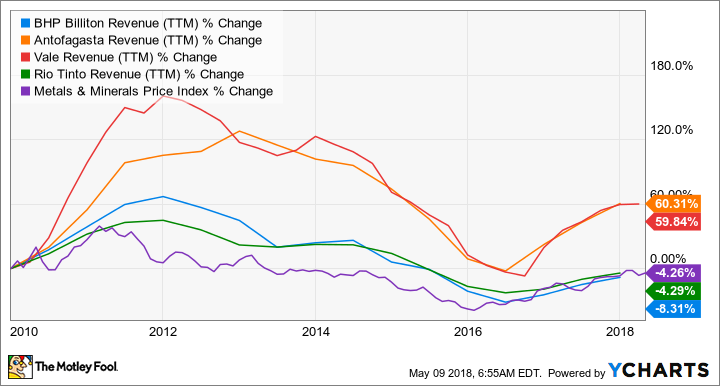 The case for buying dividend-paying mining and industrial metals stocks

To put China's importance in context: According to the World Steel Association, demand for steel (the main use of iron ore) from the country was 737 million tonnes in 2017, compared to 411 million for all developed countries, and 851 million for the world excluding China.

The 2000-2008 boom in commodities prices isn't likely to be repeated -- the Metals & Minerals Price Index (a weighted average of aluminum, copper, iron ore, lead, nickel, tin, and zinc prices) increased a whopping 178% from 2000 to 2008. However, income-seeking investors are likely to be happy with inflation-busting growth in their stock's dividends provided they start by buying the stock with a dividend yield of around, say 4%.

For reference, BHP Billiton (iron ore, copper, coal, and petroleum) and Rio Tinto (iron ore, aluminum, copper, and coal) have exposure to a range of commodities, while more than 70% of Vale's revenue comes from iron ore, and Antofagasta is a pure play in copper.

Which stock is the best to buy?

Aside from growth, the two most important things dividend investors are looking for are dividend yield, and the dividend payout -- in this case, dividends paid as a percentage of free cash flow (FCF). A low payout implies the company can increase its dividend in the future.

As with all cyclical companies, it's a good idea to look at performance across a cycle, rather than just pick outperformance in a peak or a trough year. The chart below includes the 10-year average dividend-to-FCF ratio; a low ratio is good, as it implies a well-covered dividend. In addition, it's a good idea to buy a cyclical company with a low debt-to-equity ratio, as holding stock in companies overloaded with debt when the cycle turns against them is obviously bad news.

While all these companies have cut their dividend in recent years -- in response to the impact of slumping mining commodity prices on earnings -- it's clear that Rio Tinto has performed relatively better than the others in terms of maintaining dividend payments. 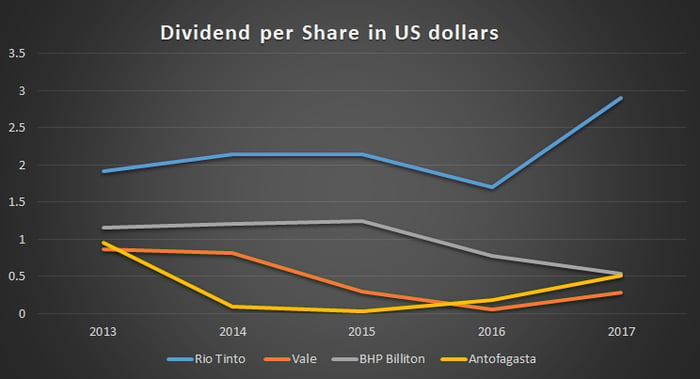 Rio Tinto is the clear winner

Based on this analysis Rio Tinto is the best mining stock, at least for dividend investors. It offers the highest yield, and its current dividend is well covered by free cash flow. Moreover, it has the best dividend-to-FCF performance over the cycle, and its debt-to-equity ratio is lower than Vale's and BHP Billiton's.

That said, copper play Antofagasta could be another useful option. Copper is an interesting metal because of its wide-ranging usage across industrial applications. Moreover, it has good growth prospects from such things as wiring for China's electricity network and the extra wiring needed in electric vehicles. In other words, if you are convinced of the global economy's long-term growth prospects and want to avoid the political risk of tariffs on steel and aluminum, then copper and Antofagasta could be the way to go. Otherwise, Rio Tinto looks like the best stock for dividend investors in the mining sector.