Please ensure Javascript is enabled for purposes of website accessibility
Log In Help Join The Motley Fool
Free Article Join Over 1 Million Premium Members And Get More In-Depth Stock Guidance and Research
By Evan Niu, CFA - Updated May 25, 2018 at 1:54PM

The Mac maker is partnering with VW for self-driving employee shuttles.

It's been a while since investors have heard anything regarding Apple's (AAPL 2.45%) autonomous driving ambitions, known as Project Titan. Since the project's inception, Apple has changed gears numerous times, including deciding about a year and a half ago that actually manufacturing a car was too tall of an order to fill. Manufacturing dominates the operations of all auto companies, and Apple outsourced production of its own devices long ago. CEO Tim Cook has since acknowledged that the company is now "focusing on autonomous systems" and has been prototyping modular roof-mounted lidar systems.

The Mac maker has now reportedly tapped a new partner for a new direction. 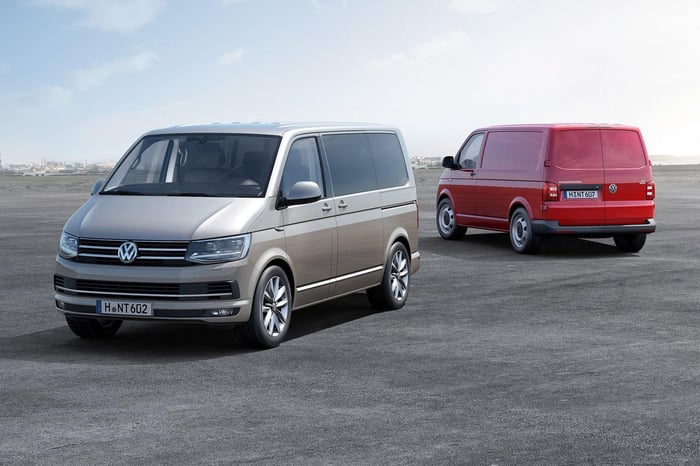 A self-driving shuttle for employees

The New York Times reports that Apple has inked a new partnership with Volkswagen (VWAGY 2.75%), after negotiations fell through with other luxury carmakers like BMW and Daimler's Mercedes-Benz. Apple was unable to secure deals with other automakers due to disagreements over who would own and effectively control the user experience and relationship, which also includes the resulting user data that is generated.

Apple is now looking to develop a self-driving shuttle that could be used to transport employees, built using VW's commercial T6 Transporter vans, which aren't sold in the U.S. The effort is already behind schedule, with the company's entire car team working on it, according to the report. The iPhone maker is using the T6 Transporter frame, wheels, and chassis, but Apple is customizing other parts of the electric vans, such as the interior and battery. Apple still needs to get the autonomous driving software right first before deploying it on these vehicles.

The report includes some fresh details about how Project Titan has evolved over the years, as well as Apple's strategic thinking. It echoes how Apple did initially have manufacturing ambitions before realizing just how difficult auto manufacturing can be. It then wanted incumbent automakers to manufacture a vehicle that was designed by Apple, but then thought maybe it could develop a car on top of a third-party chassis. Most recently, Apple is interested in retrofitting its own suite of sensors onto existing vehicles, which could help explain those aforementioned modular systems.

Apple had even developed some prototype cabins that had passengers facing each other, an idea that other automakers have explored as well for autonomous concept cars.

The new partnership sounds similar to one that Alphabet (GOOG 5.20%) (GOOGL 5.11%) subsidiary Waymo inked with Fiat Chrysler a while back, which was just recently extended, with Waymo agreeing to purchase "thousands" more Pacifica hybrid minivans. One of the most practical applications for autonomous cars will be shuttling larger groups of people, which is why some companies are focusing on minivan form factors.

As tumultuous as Apple's automotive ambitions have been (and continue to be), the company isn't giving up quite yet. After all, Cook considers autonomous driving to be a "core technology" that it views "as very important." The company has the resources to pursue developing such technologies, even without a clear go-to-market strategy.