Shares of tractor maker Deere & Company (NYSE:DE) are up 27.5% over the past 12 months, doubling the performance of the S&P 500 already -- and the good news has only just begun, according to one industrials analyst.

Predicting that higher grain prices will yield more money for farmers to spend on tractors, and that this will boost Deere's business, Swiss megabank UBS announced this morning that it is upgrading shares of Deere & Co. to buy and assigning the stock a $185 price target. 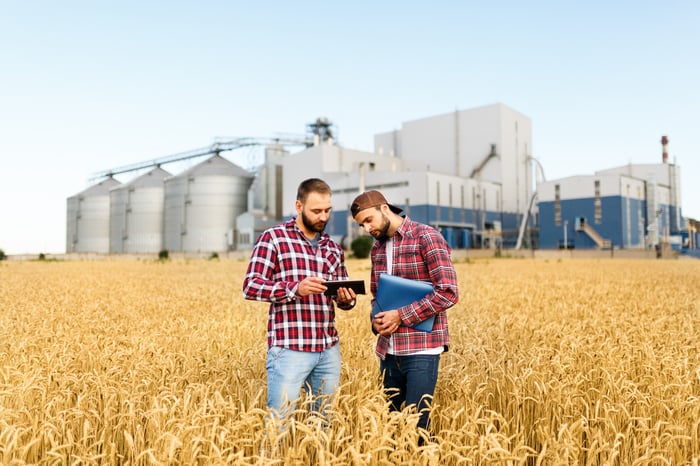 UBS' buy thesis for Deere hinges on one big assumption: That grain prices are headed higher, TheFly.com reports this morning. "[G]rain prices ... have a favorable setup entering the growing season," according to the analyst, and are headed higher. And because higher grain prices put more money in farmers' pockets, this "will stimulate a recovery in North America high-horsepower tractors, which ... have been declining for five years."

UBS says this recovery has been slow in coming so far, but "could accelerate in fiscal 2019." So how likely is that?

Along with the non-food crops of cotton and hay, corn, wheat, and soy account for 90% of all acreage planted in the U.S. Among edible grains, corn, wheat, and soy are arguably America's three most important grain crops -- and after a rough couple of years, the prices of all three have finally started going up again. 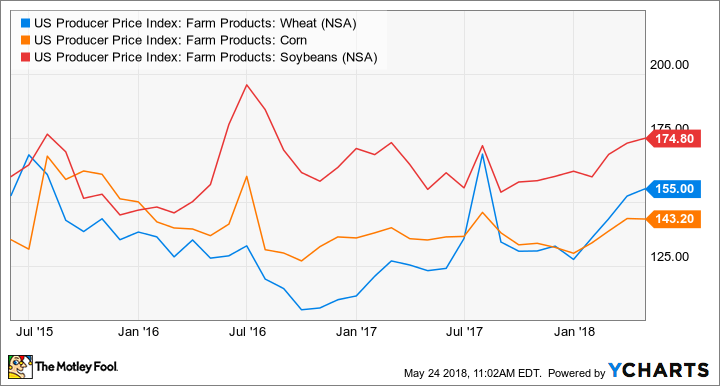 FarmFutures.com reports that July futures contracts for corn hit their "highest levels since the summer of 2016" due to wet weather having delayed the planting season in the Midwest. Soybean prices, too, are on the rise, spurred by hopes that China will soon resume purchases of U.S. soy. And wheat prices are also rising, thanks to forecasts for dry weather that could depress yields in the Plains states, Australia, Canada, and Russia.

So it appears conditions are propitious for price hikes, higher farm incomes, and more spending on the tractors and combines that Deere produces.

What it means for Deere

That makes logical sense, but does it mean Deere stock is a buy, as UBS argues it is? Not necessarily. As you can see in the below chart, Deere's stock price doesn't strictly track the price of major grains in the U.S. -- holding steady in late 2015/early 2016 for example, when grain prices were falling, and rising in late 2016/early 2017 when grain prices were...also falling! 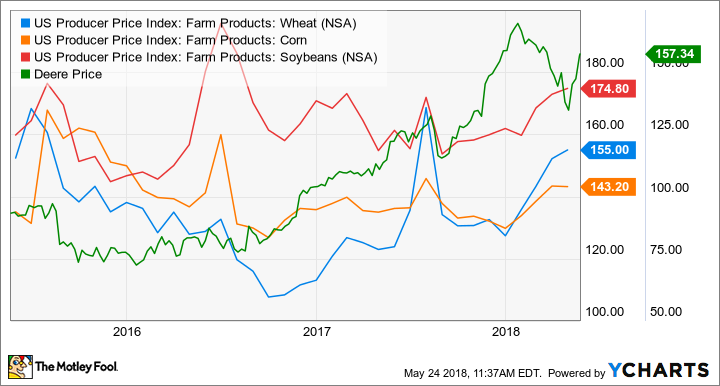 True, Deere stock performed well mid-2017 when all three major grain crops enjoyed a spike in price, and we seem to see that happening again this month. Still, investors can't rely on Deere's run will continuing given the stock's connection to grain price trends has been so tenuous in the past.

I'm inclined to think investors would be better off spending more time focusing on whether Deere's stock price looks like a good value, rather than reading the ag reports, to determine if Deere stock is a buy or not. In that regard, I have to say that with a price-to-earnings ratio of 28 and a long-term projected earnings growth rate of 5% (according to analysts surveyed by S&P Global Market Intelligence), Deere stock is in fact not a particularly compelling buy at today's prices. And if pressed, I might even point out that Deere is currently running free-cash-flow negative on its business, as it has done for more than a year now -- which is hardly a point in the stock's favor.

Long story short, while I certainly understand why recent trends in grain prices might make UBS feel optimistic about Deere stock, I don't share the optimism. As any farmer knows, crop health can change in a hurry -- and the rally in Deere's stock price could wither just as fast.