Please ensure Javascript is enabled for purposes of website accessibility
Log In Help Join The Motley Fool
Free Article Join Over 1 Million Premium Members And Get More In-Depth Stock Guidance and Research
By Jamal Carnette, CFA – May 25, 2018 at 6:35AM

The bottom-line miss may be an opportunity for value investors.

Target (TGT -0.23%) stock seemed to be finally turning a corner. After years of pressure from e-commerce giant Amazon and Walmart's digital reinvention, shares were significantly trailing the greater S&P 500 and posting a 5-year loss. Over the last year, however, shares have rallied in response to management's plans to reinvigorate the brand's shopping experience and improve its online shopping channel.

Unfortunately, the company's first-quarter earnings put a halt to that rally. Target had a mixed report, outperforming on the top line with $16.8 billion in revenue but missing on the bottom line with adjusted earnings per share of $1.32 versus the analyst consensus of $1.39. Looking beyond the headline numbers, there are signs of improvement: Same-store sales increased by 3% during the quarter, and digital sales increased 28%, a higher clip than the 21% growth rate in the year-ago period.

Still, shares are down 6% this week. Is this a good time for value investors to establish a position? 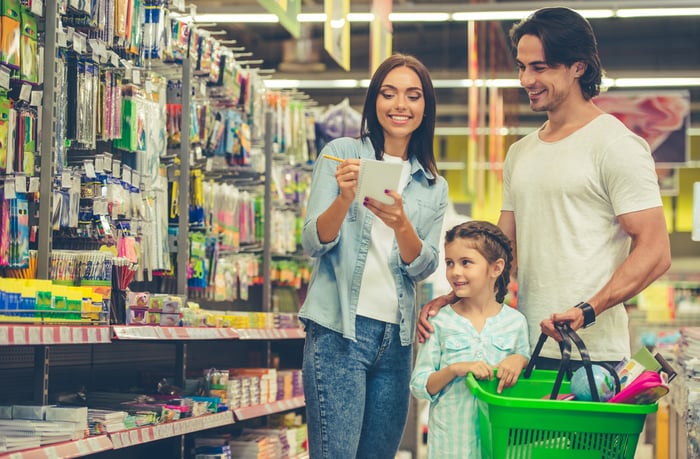 Margin erosion is real, and digital is a factor

Investors' largest concern was Target's margin erosion and its effects on profitability. Although Target's 29.8% gross margin was similar to the prior-year's 30% figure, down-line operating expenses like salaries and benefits increased more than expected, dragging operating margin down nearly a full percentage point -- from 7.1% last year to 6.2%. A certain amount of margin erosion was expected: In November the company raised starting salaries to better compete with Walmart, but the figure was higher than Wall Street's expectations.

While Target's digital growth should be welcomed, it also comes at a cost: reduced profitability. Management noted investments in digital operations and fulfillment and sales mix as contributors to the 90-basis point operating margin decline. The trade-off is that digital growth was a large factor in sales and traffic increases: The former increased 3.7% last quarter, the highest rate in a decade. Investors should continue to monitor how effectively Target balances digital growth with margin preservation, especially in light of higher labor costs.

Margin concerns aside, the company outperformed on the top line, and it appears the company's $7 billion in investments are finally powering a turnaround. Even more encouraging is the 3.7% traffic increase with narrower gross-margin compression, which means Target's expense inflation is mostly labor-cost related and more easily managed by the company than product or third-party costs would be.

The death of retail has been exaggerated. Larger operators like Target will continue to exist and thrive, provided they can improve their digital channels and provide seamless shopping experiences.