Some 16,000 near-Earth asteroids orbit the Sun, containing an estimated 2 trillion metric tons of water -- and no, this is not an article about the movie Armageddon.

For the mathematically  inclined, a metric ton contains just over 2,200 pounds, or 264 gallons of water. So 2 million metric tons equal roughly 528 trillion gallons, or more than 4.4 quadrillion pounds of water.

Now, it costs NASA on average $10,000 to lift a pound of water into orbit -- whether in the form of water for drinking, or as constituent hydrogen and oxygen atoms rearranged for use as rocket fuel. Thus, the economic value of the water alone contained in near-Earth asteroids -- not even considering the tons of valuable metals they may also contain --  works out to ... better sit down for this ... 44 quintillion dollars.

And Planetary Resources wants to mine it. 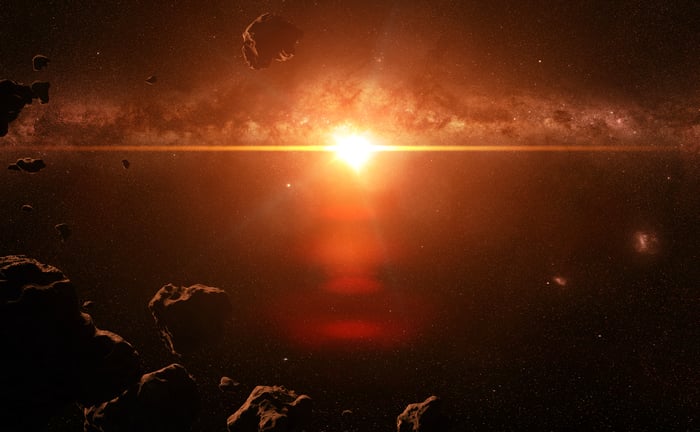 There's a great big solar system out there -- so let's mine it! Image source: Getty Images.

What is Planetary Resources?

Planetary Resources, if you haven't heard of it, is a pioneering space company. It was founded by entrepreneurs Peter Diamandis (of Xprize fame) and Eric Anderson (also famed for  negotiating deals with Russia to send private citizens to the International Space Station on space tourism trips). It's backed by Google veterans Larry Page and Eric Schmidt. The company recently helped convince the nation of Luxembourg to pass a law legalizing the mining of asteroids. It's also quite possibly going to be the first company to actually mine an asteroid for valuable resources such as space water.

Last month, Planetary Resources took a big step toward that goal when it launched its Arkyd-6 spacecraft to test technologies that could be used in asteroid mining. Among these technologies is a new mid-wavelength infrared (MWIR) imager to detect water and other resources on asteroids, identifying promising prospects for space mining.

Arkyd-6 was Planetary Resources' second foray into space, following the successful deployment of an Arkyd 3 Reflight (A3R) satellite from the International Space Station in 2015. It will be followed, in 2020, by the launch of several more solar-powered spacecraft of the Arkyd-301 class. Each of these spacecraft will target a separate near-Earth asteroid to prospect for water and valuable minerals.

Initially, each spacecraft will scan its targeted asteroid for "locations of interest," utilizing the MWIR being tested about Arkyd-6. Then, they will deploy probes to land on the asteroids and take samples to confirm the presence of water. These probes will transmit their findings back to the spacecraft, which will in turn relay the information to Planetary Resources back on Earth.

That's when the fun starts.

Once water has been found on near-Earth asteroids, Planetary Resources will try to build a business mining that water. It will build more and bigger spaceships, and dispatch them to the asteroid belt to begin mining operations. It will sell this water to NASA, to the Russians, to commercial space exploration firms -- probably to anyone with money to pay for it -- for use as fuel (and, well, as water). In so doing, it will relieve these entities of the need to "import" water from Earth into space -- at the aforementioned cost of $10,000 a pound. The water will already be up there, for sale at whatever price the market will bear.

How high will that price be? How much money could Planetary Resources eventually make from mining it? That's hard to say.

Even Planetary Resources admits that no one knows for sure how big the space market might become once there's an infrastructure to allow low-cost access to water for fuel in space. But the company really wants to find out.

Planetary Resources argues that mining water in space, for use in space, is 1,000 times more economically efficient than launching water from Earth for use in space. Such a decrease in cost is certain to ease access to space. This will very likely increase commercial interest in space exploration, growing the market far beyond Planetary Resources alone, and creating the conditions for an entire new space industry to emerge.

I, for one, cannot wait to invest in it.