There has been a wave of acquisitions among Canadian marijuana growers so far in 2018. The most recent -- and biggest -- is Aurora Cannabis' (NASDAQ:ACB) planned buyout of MedReleaf. But will the acquisition fever cool off? Don't count on it.

It wouldn't be surprising at all if the anticipated legalization of recreational marijuana in Canada spurs even more deals. I think there are three marijuana stocks that could be at the top of the list for potentially being gobbled up next. Here's what makes Organigram Holdings (NASDAQ:OGI), Aphria (NASDAQOTH: APHQF), and The Green Organic Dutchman (OTC:TGOD.F) especially attractive. 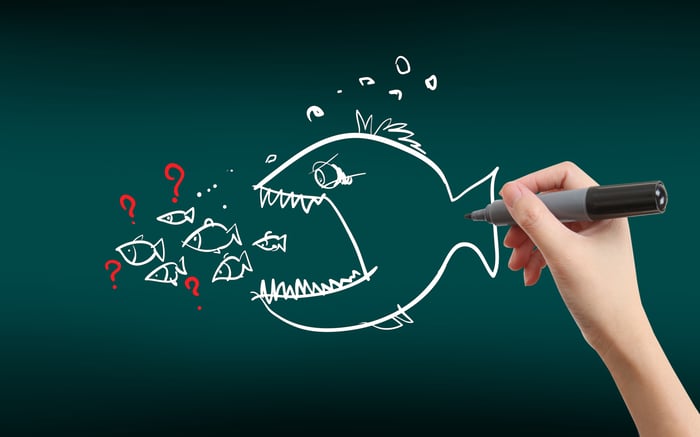 It's a tough call as to which marijuana stock is the most likely to be acquired later this year. If I had to pick just one, though, my money would be on Organigram.

My colleague Sean Williams calls Organigram "the only marijuana value stock." Whether or not you agree with Sean's label, he's spot on about Organigram's valuation relative to most other marijuana stocks on the market. Organigram's market is currently around $483 million. The company projects annual production capacity of 113,000 kilograms within the next two years. That translates to roughly $4,274 per kilogram -- probably the best bang for the buck you'll find among Canadian marijuana growers.

It's also a nice plus that Organigram is profitable. The company reported earnings of CA$1.1 million on record-high sales of CA$3.2 million in the first quarter.

Buying Organigram would also give the acquirer more international exposure. Organigram announced a deal earlier this month to buy up to a 25% stake in alpha-cannabis Pharma GmbH, also known as Alpha-Cannabis Germany (ACG). The company provides medical cannabis in Germany and other European markets. In addition, Organigram received approval a few days ago to begin exporting medical cannabis to Australia.

Aphria ranks as one of the larger Canadian marijuana growers with a market cap of around $2 billion. It's possible that Aphria could be a buyer rather than a seller. That's been the case so far. Aphria wrapped up two key acquisitions of Broken Coast Cannabis and Nuuvera earlier this year.

However, I think Aurora's acquisition of MedReleaf could prompt Canada's biggest marijuana grower, Canopy Growth (NASDAQ:CGC), to take a look at Aphria. My view is that this combination could make sense for several reasons. It would strengthen Canopy's position in Germany. More importantly, acquiring Aphria should significantly improve Canopy's economies of scale.

Aphria is on track to produce 225,000 kilograms of cannabis annually by early 2019. That would be a quick boost of capacity to Canopy. Like Organigram, Aphria is also profitable. The company reported its 10th consecutive quarter of positive adjusted EBITDA in its fiscal Q3 results, with all-time high earnings of CA$12.9 million and revenue of CA$10.3 million.

I ranked Aphria behind Organigram for one primary reason: Canopy might be the only potential suitor. I doubt that Aurora would make another big deal on the heels of the MedReleaf acquisition. If Canopy isn't interested, Aphria could opt to grow larger through its own acquisitions.

I view The Green Organic Dutchman (TGOD) as another potential acquisition candidate. However, my hunch is that TGOD is in a distant third place.

The company recently completed the biggest initial public offering (IPO) ever for a marijuana stock. That's the good news. The bad news is that IPO was so successful that TGOD now sports a market cap of around $700 million. Why is that bad? TGOD's projected annual production capacity of 116,000 kilograms by 2019 Q2 is only slightly higher than Organigram's projected capacity, but TGOD is a lot more expensive.

Also, like Aphria, TGOD's field of potential buyers could be limited to just one company. Aurora already owns a sizable minority stake in the company and has an agreement with TGOD to buy 20% of its annual production at wholesale prices. If Aurora isn't interested in acquiring TGOD after its big deals already made this year, there might not be any other takers.

On the other hand, if global demand for medical marijuana and Canadian demand for recreational marijuana are even greater than anticipated, larger marijuana growers will look for avenues to quickly ramp up supply. TGOD's relationship with Aurora would make it a top acquisition candidate in that scenario.

My view is that TGOD is too pricey after its tremendous IPO. However, I like both Organigram and Aphria. Granted, if supply outstrips demand after Canada legalizes recreational marijuana all bets are off.

I think there could be temporary supply demand imbalances at some point, but I also feel that the global medical marijuana market presents the biggest growth opportunity for Organigram and Aphria. My take is that both companies will capitalize on that opportunity -- if they're not gobbled up first.