Please ensure Javascript is enabled for purposes of website accessibility
Log In Help Join The Motley Fool
Free Article Join Over 1 Million Premium Members And Get More In-Depth Stock Guidance and Research
By Keith Speights - May 16, 2018 at 6:01AM

Aurora Cannabis is buying MedReleaf in the biggest marijuana acquisition ever. But here's why investors aren't overly excited.

Up until this week, the biggest marijuana stock deal of all time was Aurora Cannabis' (ACB 2.27%) acquisition of CanniMed Therapeutics earlier this year for $852 million. Now, though, another Aurora transaction is taking the No. 1 spot.

On Monday, Aurora announced it is acquiring MedReleaf (NASDAQOTH: MEDFF) in a deal valued at close to $2.5 billion (around 3.2 billion in Canadian dollars). The news came a little over a week after the two marijuana growers announced that they were in discussions about what MedReleaf referred to in a press release as "various alternatives."

What was the market's reaction to the biggest marijuana stock merger in history? A big yawn. While MedReleaf stock understandably enjoyed a nice bump, Aurora Cannabis' share price didn't change very much on news of a deal that could make it the biggest marijuana stock on the planet. Here are three reasons the market's response to the Aurora acquisition of MedReleaf was so subdued. 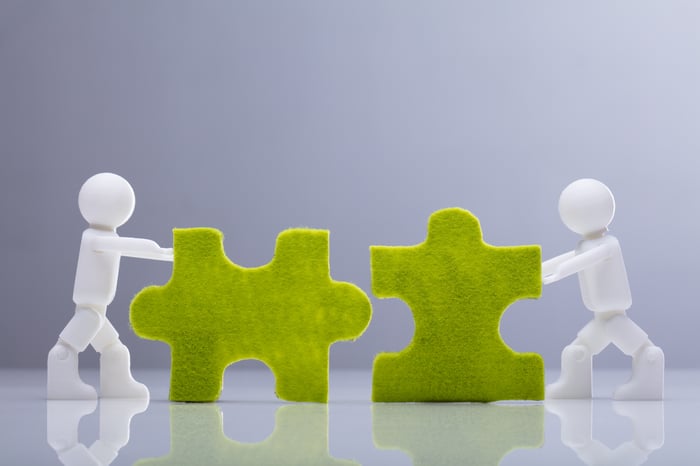 One key reason investors didn't bid up the share price of Aurora is that they know what's coming. This will be an all-stock transaction. And all the stock for the deal will come from issuing more Aurora Cannabis shares -- a lot of them.

2. Concerns about the price tag

If investors thought Aurora Cannabis was getting a great bargain in buying MedReleaf, we probably would have seen Aurora stock move higher. That didn't happen. I suspect it's at least in part due to concerns about the price tag of the transaction.

Aurora is paying a premium of 34% above MedReleaf's 20-day volume-weighted average price. This level of premium isn't ridiculously high, though. Aurora ended up paying a premium of 181% above the closing price of CanniMed prior to the announcement of its unsolicited bid for the smaller company. But MedReleaf isn't a bargain for Aurora.

3. Uncertainties about the marijuana market

There's no way to know for sure how much uncertainties about the marijuana market weighed on investors' minds in the wake of the news about Aurora buying MedReleaf. My guess, though, is that this had some impact in the muted reaction to the deal.

Canada is on the verge of potentially legalizing recreational marijuana, opening up a big new market for Aurora Cannabis and its peers. Medical marijuana markets are also expanding across the world, particularly in Germany. So, why would investors be nervous?

One factor is that valuations of marijuana stocks already price in expectations of tremendous growth. However, it's quite clear that the rapid expansion of production capacity by marijuana growers will far exceed even the rosiest projections of demand in the Canadian market.

Aurora Cannabis has expanded its capacity very aggressively. The company was already making a huge bet that supply won't outstrip demand with international markets added to the domestic Canadian market. An acquisition of MedReleaf makes that bet even bigger.

Is the acquisition of MedReleaf a good deal for Aurora? I think the market's reaction is probably the right one.

When news first broke about the two companies talking about a potential transaction, my thought was that it made sense in concept. A combination of Aurora and MedReleaf will provide greater economies of scale. Assuming projections for the Canadian recreational marijuana market and for international medical marijuana markets aren't too far off, companies with greater capacity should benefit tremendously.

On the other hand, the hard math of this particular deal is that more dilution is on the way for Aurora shareholders. The price for the acquisition isn't cheap. There's one thing you can say for Aurora Cannabis' executives, though: They're not afraid to go big.