Please ensure Javascript is enabled for purposes of website accessibility
Free Article Join Over 1 Million Premium Members And Get More In-Depth Stock Guidance and Research
By Keith Speights - May 6, 2018 at 9:41AM

No. 2 plus No. 3 could result in No. 1 in the Canadian marijuana industry.

Is another major marijuana merger on the way?

There have already been several big mergers and acquisitions among Canadian marijuana growers over the last couple of years. The biggest deal so far was Aurora Cannabis' ( ACB -0.31% ) once-hostile but later friendly takeover of CanniMed Therapeutics. Now it seems that Aurora might be itching for an even bigger deal.

This time, the potential target is MedReleaf (NASDAQOTH: MEDFF). With a current market cap of $1.75 billion, MedReleaf ranks as the third-biggest Canadian marijuana grower behind Canopy Growth ( CGC -3.16% ) and Aurora. If Aurora acquires MedReleaf, it would immediately jump to the top. But is a deal really likely? 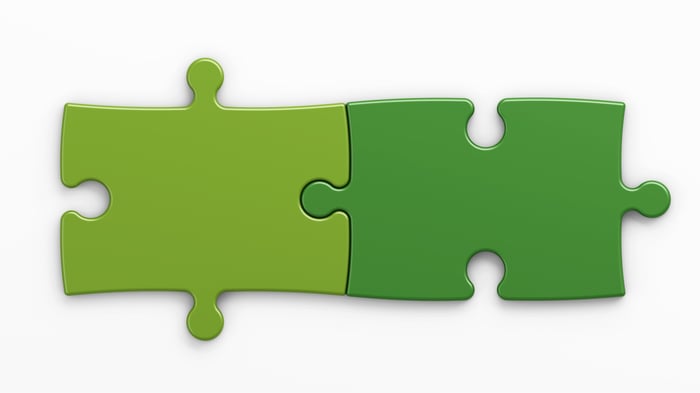 What the companies are saying -- and not saying

On Wednesday, Canadian newspaper The Globe and Mail reported that MedReleaf was looking for a potential buyer -- and that Aurora was interested. Investors got so worked up about the possibility of a deal the next day that the Investment Industry Regulatory Organization of Canada (IIROC) halted trading of both marijuana stocks on Thursday due to unusually high trading levels.

Aurora Cannabis and MedReleaf released statements later in the day on Thursday. Aurora said that it "does confirm that it engages in discussions with industry participants from time to time, including MedReleaf." However, the company also added that at this point, "there is no agreement, understanding or arrangement with respect to any transaction with MedReleaf."

MedReleaf was on the same page as Aurora. The company's press release on the potential acquisition stated that MedReleaf "engages from time to time in discussions with other industry players, including Aurora Cannabis, regarding various alternatives." As with Aurora's public statement, MedReleaf's announcement said the company "has not entered into an agreement to effect any particular transaction," adding that "there can be no assurance that such discussions will result in any such agreement."

Although the two statements were similarly worded, MedReleaf's announcement confirmed that the earlier rumors were true. The two companies are indeed discussing "various alternatives," which almost certainly includes an acquisition of MedReleaf by Aurora Cannabis. However, both Aurora and MedReleaf were clear that no deal has been finalized yet.

Does a deal make sense?

There are no details to analyze yet, so it's premature to say if an acquisition of MedReleaf by Aurora Cannabis would be good for the two companies' shareholders. However, I think that the idea of combining the two companies is generally a good one.

If we were just looking at the Canadian marijuana market, it would be a different story. Although most marijuana growers have been cranking up production capacity in anticipation of the legalization of recreational marijuana later this year, it appears that there could more supply than demand in the Canadian market.

But Canada isn't the only country with a growing marijuana market. At least 22 other countries have legalized medical marijuana, including Germany. Worries about a supply glut are overblown if these international markets reach their potential.

Aurora's management team talked in April about a potential $37 billion marijuana market in Europe, with a market of up to $110 billion annually in the rest of the world. I suspect those estimates are overly optimistic, but even if the market potential is only half that size, increasing capacity makes sense for the company. Buying MedReleaf would be a quick way of boosting production capacity.

However, if Aurora does acquire MedReleaf, it would likely mean some pain for investors. Aurora issued 69.3 million new shares and paid $134 million (in Canadian dollars) to buy CanniMed. MedReleaf is around three times bigger than CanniMed. It seems likely that Aurora would need to not only issue more shares but also take on additional debt to fund a buyout of MedReleaf. Again, though, it depends on the details of any deal that could be forthcoming.

It remains to be seen if Aurora Cannabis actually does buy MedReleaf. Even if it doesn't, I think consolidation in the Canadian marijuana industry will continue. Marijuana is a commodity. As with other agricultural products, there are economies of scale to be gained with larger operations.

My view is that sooner or later big tobacco manufacturers will want to claim a stake in the rapidly expanding marijuana market. These companies would probably find larger marijuana growers with low-cost production more appealing than smaller players. Mergers and acquisitions between the top Canadian marijuana growers only make sense if this scenario unfolds like I think it will. Even if Aurora Cannabis doesn't buy MedReleaf, more deals are probably on the way.