Please ensure Javascript is enabled for purposes of website accessibility
Log In Help Join The Motley Fool
Free Article Join Over 1 Million Premium Members And Get More In-Depth Stock Guidance and Research
By Ashraf Eassa - May 28, 2018 at 8:45AM

DIGITIMES says that adoption of Intel's latest data center chips is being held back by high prices.

About 10 months ago, chip giant Intel (INTC 1.46%) unveiled its latest processors aimed at data center applications, known as Xeon Scalable. These new chips, which are based on the company's Skylake-SP processor architecture and are manufactured using its 14nm+ technology, offered significant performance and feature benefits relative to their predecessors based on the Broadwell architecture.

However, according to DIGITIMES, sales of these new Xeon Scalable chips were supposed to experience "a golden gross" in replacing their predecessors in the marketplace -- in other words, sales of Xeon Scalable chips would surpass the older-generation parts as a percentage of Intel's total data center chip sales. 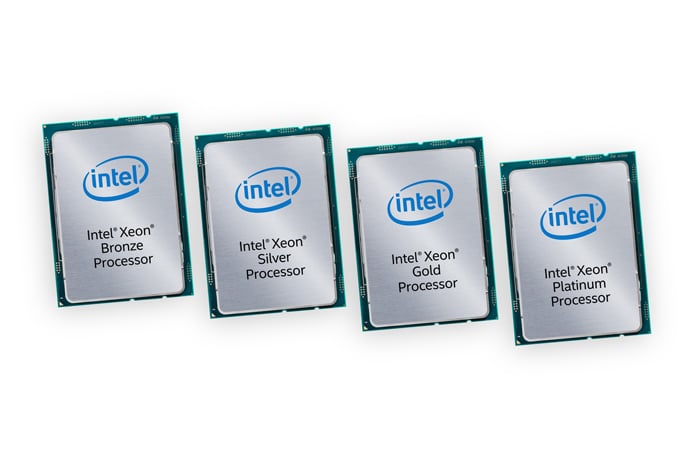 That so-called "golden cross" hasn't yet happened, though some market observers apparently think that the Xeon Scalable chips will make up 70% of the company's data center chip sales "by the end of 2018 at the earliest."

The reason for the reportedly slow adoption of the Xeon Scalable processors? Price. Intel supposedly priced its newest-generation Xeon Scalable parts meaningfully higher than their predecessors, which is pushing potential customers to go with Intel's cheaper, older-generation parts.

Does this report from DIGITIMES jibe with Intel's commentary on its most recent earnings call? Let's dive in.

On the accompanying earnings conference call, Intel chalked up this strong financial performance to "broad-based demand strength across all DCG segments" as well as a "customer preference for high-performance products, including Xeon Scalable."

At first glance, it might seem as though Intel's DCG platform average selling price performance, as well as management's glowing commentary, contradicts the DIGITIMES report, but I don't think that these facts are contradictory.

If we look at the results on a year-over-year basis, keep in mind that in the year-ago quarter, Xeon Scalable parts hadn't even formally launched (though Intel was shipping pre-release parts to major customers via its early ship program), so Xeon Scalable represented a minimal portion of Intel's DCG revenue.

So, if we assume that, year over year, the percentage of Intel's DCG revenue from Xeon Scalable grew significant and we assume that those chips were meaningfully more expensive than their predecessors, then that'd have naturally bumped average selling prices up. Intel doesn't need to have achieved the "golden cross" that DIGITIMES refers to in order to have enjoyed a significant year-over-year boost thanks to the Xeon Scalable introduction.

Moreover, Intel's average selling price growth story needn't have come entirely from a shift from the Broadwell parts to Xeon Scalable -- Intel's customers may simply have chosen to buy higher-end versions of the Broadwell parts last quarter than they did in the year-ago quarter. In fact, Intel's statement specifically said "customer preference for high-performance products, including Xeon Scalable" (emphasis mine) -- this is a far cry from saying that this average selling price boost was due exclusively or even mostly to the Xeon Scalable product introduction.

It's perfectly reasonable, then, to believe what DIGITIMES is saying about the relative adoption of Xeon Scalable even if we keep in mind DCG's strong unit shipment and average selling price performance last quarter.

Intel's overall strategy in the data center is to optimize its overall revenue and profits. Such revenue and profit growth can come from both selling more chips at roughly the same prices as before, selling the same number of chips as before but with each chip being more expensive, or -- in the ideal scenario that materialized last quarter -- from selling more chips at higher average selling prices.

Based on Intel's financial results in DCG in 2017 (during which platform average selling prices and unit shipments grew by 4% and 5%, respectively) and its results for the first quarter of 2018, the strategy seems to be working, delivering solid revenue and profit growth for stockholders.

The trick for Intel now will be to continue that performance in 2019 and beyond as competitive pressures intensify. Both Intel CEO Brian Krzanich and Intel chief engineering officer Murthy Renduchintala have recently expressed their views that they can continue to put out leadership products for the foreseeable future, but competitors have also expressed confidence that they can take significant share from Intel.

It'll be interesting to see whether Intel or its competitors are proved correct.