Music-streaming pioneer Pandora (NYSE:P) has just released a new tier for its on-demand Premium music streaming service. Premium Family plans are now available for $15 per month and can include up to six users. The new offering largely resembles comparable plans offered by rivals Spotify Technology (NYSE:SPOT) and Apple. Both of those larger competitors have long offered family plans at the same price point. Pandora's Premium Family plan includes a feature called "Our Soundtrack," which is a personalized playlist that is created based on a combination of all family members' listening preferences.

Here's what the new tier means for investors. 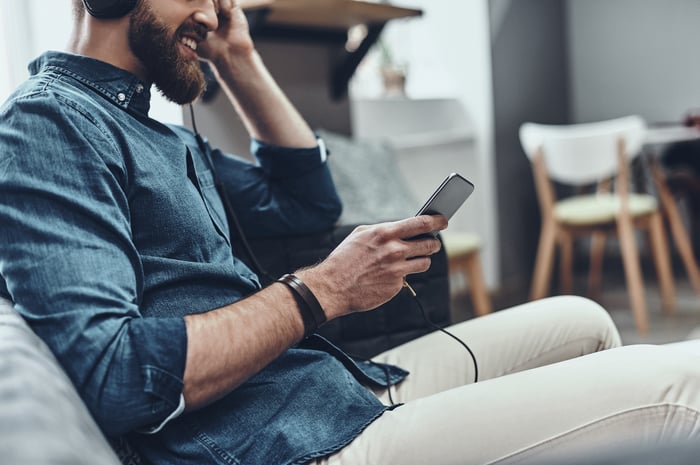 By looking at what happened to Spotify's business after the Swedish company introduced family plans in 2014, investors can get a sense of what might play out for Pandora. Spotify has seen average revenue per user (ARPU) decline meaningfully in the years since, which is expected since the plans allow more users to join and use the service at discounted rates. However, the upside is that churn has declined substantially as well, as family plans tend to enjoy much higher retention rates.

"From a product perspective, while the launches of our Family Plan and our Student Plan have decreased Premium ARPU (as further described below) due to the lower price points per Premium Subscriber for these Premium pricing plans, each of these Plans has helped improve retention across the Premium Service," Spotify wrote in its F-1 Registration Statement.

How family plans may affect Pandora

Pandora offers different tiers than Spotify, though, so the impact will be harder to predict. In addition to Pandora Premium, there's also Pandora Plus, which costs $5 per month. Pandora Plus is the ad-free version of Pandora's flagship personalized internet radio service. Pandora's user base is also mostly free ad-supported users.

Unlike Spotify, Pandora has been steadily growing ARPU, mostly from adding new Pandora Premium subscribers, who pay more than Pandora Plus subscribers. Pandora Premium launched less than a year ago. Introducing a family plan could undermine some of that ARPU growth for the same reasons why family plans hurt Spotify's ARPU, although it would be worth it if Pandora can bolster user retention. Too bad Pandora does not report user churn.