Please ensure Javascript is enabled for purposes of website accessibility
Log In Help Join The Motley Fool
Free Article Join Over 1 Million Premium Members And Get More In-Depth Stock Guidance and Research
By Michael Douglass - May 30, 2018 at 9:54PM

If the growth runway is long enough, valuation doesn't matter that much.

To be more precise, it's trading at 2.9 times tangible book value (TBV). That's undeniably expensive for any bank; generally, you hope to see that ratio closer to 1.2 to 1.5 times TBV.

But you pay up for quality. Here's why it's worth it.

Look at basically any typical bank growth, profitability, or credit quality metric, and BofI knocks it out of the park. Let's start with growth. BofI increased its loan portfolio by 15% year over year (and broader assets up 11% to $10 billion), and on the flip side, boosted deposits by 17% year over year to $8 billion. Diluted earnings per share grew by 27% in tandem with net income (which increased by 25%) -- a good sign that the company isn't diluting current shareholders to purchase growth. That growth is also increasingly diversified. While 49% of BofI's loans and leases are single-family mortgages and 21% multifamily (its historic bread and butter), 17% are now commercial and industrial, and the company also has a small but rapidly growing auto loan segment. 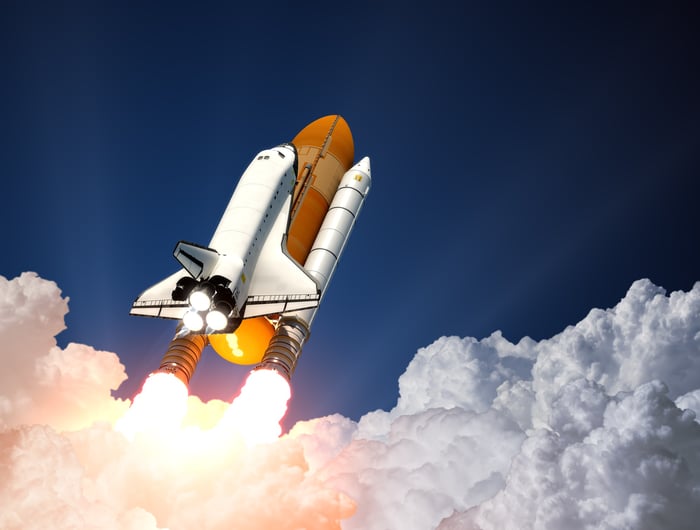 To get that kind of growth, you wouldn't be shocked to see the company letting some profitability go on the margins. Instead, net interest margin increased to 4.8% from 4.2% in the year-ago quarter. That's impressive growth, although not entirely unexpected given that interest rates have been increasing. BofI's efficiency ratio last quarter was 32.4%. A bank is doing really well if it's under 50%. That's how powerfully BofI's branchless system functions to reduce costs. What this all means at its core is that BofI isn't sacrificing margin for market share. That's a great sign of a business with an underlying advantage (in this case, low costs) that can help it continue to grow profitably.

Of course, all of this doesn't mean much if credit quality is poor. Fortunately, BofI doesn't have that problem, either -- it's getting these yields with high-quality borrowers, with the average FICO score for single-family jumbo loans at 713, agency conforming loans at 751, and auto loan at 773. The company reported a 0.02% net charge-off rate and a 0.39% nonperforming asset to total asset ratio last quarter.

Most lenders can do well when the economy's growing and the credit cycle is favorable, but the real question is how they do when things sour. Fortunately, BofI doesn't have a problem there, either -- the highest its nonperforming loan ratio got during and after the financial crisis was 1.5% in 2010, a number far below most other banks. Even in the worst of times, things were just fine at BofI.

Now, here's where I should note: BofI has had some rough times, too. There were some pretty scary accusations leveled at management, and a 16-month investigation by the Securities and Exchange Commission. The investigation was ultimately shut down without any charges being brought, which is a positive sign, but you should be aware of that history before considering an investment in the company (hence why plenty of shares remain sold short).

There's a temptation with banks to focus strictly on metrics -- valuation of X + return on equity of Y means a company's undervalued by Z%. That might work for the big banks, which will struggle to materially grow in the coming years given the huge portion of the market they already own. And, of course, as I noted above, metrics are necessary to help you get a handle on present growth, profitability, and loan quality. I would argue that BofI is a solid buy based strictly on its metrics.

But what those metrics often undervalue is the long-term growth opportunity for a well-run, fast-growing (one might even argue disruptive) company. It's hard to value what a company's optionality should be worth. What might BofI be worth if it expands meaningfully into agency conforming single-family home loans? Or perhaps builds out a huge online lending platform? Or starts playing in more jumbo home loan markets?

These are the sorts of options that its solid deposit base, strong loan quality, and enviable profitability give BofI's management. Of course, that growth opportunity comes with risks -- will they compromise loan quality in the pursuit of expansion? -- and that's why any investor thinking about optionality has to trust that management is both honest and competent.

BofI's past history gives me that confidence. And so I remain a very happy shareholder who would gladly pick up more shares today.