Please ensure Javascript is enabled for purposes of website accessibility
Log In Help Join The Motley Fool
Free Article Join Over 1 Million Premium Members And Get More In-Depth Stock Guidance and Research
By Rich Smith – May 30, 2018 at 11:07AM

Never underestimate the power of a cheap stock price to deliver powerful profits to investors.

Shares of Dick's Sporting Goods (DKS 0.00%) cost a mere 13 times earnings today, according to data from Yahoo! Finance. Yet this very cheap stock is delivering very big profits to investors this morning, with Dick's shares up 27.9% as of 11:35 a.m. EDT. The reason, as you may have guessed, is earnings.

Dick's has just reported earning a $0.59-per-share profit for its fiscal first quarter of 2018, easily beating analyst predictions for $0.42. Sales, at $1.91 billion for the quarter, likewise trumped estimates, albeit by a smaller margin. 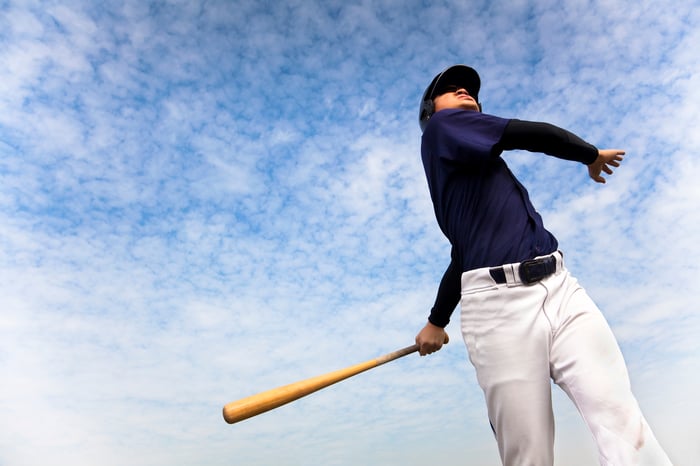 Earnings are out, and Dick's hit it out of the park. Image source: Getty Images.

Dick's quarterly sales increased 4.6% year over year, spearheaded by a 24% jump in online sales. Profits rose 13.5% from the $0.52 per share reported one year ago -- roughly three times as fast as sales. CEO Edward Stack credited "higher merchandise margins" for the increase in profits, and noted that the company was able to move merchandise despite offering "fewer promotions" during the quarter, as "product newness, strength in our private brands and a more refined assortment led to a much healthier business," obviating the need for putting merchandise on sale.

And in a bullish note for worriers over Amazon's obvious dominance online, Dick's also noted that "investments in our digital experience" are paying dividends, and the company "will continue to invest as we build the best omni-channel experience for all athletes."

In support of this prediction, Dick's raised guidance for the rest of this fiscal year, and now says it expects to earn between $2.92 and $3.12 per share, even if sales are only "flat to a low single-digit decline," as anticipated. If sales continue to exceed expectations, however, or if Dick's per-share earnings benefit from stock concentration resulting from share buybacks, earnings could conceivably go even higher.

John Mackey, CEO of Whole Foods Market, an Amazon subsidiary, is a member of The Motley Fool’s board of directors. Rich Smith has no position in any of the stocks mentioned. The Motley Fool owns shares of and recommends Amazon. The Motley Fool has a disclosure policy.