Please ensure Javascript is enabled for purposes of website accessibility
Log In Help Join The Motley Fool
Free Article Join Over 1 Million Premium Members And Get More In-Depth Stock Guidance and Research
By Asit Sharma – May 31, 2018 at 3:56PM

Kohl's (KSS -0.75%) fiscal first-quarter 2018 results, released on May 22, reveal its momentum even as many fellow brick-and-mortar retailers struggle with an industry shift to e-commerce, and rapidly evolving consumer purchasing habits. Kohl's reported revenue growth of 3.5% over the last three months, to $4.2 billion, and boasted a 3.5% lift in comparable-store sales.

During the company's earnings conference call with analysts, management described various new and ongoing initiatives that are intended to support growth throughout the fiscal year. Below, we'll review three important quotes from the call that illuminate the company's current direction. 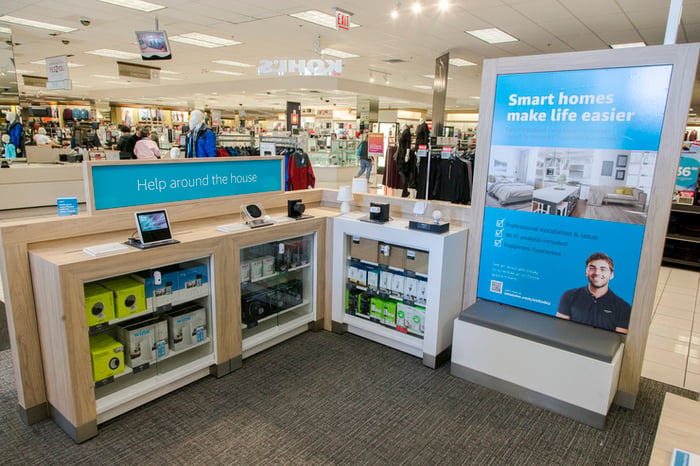 We continue to see great success with our national brands, which are up 6% during the quarter and which now represent 60% of total sales. As I mentioned, active continues to outperform the company, increasing 10% in Q1 driven by our top three active brands, Nike, Under Armour, and Adidas.

Kohl's recent concentration on huge activewear brands has helped improve revenue perhaps as much as any other sales initiative. On the principle of allocating more resources to outperforming revenue streams, Kohl's will conduct a test in 30 stores during August, which will expand the square footage devoted to active lines by 40%. Management estimates that this will increase customer choices in activewear by 50% within the test stores.

Gass also touched on a targeted customer group that has some overlap with activewear customers: millennial women. Kohl's announced alongside earnings that it's teaming up with privately held lifestyle media publisher PopSugar to introduce a PopSugar-branded line of apparel this year. According to Gass, PopSugar has an audience of 100 million readers online, and claims 31 million social followers. Kohl's intends to tap into this base to inform and shape the apparel offerings, and expects that both companies will enjoy cross-marketing opportunities from the new relationship.

2. It has incentivized cost savings

In addition, shipping costs were better than expected, benefiting from higher Buy Online Pickup In Store demand, or BOPIS demand, and shipping efficiencies driven by our technology investments. As a result, our gross margin increased 50 basis points, which exceeded our most recent guidance.

Kohl's has continually nudged customers to order online in the most cost-effective manner for the company. BOPIS is popular with customers, as they can avoid shipping costs when buying inventory already available in stores.

This year, Kohl's will roll out a "buy online, ship to store" option, dubbed BOSS. It maintains the savings of in-store pickup, but customers will have access to a wider inventory than with BOPIS, which is centered on inventory already on shelves.

Both methods have helped Kohl's maintain margin as it gradually builds out fulfillment capabilities in e-commerce. On the earnings call, management mentioned that Kohl's is now constructing its sixth e-commerce fulfillment center, which will rely heavily on automation to process orders.

During the current earnings season, most retailers reported some form of earnings headwinds due to rising shipping costs. It's notable that BOPIS helped Kohl's minimize shipping costs, while also providing the overall margin bump mentioned by Besanko above. That Kohl's is increasing both total revenue and comparable sales while maintaining margin indicates underlying strength in core customer loyalty and shopping patterns.

We continue to make significant progress on our standard-to-small initiatives ... In 2017, we aligned space to sales potential in approximately 300 of our lower-volume prototype stores by editing the floor pads to tailor to local brand and category preferences, and removing more than 100 fixtures per store ... In 2018, we plan to convert an additional 200 stores.

As I described earlier this year, Kohl's standard-to-small program trims store selling space in an effort to optimize sales per square foot, while avoiding the costs attached to inefficient, oversized selling areas.

Standard-to-small is one half of an equation that insulates Kohl's from the industry pressures of declining physical retail sales. The other half is the maintenance of high traffic in stores, whether optimized by standard-to-small or not.

The company is experimenting with new methods to pull patrons in, even if a Kohl's shopping trip is not the primary purpose of the visit. As customers enter Kohl's premises for any reason, the chance for incremental sales improves. During the earnings call, Gass noted that Kohl's pilot program with Amazon.com to provide return centers within Kohl's locations has seen success in its first six months, although no quantitative data has yet been disclosed.

Also, Gass pointed to the company's upcoming effort to segregate unused space at selected locations and sublease these areas to other retailers. The first test, previously announced as a partnership with privately held German grocer Aldi, is on track for a 2018 launch.

Gass said that any units within this pilot program would exist as separate stores having their own entrances. However, it's easy to visualize a common flow-through opening connecting both a Kohl's location and an adjoining Aldi. Kohl's doesn't need the rental income, but it could certainly use the incremental traffic. Shareholders can expect more innovative methods to entice both loyalists and new customers in the coming quarters, as buoyant traffic has so far enabled Kohl's to buck the larger, gloomier physical-retail trend.