Please ensure Javascript is enabled for purposes of website accessibility
Log In Help Join The Motley Fool
Free Article Join Over 1 Million Premium Members And Get More In-Depth Stock Guidance and Research
By Asit Sharma – May 31, 2018 at 6:04PM

A look at important revenue and earnings drivers that the company identified for investors earlier this year.

If you're invested in Grupo Aeroportuario Del Pacifico (PAC -3.74%), you've probably gathered that it's no cakewalk to obtain useful information on the Mexican airport operator. The company's earnings filings contain some ingrained complexity due to reporting in the Mexican peso as a monetary unit. Further, adjustments under International Financial Reporting Standards have to be taken into account each quarter to understand operational performance.

But thankfully, Grupo Aeroportuario del Pacifico, or "GAP," as management refers to the company, has issued two useful documents this year: a 2018 corporate presentation released in January and a more comprehensive slide deck for investors issued during its shareholders meeting on March 9. These presentations cover aspects of the company's finances, strategy, and operations while providing important information on the Mexican and larger Latin American aviation markets.

I've distilled some major points below that illustrate GAP's growth potential and that I believe investors should be aware of. But take the time to run through one or both presentations if you hold shares -- they're both quite useful for understanding the business case behind an investment in GAP. 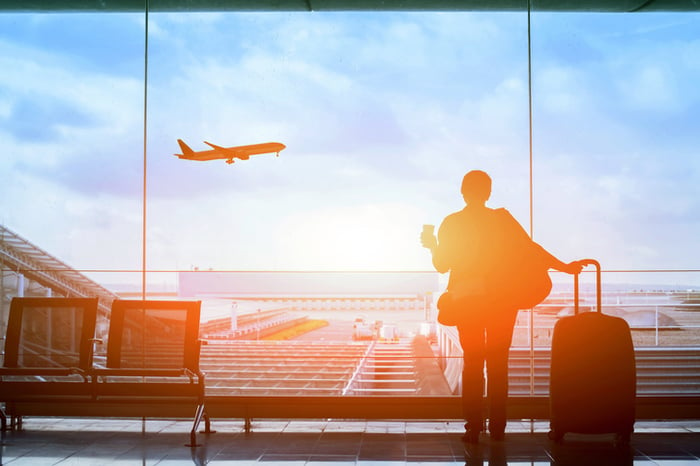 Between 2011 and 2016, air passengers per capita in Mexico rose from 0.22 times to 0.42 times, meaning that by 2016, Mexican air travel grew to a little less than a half flight per person. Chile, by comparison, boasted nearly one flight per person within its population (0.96 times) in 2016.

In Mexico, the rate of ground travel between 2012 and 2016 increased at a compounded annual growth rate, or CAGR, of 1.9%. Compare this to air travel, which expanded at a rate of 9.8%. On a related note, there are currently 96 bus passengers for every domestic passenger flown by Mexican airlines, indicating there's much room for an uptake in air travel.

Taken together, these various statistics demonstrate that, while Mexico is one of the more prosperous Latin American countries, it's still at a relatively early point in its economic development. GAP stands to benefit for years as this young economy continues to grow and the disposable income of its citizens rises in tandem.

If the domestic passenger market is set to scale over the long term, what will key the company's growth on a near-term basis? GAP lists several key drivers in 2018 in its presentations. These include a growing wave of tourism -- Mexico figured as the eighth most popular global tourist destination in 2017. In addition, remittances (money that Mexicans overseas send home) from the U.S. continue to rise and hit over $26.1 billion last year. Remittance flow from the U.S. is a major source of Mexican domestic consumption spending power.

Grupo Aeroportuario also cites Mexican carrier fleet expansion and the opening of new routes by domestic airlines and U.S.-based low-cost carriers as a significant force in improving its revenue and earnings. In regular coverage of GAP's quarterly earnings, I often have noted the brisk pace of domestic and international route openings among GAP's 12 Mexican airports.

Last year, GAP reported an increase of 11.3% in total domestic terminal passenger traffic and an improvement of 11.5% in international terminal traffic. The company has enjoyed double-digit passenger traffic growth for the last two years, due in part to the diversity of its holdings.

The airport operator owns an enviable mix of locations within its Mexican airport portfolio, from business centers like Guadalajara and Tijuana to resort destinations including Los Cabos and Puerto Vallarta. The balance between commerce and leisure-based airports provides some insulation from the economic volatility that an emerging market like Mexico cyclically experiences.

The company points out that, while it doesn't have airport rights in the country's largest city, Mexico City, a new Mexico City airport under development won't be able to handle passengers until 2021, giving competing airports time to consolidate alternate routes with carriers.

Below, you can see that five of GAP's airports land in the top 10 Mexican airports in terms of passenger traffic: 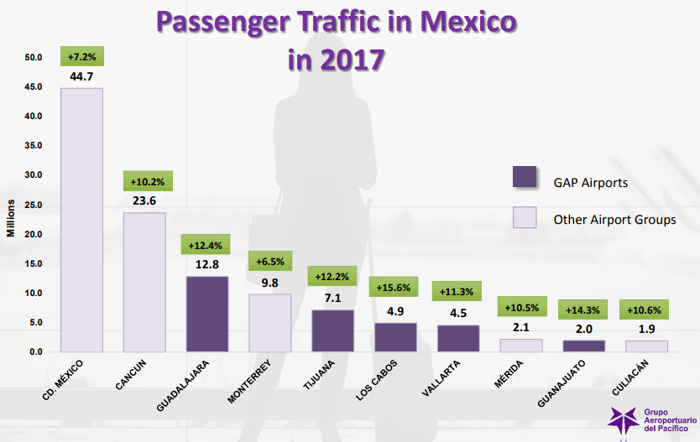 It also is notable that two of these airports, Los Cabos and Puerto Vallarta, ranked as the third and fourth, respectively, fastest-growing airlines in Latin America last year in terms of seat growth.

While rising domestic passenger travel certainly is boosting GAP's terminal traffic fee revenue, it also is lifting the opportunity for various ancillary revenue streams, which GAP management refers to as "non-aeronautical services." These services include car rentals, airport parking, VIP lounges, duty-free shops, and third-party retail operations. The company is looking to expand its non-aeronautical revenue through the remodeling of terminals, food courts, and other infrastructure in each of its domestic airports and its single international airport in Montego Bay, Jamaica.

GAP will spend about $1.89 billion pesos on capital expenditures in 2018, or roughly $374 million, to renovate and enhance its physical premises. And the company is branching out in its quest for revenue enhancement. GAP recently received approval to construct a hotel at the Guadalajara airport, marking the company's first foray into the hospitality business. Construction will begin in 2019.

The Mexican aviation market may be growing considerably, but GAP isn't complacent -- it proactively is expanding its reach as the market widens.