After a relatively strong first half of its fiscal year, Cantel Medical (NYSE:CMD) slowed down a little in its third fiscal quarter. And things don't look like they're going to pick up anytime soon with the medical device maker lowering revenue guidance for the fiscal year, causing shares to drop 16% yesterday.

What happened with Cantel Medical this quarter? 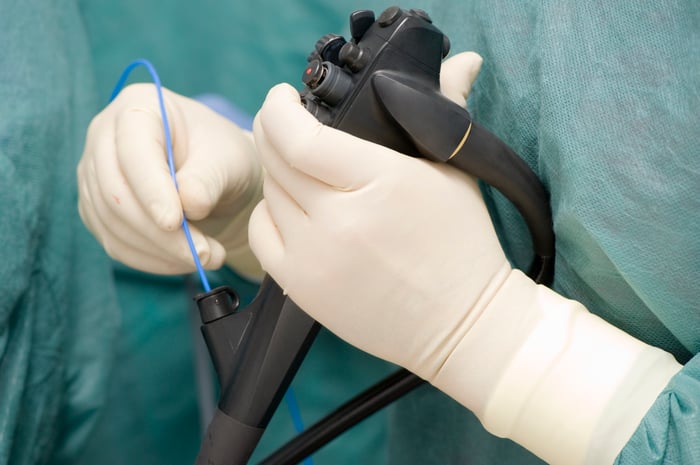 After comparing the 2011-12 boom to the last two years, chief financial officer Peter Clifford explained why the company now expects slower growth in capital spending by its customers:

You can really see there's been more than a pull-ahead effect, where the 2 years following those bubbles, the business has been pretty flat on capital. I think honestly that's probably what we didn't see when we started the year that we're seeing as we get to the back half of this year on the endoscopy business is that U.S. capital is going to be a little bit tougher environment than what we anticipated.

Nevertheless, Cantel is still looking for acquisitions where it can find strategic fits, as outlined by Seth M. Yellin, Cantel's executive vice president of strategy and corporate development:

I think from the acquisition perspective, we're pretty happy with where we're at in the pipeline overall and the opportunities we see in front of us, both in our existing businesses and in near adjacencies that we think could be good long-term growth drivers for the company with new technologies and new markets that could be really interesting drivers for us in the medium to longer term as well.

Instead of 13% to 14% year-over-year sales growth this fiscal year, management thinks sales growth will come in at 12.5% to 13%, which doesn't sound too bad -- except that the year-to-date growth sits at 13.9% through the first three quarters, so management is predicting quite a slowdown of growth in the fiscal fourth quarter. And investors should assume Cantel will see slower growth in fiscal 2019, as Clifford highlighted.

Fortunately on the bottom line, adjusted earnings per share will actually be going up, although that's entirely due to the new tax law. Excluding that benefit, the non-GAAP earnings outlook remains unchanged, which investors can take as a win considering slowing revenue.