Coca-Cola (NYSE:KO) and PepsiCo (NASDAQ:PEP) made their names peddling sugary drinks. Traditional soda sales, however, have been falling, forcing both companies to diversify their portfolios. That's led both Coke and Pepsi into waters, juices, and other healthy drinks.

Coca-Cola has remained a pure beverage company: It owns everything from its classic soft drink brands to Powerade, Honest Tea, Glaceau, and Dasani. PepsiCo, on the other hand, has expanded its reach beyond drinks. The company owns multiple snack chip lines (including Doritos, Tostitos, and Fritos to name a few) and has a portfolio its calls its "Better for you" line, which includes Baked Lays potato chips, Stacy's Pita Chips, and Smartfood popcorn.

Now Pepsi has made another move to expand its offering of healthier choices. The company has reached a deal to purchase Bare Foods Co, which makes Bare Snacks, a line of fruit and vegetable snacks. 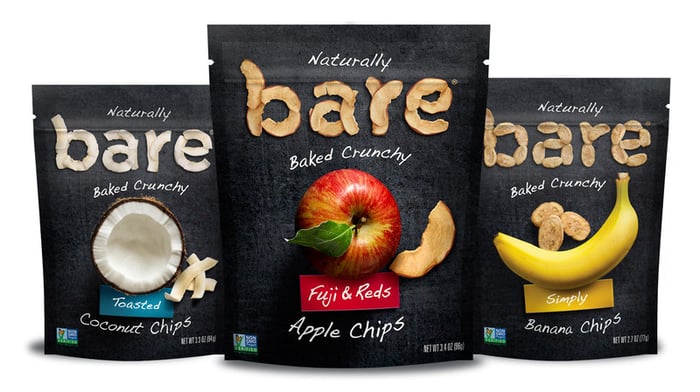 What is Pepsi doing?

The market for soda has been steadily declining in the United States. That's true for diet brands as well, which many consumers no longer see as a healthy alternative to full-calorie soft drinks. PepsiCo has managed to offset those declines by growing its non-soda beverage lines and its snack portfolio, and the purchase of Bare fits into its strategy of diversifying into products that consumers see as being healthier choices.

"For nearly a dozen years, PepsiCo has been committed to Performance with Purpose, our vision of making more nutritious products, while also reducing added sugars, salt, and saturated fat," said PepsiCo. CEO Indra Nooyi in a press release. "Bare Snacks fits perfectly within that vision."

Bare is a prime example of a company looking to create healthy snacks that consumers actually like. The company began selling baked apple chips at local farmers' markets in 2001 and steadily expanded, becoming a leader in apple, banana, and coconut snacks. It recently added vegetable chips to its line, and all of its products are baked, not fried. According to the press release, they are also Non-GMO Project-verified and have "clean" labels.

Healthy snacks are an emerging market, and Bare has shown it can create products people want. In buying the company PepsiCo gets a proven brand that will benefit from its ability to plug it into its existing distribution channels.

On its own, Bare had limits to how much and how fast it could grow. As part of PepsiCo, the healthy snacks brand can be rolled out into more locations with an enhanced marketing push.

This is Pepsi buying something it probably would have had trouble creating. Instead of taking that risk -- and risking failure -- the company has purchased something that's already working. Bare will continue to operate independently from its headquarters in San Francisco, with its leadership reporting to PepsiCo's Frito-Lay North America Division.

That's a smart move that should help Bare maintain its integrity and its credibility with its audience. PepsiCo. brings a powerful ability to expand the reach of the company's healthy snacks, and this deal should be a winning one for both companies, as well as Pepsi shareholders.