Shares of Genesco Inc (NYSE:GCO) were falling today after the diversified apparel and footwear retailer posted a disappointing first-quarter earnings report. The company reported a loss in the period as it continues to struggle with the shift to e-commerce and declining mall traffic. As of 11:34 a.m. EDT, the stock is down 12.4%.

Comparable sales in the quarter dipped 1% as store-based comps were down 2% and e-commerce sales were up 10%. Overall revenue in the period was essentially flat at $645 million, which was ahead of $638 million estimates. Journeys, the company's biggest chain making up nearly half of Genesco's sales, saw strong growth in the period with comps up 6%. However, performance at Lids and Schuh was weak. 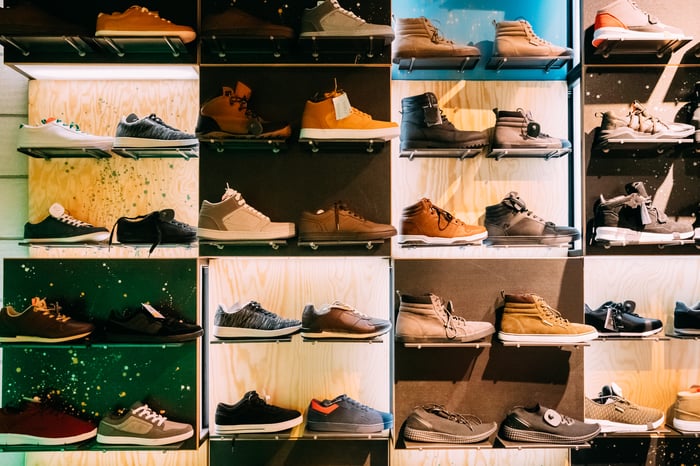 Operating income fell as selling, general, and administrative expenses increased 80 basis points, however, the company said adjusting for exchange rates, those expenses would have been flat. Still, adjusted earnings per share fell from $0.06 the year before to a loss of -$0.06, which beat estimates by $0.01.

"Our first quarter results in total were within the range of our expectations, as continued strength in our U.S. retail footwear businesses helped to offset in part challenges in our other operating divisions," said CEO Robert Dennis. "However, we deleveraged expenses due to negative store comps, resulting in profitability below last year's level but consistent with our forecast."

Genesco maintained its full-year guidance calling for comparable sales growth of flat to 2% and adjusted EPS of $3.05-$3.45, in line with estimates. Given that guidance and results were in line with expectations, the sell-off is a little puzzling, but it may just be a correction after the stock had gained nearly 40% this year on optimism about the improving retail sector.

Despite the sell-off, Genesco's shareholders should be reassured after today's report as the company's performance, especially with Journeys, is showing fundamental improvements.