Some squeezes can be good news for stocks. A short squeeze, for example, where short-sellers frantically scramble to cover their short positions, drives a stock higher. But not every kind of squeeze is good news.

In a recent interview with Midas Letter, Aphria (NASDAQOTH: APHQF) CEO Vic Neufeld warned that a different kind of squeeze could be on the way that could devastate some Canadian marijuana growers. Neufeld's squeeze scenario is one where Canadian provincial authorities will demand lower prices in the not-too-distant future. When that happens, he thinks "the strong will survive, but the weak will not."

Is a squeeze really on the way for some Canadian marijuana stocks? And if so, who will be the survivors? 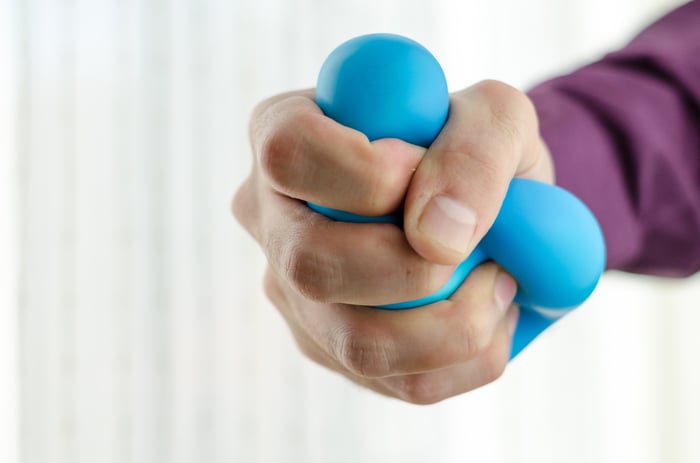 Some observers predict that there will be a supply glut in Canada after recreational marijuana is legalized. Vic Neufeld doesn't see it happening -- at least not at first.

Neufeld told Midas Letter's James West that he expects some licensed producers (LPs) in Canada to fail to live up to their commitments when the recreational marijuana market in Canada opens up full throttle. He acknowledged that many of these companies have issued press releases touting their expansion plans. However, Neufield seriously doubts that all of them will be able to produce the amounts of marijuana they're saying they'll be able to deliver.

This would create a situation where LPs that really do have ample capacity could step in and pick up the business that the others couldn't handle. Neufeld, of course, thinks Aphria will be in a position to gain additional market share when this happens.

However, he doesn't think this environment will last for too long. Neufeld predicts that supply will exceed demand in Canada by late 2019. At that point, he expects authorities in the provinces will ask for price concessions. Marijuana growers that can't produce at low costs won't be able to compete.

Neufeld thinks there could be "forced consolidation" for smaller marijuana growers to survive. But larger players like Aphria would be able to buy their smaller rivals at bargain prices.

Only time will tell if Vic Neufeld's prophecy comes true. However, I suspect he'll be proved more right than wrong.

I especially think Neufeld's prediction of an initial period where demand outstrips supply followed by a supply glut is spot on. Many marijuana growers are scrambling to increase their production capacity, but those efforts won't be completed for many of them until into 2019 or, in some cases, 2020. Remember also that some of these companies have never cultivated marijuana before on a mass scale. It's entirely possible there could be delays with their planned schedules.

Because of these factors, there probably won't be enough supply to meet demand at first. Granted, the availability of marijuana on the black market in Canada could cause the supply demand imbalance to be less of an issue than it otherwise would be. However, my view is that the recreational market in Canada will have a similar trajectory as the one in Colorado, where legal marijuana demand has steadily increased.

I also agree with Vic Neufeld that a supply glut will come to Canada at some point. I'm not sure if this will happen in late 2019, as he expects, but that timing isn't unrealistic. The laws of supply and demand dictate that when supply exceeds demand, price falls. My take is that Neufeld is right that price concessions will be inevitable.

When marijuana prices drop, the scenario that Neufeld envisions will unfold is highly likely to come to pass. Only the suppliers with low-cost infrastructures will remain competitive. Those that can't operate profitably with low prices will either sell out or shut down.

If Vic Neufeld is right -- and I firmly believe he is -- does it mean investors should avoid all Canadian marijuana stocks? Not necessarily.

The strongest businesses will survive, and I'd put Aphria into that category. Aphria is already able to produce medical marijuana for less than 1 Canadian dollar per gram. The company is also on track to have annual production capacity in the ballpark of 230,000 kilograms by early 2019.

My view is that Aphria stock has the potential to move 50% higher, and perhaps even more, over the next couple of years. How could this happen with the potential of a supply glut in Canada? Don't forget the expanding global marijuana market. I think international opportunities for Aphria should keep the company from experiencing a squeeze for a long time to come.