Royalties and distribution costs gobble up nearly 80% of Spotify Technology's (NYSE:SPOT) revenue, which doesn't leave a whole lot left over to cover other operating expenses. The company has disruptive potential in cutting out record labels to some degree, which could improve its cost structure while incrementally transforming the industry's economics. To be clear, the major record labels will always have their place in the value chain, providing a plethora of services to develop artists, but there does seem to be an opportunity for smaller, independent artists to connect directly with listeners via Spotify.

Even primary rival Apple is getting into music publishing. Spotify has another idea up its sleeve. 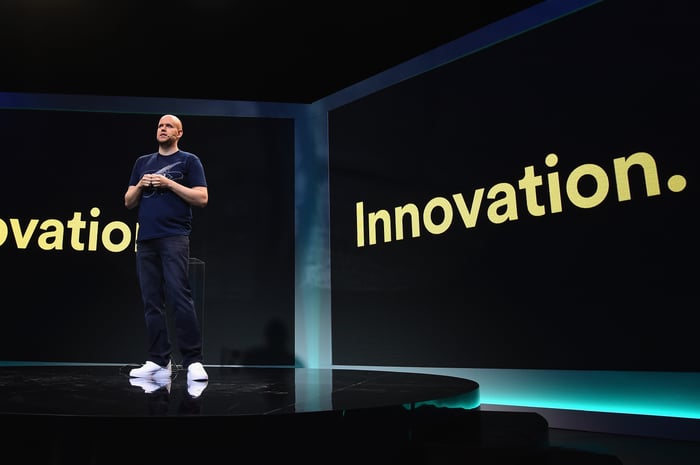 Billboard reports that Spotify has approached numerous smaller artists and managers seeking direct licensing deals. The Swedish company is offering advance fees as well as a 50% cut of revenue per stream. The outlet estimates that most major record labels in the U.S. generally take in about 54% of revenue per stream, but only 20% to 50% of that makes its way down to the artists and managers. For these proposed arrangements, Spotify would effectively be cutting out the record labels and getting direct licenses for the content. That would leave a lot more to go around for both Spotify and artists: Spotify would pay out less than it would normally have to, while artists would earn more as well.

Importantly, Spotify is structuring these offers in a very clever way. Billboard points out that Spotify is not trying to become a record label for itself, which encompasses much, much more. The offers apply exclusively to Spotify's streaming platform, leaving the artists free to ink other deals with other platforms. The music-streaming company would not be looking to own the copyrights, a core aspect of how labels operate. Additionally, Spotify would not be trying to get a cut of revenue generated from outside its platform; traditional labels and distributors get a cut of all revenue generated across all platforms and services. That would allow artists to retain significant flexibility beyond Spotify.

It's worth noting that Spotify's existing licensing agreements with record labels preclude it from directly competing with them, but Spotify appears to be managing this risk with the unique structure of the offers, as well as the fact that it's currently going after less prominent artists.

Spotify renegotiated its licensing agreements last year, which has dramatically reduced its royalty burden and allowed for gross margin expansion. For example, cost of revenue in the first quarter was 75% of sales, down from 88% a year ago.

The company pays varying royalties that are affected by a number of factors, such as whether the user is a premium subscriber or ad-supported, what country the user is located in, and whether the user is part of a family or student plan, among others. Some of the agreements even require Spotify to hit certain targets with its user base, such as the ratio of free users to paid users or subscriber churn.

Direct-licensing agreements that are catered to the platform have the potential to incrementally reduce Spotify's costs, and considering how much time, money, and effort goes into inking and complying with licensing agreements with record labels, every little bit helps.