Synaptics' (NASDAQ:SYNA) promising start to 2018 didn't last long. The human interface solutions specialist drummed up a lot of enthusiasm by delivering a groundbreaking smartphone chip earlier this year, but it looks like the market isn't interested in what the company is offering, as its latest results indicate.

Fiscal third-quarter revenue fell 11% year over year to $394 million and the bottom line went from being in the black a year ago to being in the red this time. So what went wrong with Synaptics after it seemed all set to conquer the next hot trend in smartphones with its latest fingerprint sensor? 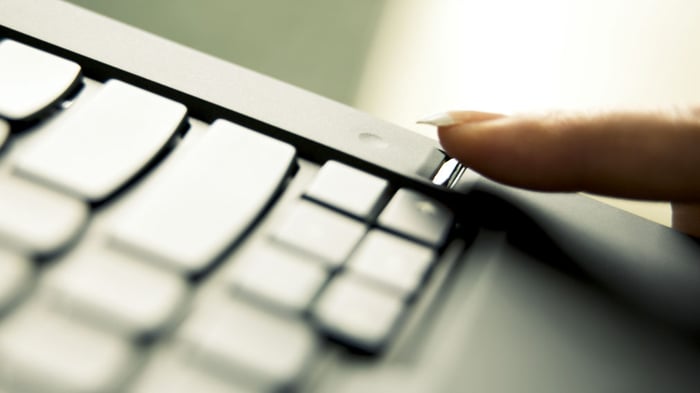 Mobile supplied 62% of Synaptics' revenue in the quarter, and the 34% year-over-year decline in the segment's revenue offset the impressive growth it recorded in the Internet of Things (IoT) and PC segments. The troubles in the chipmaker's mobile business are a result of the waning demand for capacitive fingerprint sensors, as well as the stiff competition prevalent in this commoditized industry.

For instance, Synaptics lost its lucrative Samsung contract to rival Egis Technology. This dealt a body blow to the chipmaker as Samsung was one of its largest customers, supplying 17% of total revenue. Meanwhile, Synaptics' FS9500 family of optical in-display fingerprint sensors, which were launched earlier this year, were supposed to help it tap into the growing demand for in-display fingerprint solutions. But that hasn't been the case.

As smartphones are getting more expensive with each passing generation, consumers might not be willing to pay a premium for an incremental feature such as fingerprint sensing. According to Synaptics, the traditional capacitive fingerprint sensors don't add much to the bill of materials of a device, but the optical in-display fingerprint sensor does.

This is why OEMs are delaying the addition of such a feature to their upcoming models. Synaptics cites Vivo's example to explain this. The chipmaker had expected Vivo to put its in-display fingerprint tech into each of its smartphones, but it is instead witnessing an attach rate of just 20% to 30%.

Meanwhile, Apple is reportedly planning to make its own display drivers, posing another challenge for Synaptics' mobile business as Cupertino was known to source its display drivers from the latter.

Synaptics, however, gave investors something to cheer about as well. Its IoT business shot up 300% year over year, accounting for almost a quarter of total revenue in the quarter. Such massive growth was driven by the company's acquisition of Conexant that was completed in June last year. The acquisition gave Synaptics access to the fast-growing smart-home market, as Conexant was a prominent supplier of audio development kits that enabled the integration of Amazon's Alexa virtual assistant in smart speakers.

Since then, Synaptics has landed a string of contracts for supplying these kits to companies that want to deploy Alexa in their hardware, including Harman International and NTT Docomo. IDC estimates that smart speaker sales are going to quadruple in the next five years, and this could prove to be a solid tailwind for Synaptics as Amazon's Alexa holds the largest market share in this space.

Synaptics isn't going to get out of the doldrums anytime soon as it relies on mobile for the majority of its revenue. The loss of business at Samsung, the slow uptake of in-display fingerprint sensing, and a weak smartphone scenario in general will continue weighing on its finances for the foreseeable future.

Of course, the company's IoT business has gained terrific traction of late, but it isn't as big as mobile. Not surprisingly, analysts expect Synaptics' top and bottom lines to shrink this year before a turnaround begins. So, it will be prudent for investors to watch the stock from the sidelines and look for consistently strong growth in the IoT business before making a call on Synaptics.

Synaptics Makes a Wrong Bet in Mobile, but IoT Could Be Its Savior @themotleyfool #stocks $SYNA Next Article
Current