Please ensure Javascript is enabled for purposes of website accessibility
Log In Help Join The Motley Fool
Free Article Join Over 1 Million Premium Members And Get More In-Depth Stock Guidance and Research
By Harsh Chauhan – Jun 8, 2018 at 7:09AM

Drones are going to play a key role in boosting Amazon's profitability from the e-commerce business.

The reason why Amazon is making barely any money from its e-commerce operations is due to rapidly rising costs, especially related to shipping. 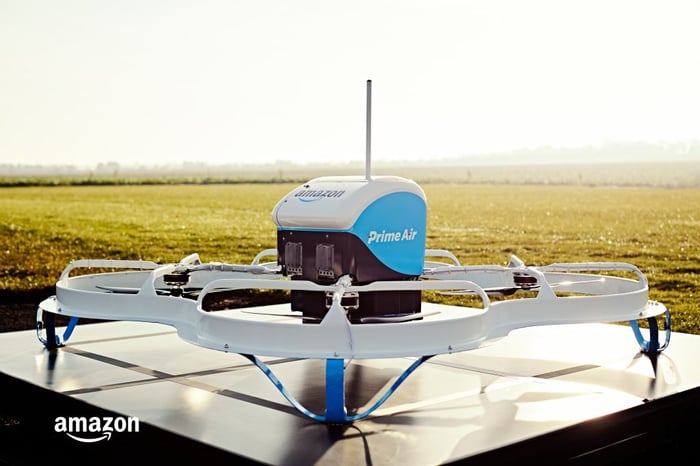 Shipping costs are a problem

Amazon's shipping costs accounted for nearly a fifth of its cost of sales last quarter, increasing 38% year over year to just above $6 billion. In fact, its shipping costs have been rising at an alarming rate quarter after quarter, as seen below.

Now, Amazon can target a reduction in shipping costs to lower its cost of sales, and eventually boost the profitability of its e-commerce business. However, the rapid growth of this cost item indicates that Amazon hasn't been able to do much to control it so far.

But this doesn't mean that the company isn't trying to get a handle on its ballooning shipping costs, and one of the possibilities that it is exploring could become a reality sooner rather than later.

Amazon captured headlines back in 2016 when it successfully made its first drone delivery  to a customer in England. Now, it won't be surprising to see drone deliveries in the U.K. taking off soon as the country's national air traffic control service is considering changing rules that will allow unmanned aircraft to fly beyond the line of sight of their human operators.

The agency aims to start testing the system by the end of the year, with full-fledged operations expected to begin in 2019 or 2020. Similar developments are on the way in the U.S. as well, with the Federal Aviation Administration (FAA) willing to alter rules as long as drones were flown keeping certain safety regulations in mind.

In fact, the director of the FAA's drone program believes that drone deliveries are closer than what many think, and he goes on to point out that there are several experimental operations that are already in progress. Amazon, on its part, believes that its Prime Air drone delivery system will have the necessary safety approvals in place for drone design and operating rules in place by next year.

What's more, Amazon is reportedly creating its own air traffic control system for drones, with help from NASA. The system is being designed to allow Amazon to make deliveries in 30 minutes in a 20-mile radius, though it is believed that it will take at least two years for drone deliveries to move from the testing phase to the commercial roll-out stage.

Now that it is likely for drone deliveries to become a reality in the next two to three years, how much of a difference could they make to Amazon's ballooning shipping costs? A lot, apparently.

According to Deutsche Bank, it costs just $1 to deliver a 5-pound-package using a drone in a 20-mile radius, as the projected cost per mile of a drone delivery is just $0.05. By comparison, truck-based deliveries can cost anywhere between $1.50 a mile to upwards of $4 a mile, depending on several factors such as the truck's mileage, fuel costs, and labor costs, among others, according to third-party logistics provider Descartes. This excludes contingencies such as traffic congestion that add to the total cost of delivery, so a truck-based delivery in a 20-mile radius could cost $30 at least.

Moreover, the costs of traditional delivery methods tend to rise over time. Fuel could become costlier, driver salaries will increase, buying and maintaining trucks will get more expensive, so shipping costs will also increase.

Buy you would be wondering how much of Amazon's deliveries are under the 5-pound benchmark. Back in 2015, Amazon CEO Jeff Bezos had claimed that 86% of the deliveries made by Amazon were below this weight limit. There's no update on this number, but assuming that the majority of Amazon's packages are still under the weight limit, the company can save a lot of money as we saw that drone deliveries could be thirty times cheaper than truck deliveries in a 20-mile radius.